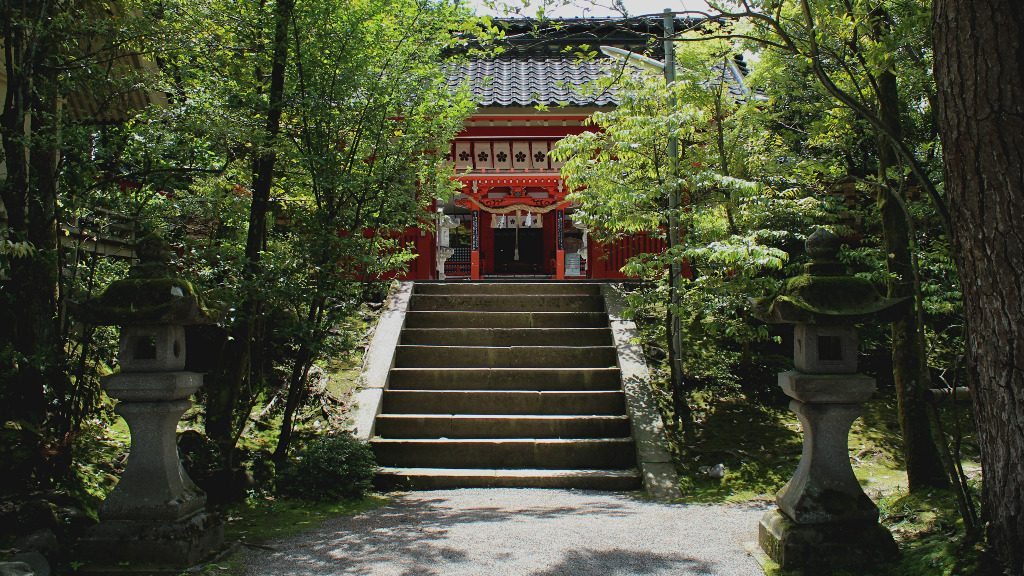 For the shrine that shares its city’s name, this shrine is conspicuously small and hidden away. As such, Kanazawa Shrine is a secret many visitors miss and even fewer know how to appreciate. The grounds of this brilliantly-colored shrine are connected to ancient folklore behind Kanazawa’s name.

Kanazawa Shrine is tucked away, just off the corner of Kenrokuen Garden. Groves of plum and pine trees obscure the view, but a pond of irises and water lilies mark the way to the inner gate. A moderately sized red torii gate is visible just across the road from the Ishikawa Prefectural Museums of Art, where a secret path along a waterfall leads through the Honda Forest. 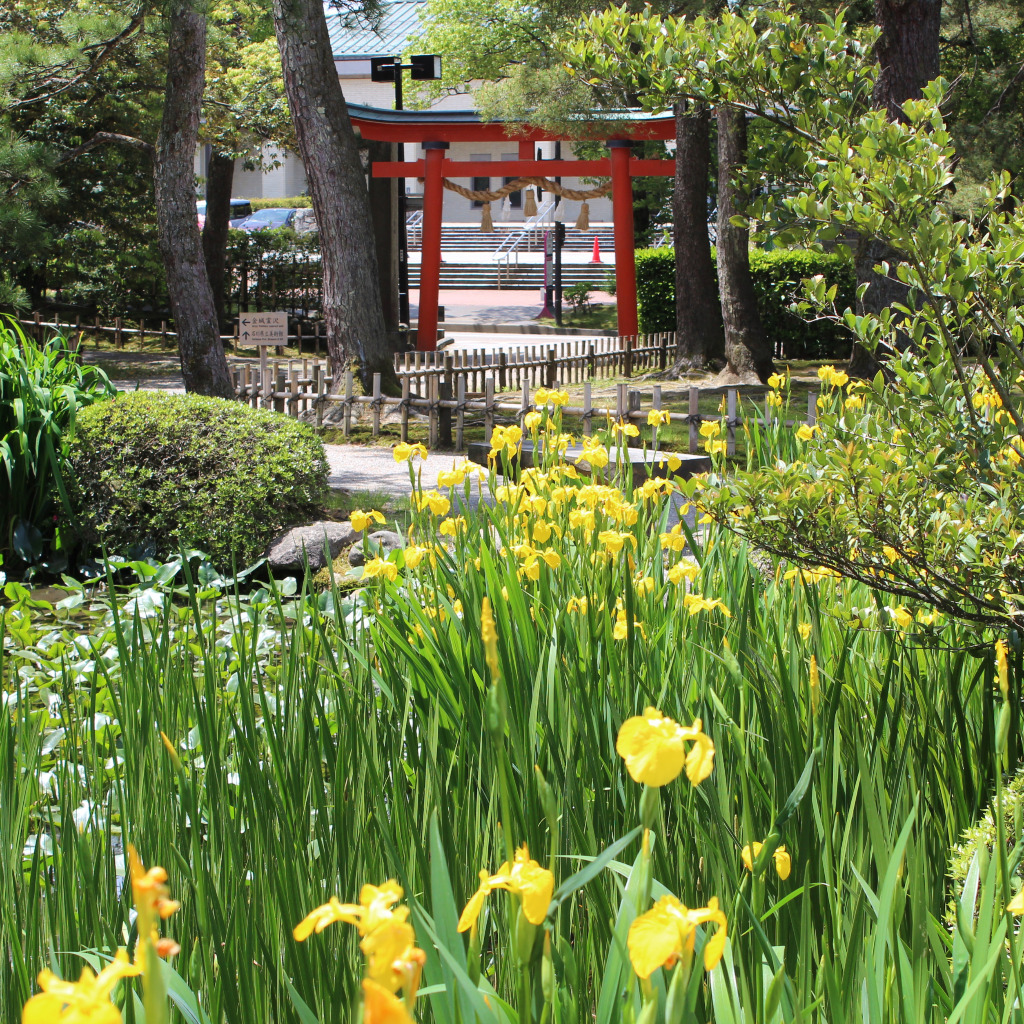 The Well from Which Kanazawa Draws its Name

Turn south as you enter this gate and the path takes you to a gated well with a dragon painted on the underside of the roof. This is Kinjō Reitaku (“Spiritual Well* of the Gold Castle” ), the holy well, whose first and last characters match those that make the name, Kanazawa. But what makes this well so special? 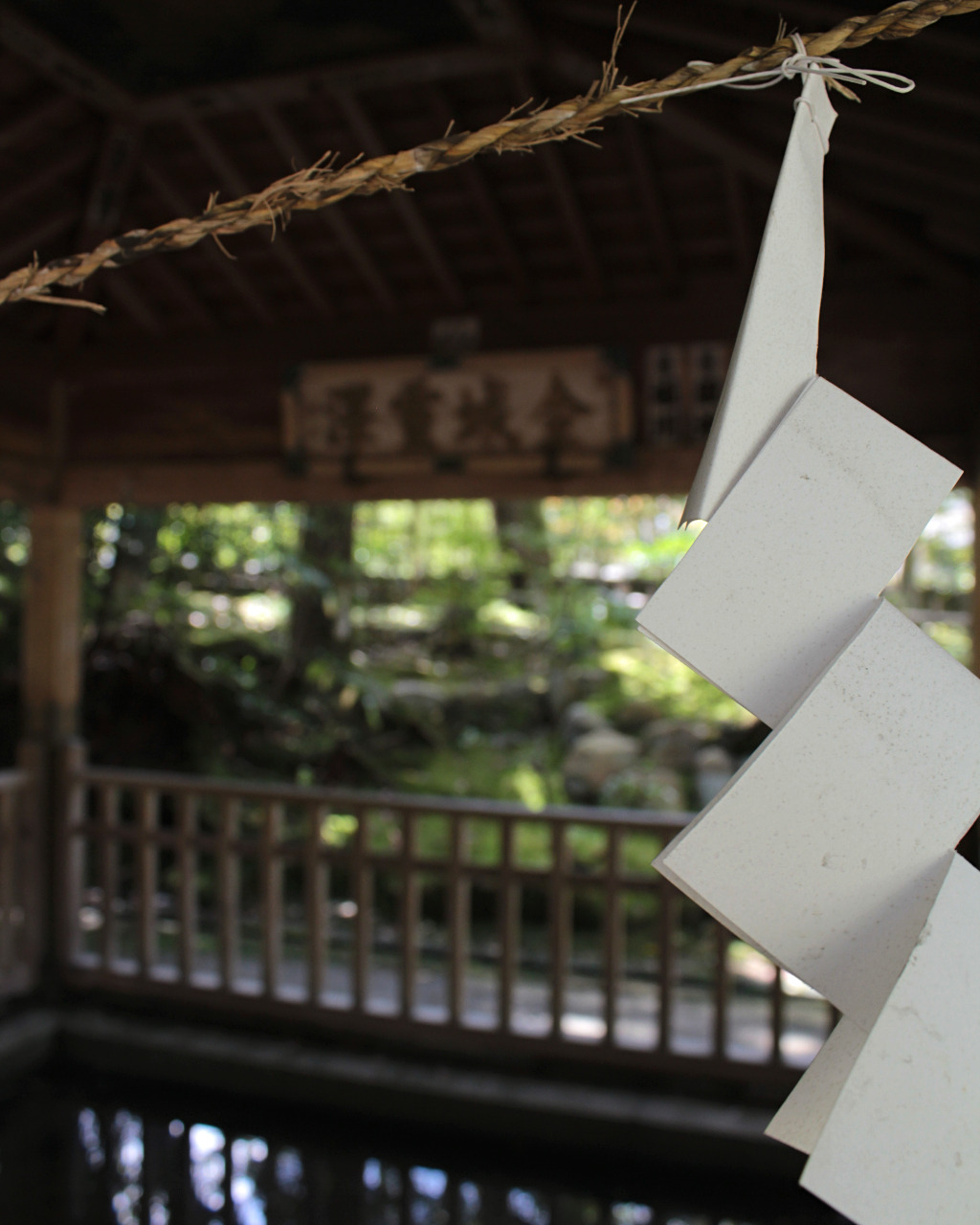 Story Time: The Local Legend of the Potato Farmer, Togoro

Imohori Togoro, whose name means “Togoro, the potato farmer,” lived in a simple house in the Kaga region. He made his living digging up wild potatoes from the mountainside, washing them in a wild spring, and selling them to local villagers. 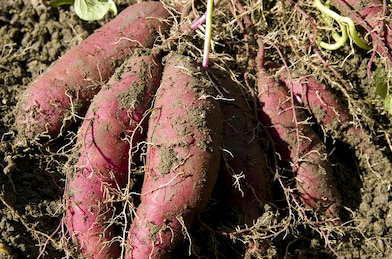 Far off in Kyoto, the god Kannon visited a wealthy merchant in a dream. “Marry your daughter Kazuko to Imohori Togoro of the Kaga region,” Kannon commanded him. The merchant did so. Initially, Kazuko worried for the loss of her status and comfortable living, but Togoro assured her, “the Kaga region has plenty of riches to share.”

One day, a flock of birds feasted on their field of rice. Togoro grabbed their last bag of gold and threw the pieces at the birds to chase them off. Kazuko panicked, having just seen her husband literally throw their wealth away. But Togoro said, “If that shiny metal matters so much to you, you should come with me to clean my harvest of potatoes.” 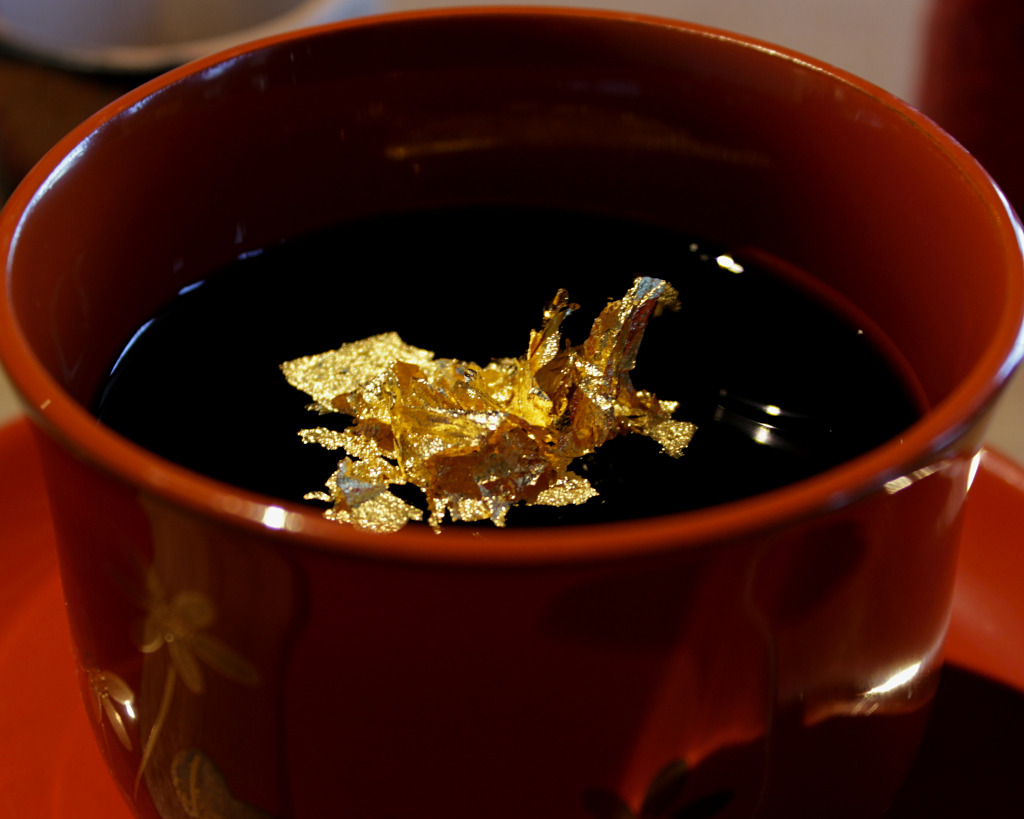 Gold leaf on coffee jelly, served at Kanazawa-ya Cohi-ten Cafe near Kanazawa Castle Park
She did so, and as her husband washed that day’s lot in his usual spring, flecks of gold rose up in the swirling water. Kazuko was shocked, but Togoro shrugged. “Take as much as you wish,” he said. Smiling, he added “I told you, the Kaga has plenty of riches to share.”

The couple lived out the rest of their days in wealth, and the land around them became known as “The Marsh* of Gold,” which in Japanese is Kanazawa.

* A note on translation:

The second character of the modern writing of Kanazawa (金沢) is often translated as “swamp” or “marsh”. While it does refer to waters from the earth, other characters more closely match these English terms.

The particular character used for Kanazawa as it was originally written, 金澤, can mean “pool” or “luster,” making one possible translation of Kanazawa, “gold brilliance”

The original location of Togoro’s spring is unknown. But the well at Kanazawa shrine was established in its honor and remains under the spiritual protection of the shrine. It’s used even today for special occasions, like the commencement ceremony of the massive Hyakumangoku Festival.

The well remains ever-full of water, so—sorry Inu Yasha fans—there’s no chance of time traveling through this one. 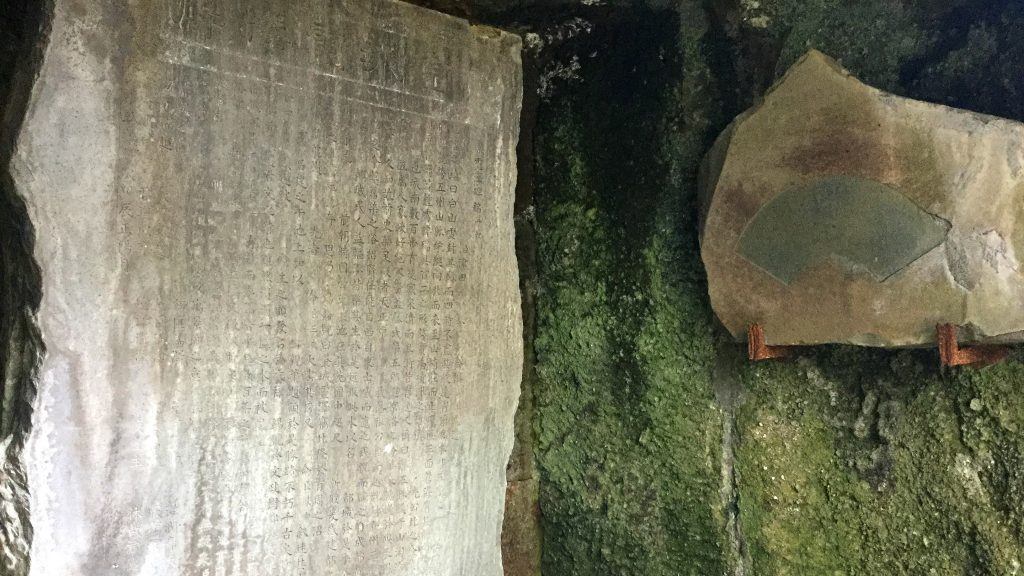 The cave nearby recounts the tale of Togoro Imohori on stone tablets.

Perhaps less appealing is the large stone near the shrine’s main gate, the Ibotori Ishi. It was once believed to remove warts, though the afflicted had to rub their wart on the stone unseen to achieve the affect. 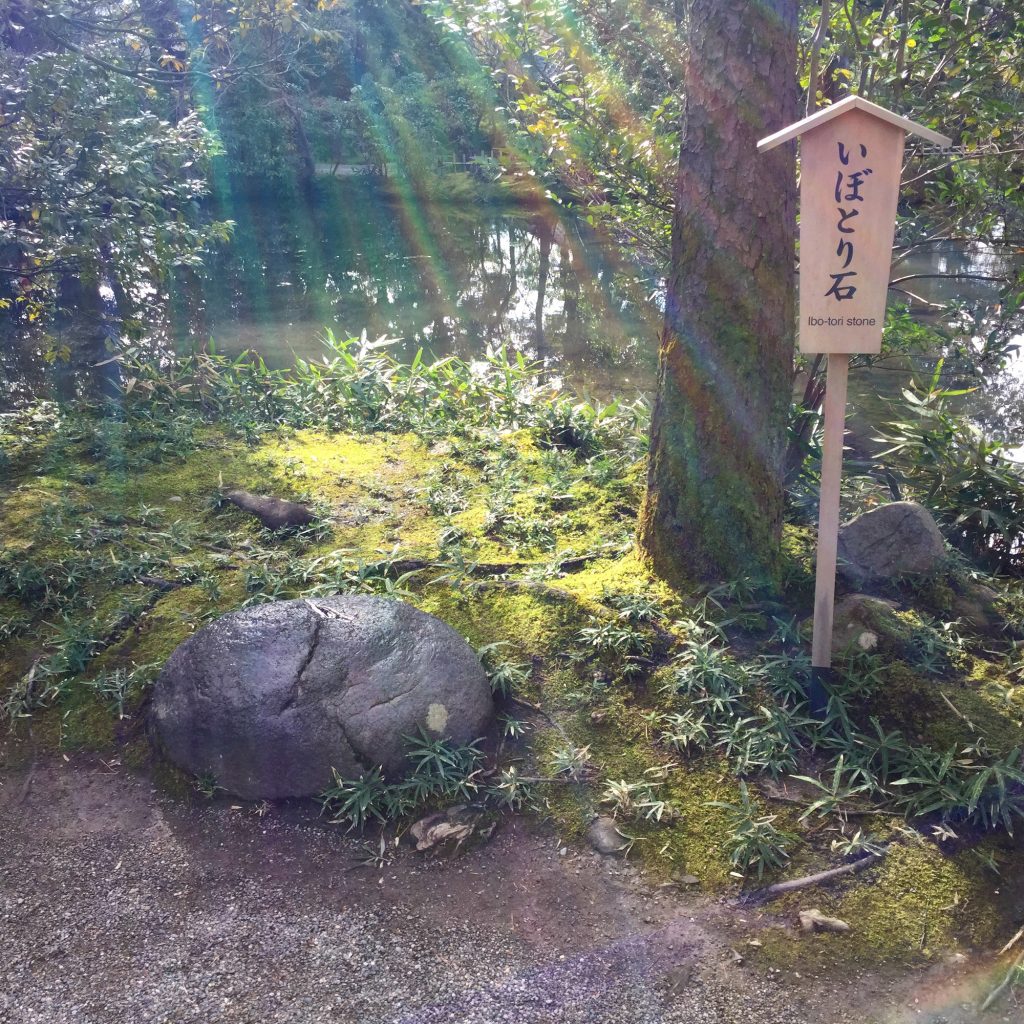 We strongly recommend enjoying this artifact by sight alone. 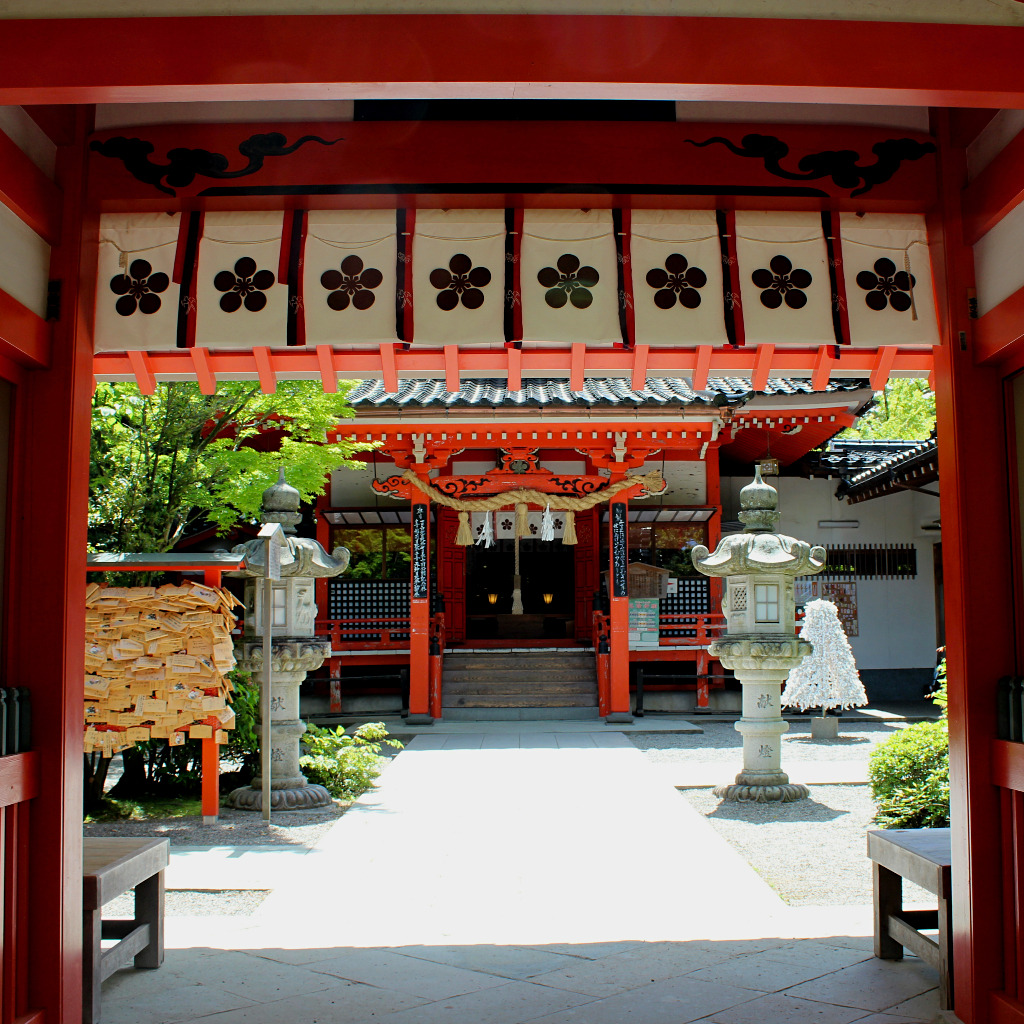 The shrine itself is small but brilliantly colored in a traditional red-orange vermilion and black. It originally honored the Sugawara family, the parent clan of the Maedas who ruled Kanazawa during the Edo era. Only ladies of the castle could to enter during certain times of the year before the shrine was eventually opened to the public. 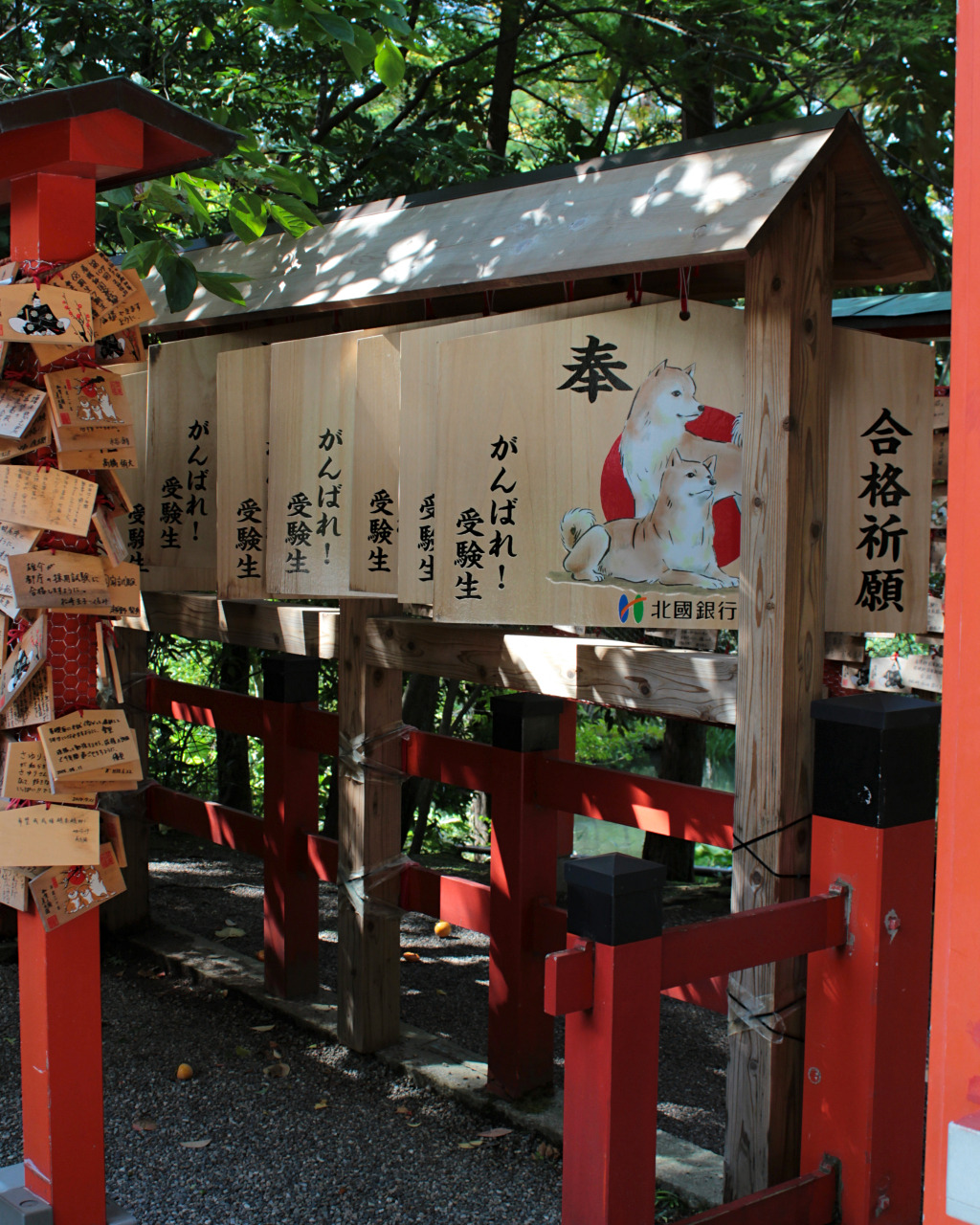 Within, gods of natural disaster relief, prosperous business, and safe travel reside. Additionally, a scholar and member of the Sugawara Clan is deified there as Tenjin. Because of his presence, Kanazawa Shrine is a frequent stop for students praying for success in academia. 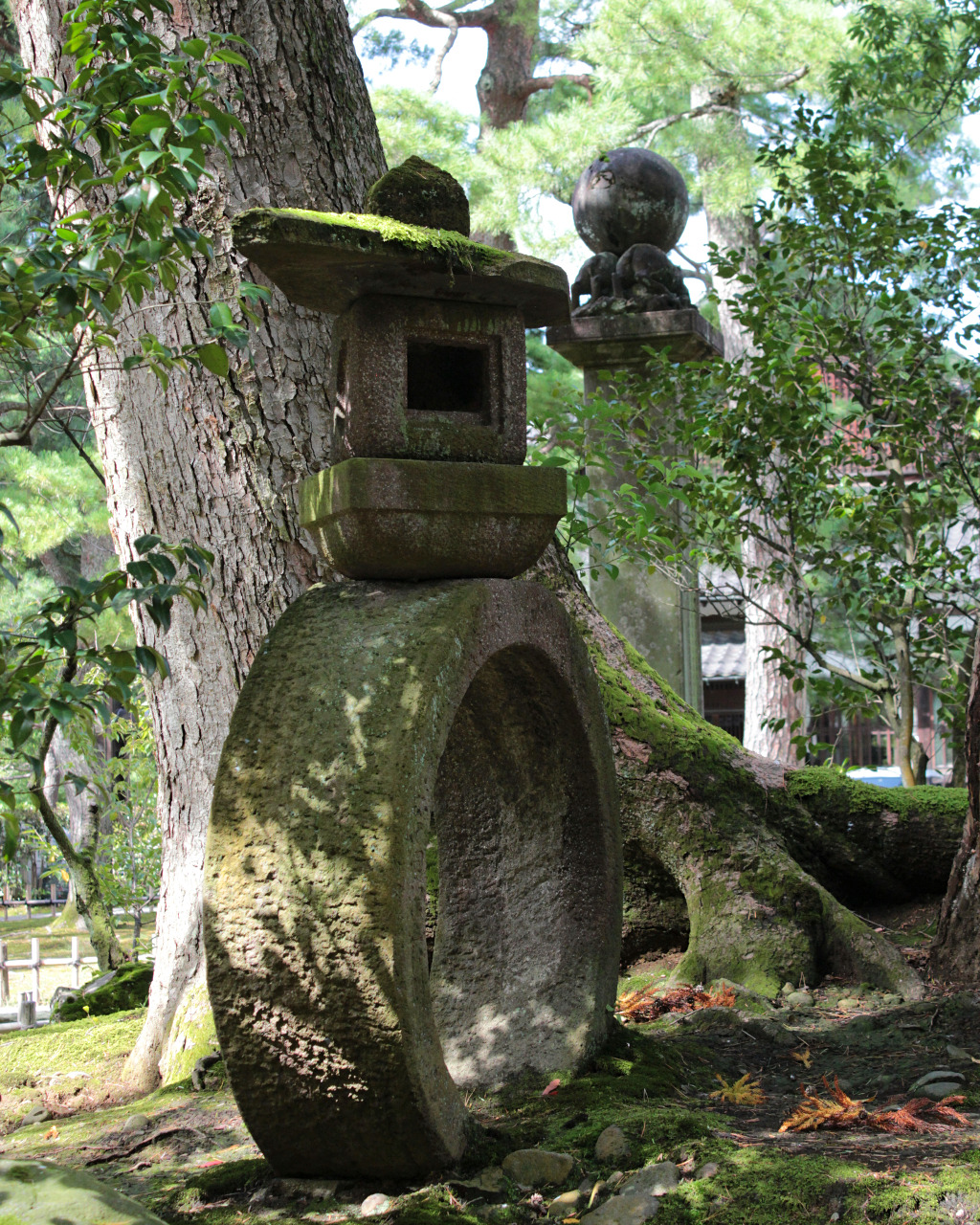 Along the grounds are several unusually designed lanterns, dragons and other statues. A phoenix oversees all visitors from its perch on the roof. Eight vermilion torii gates lead down to the sacred well. 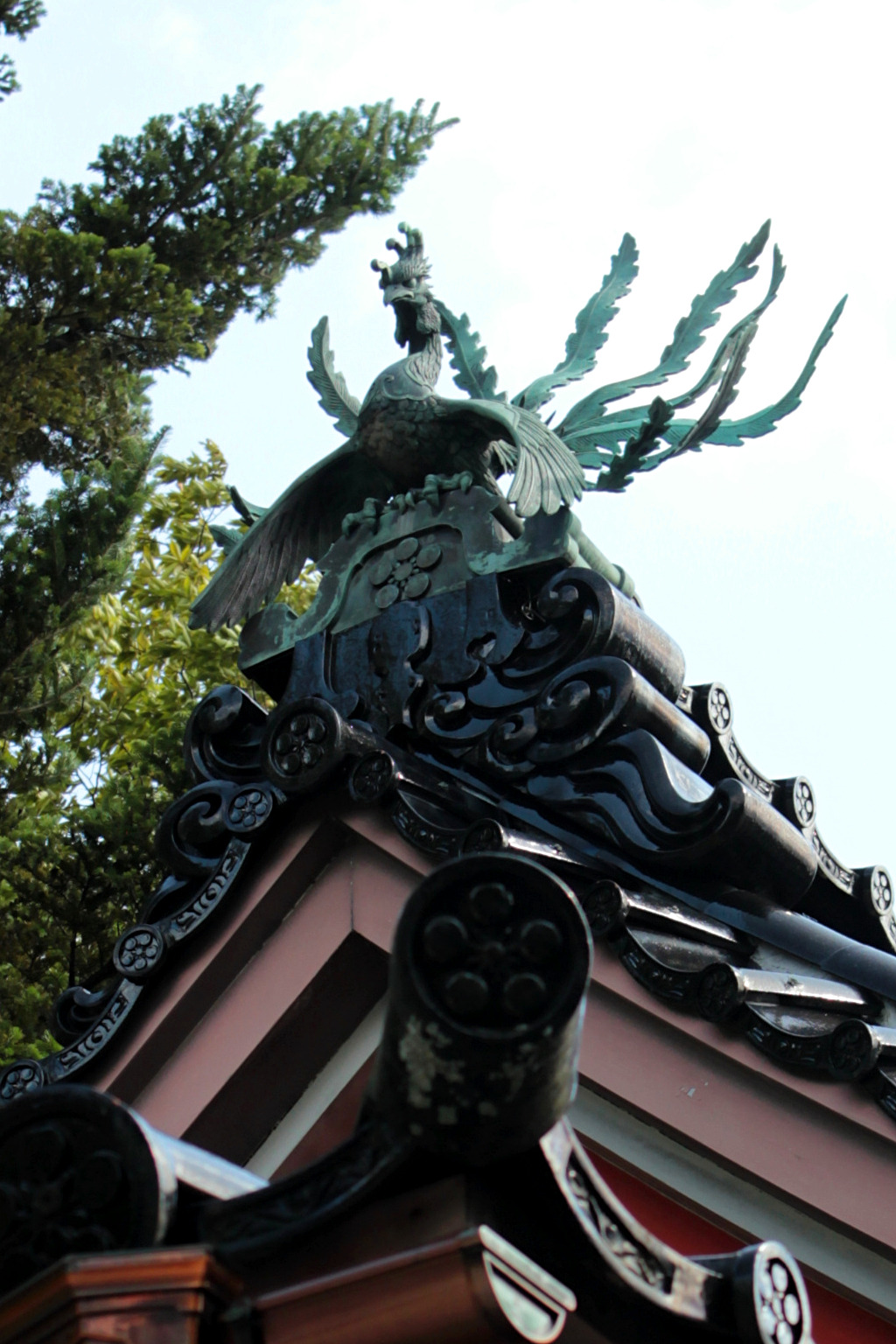 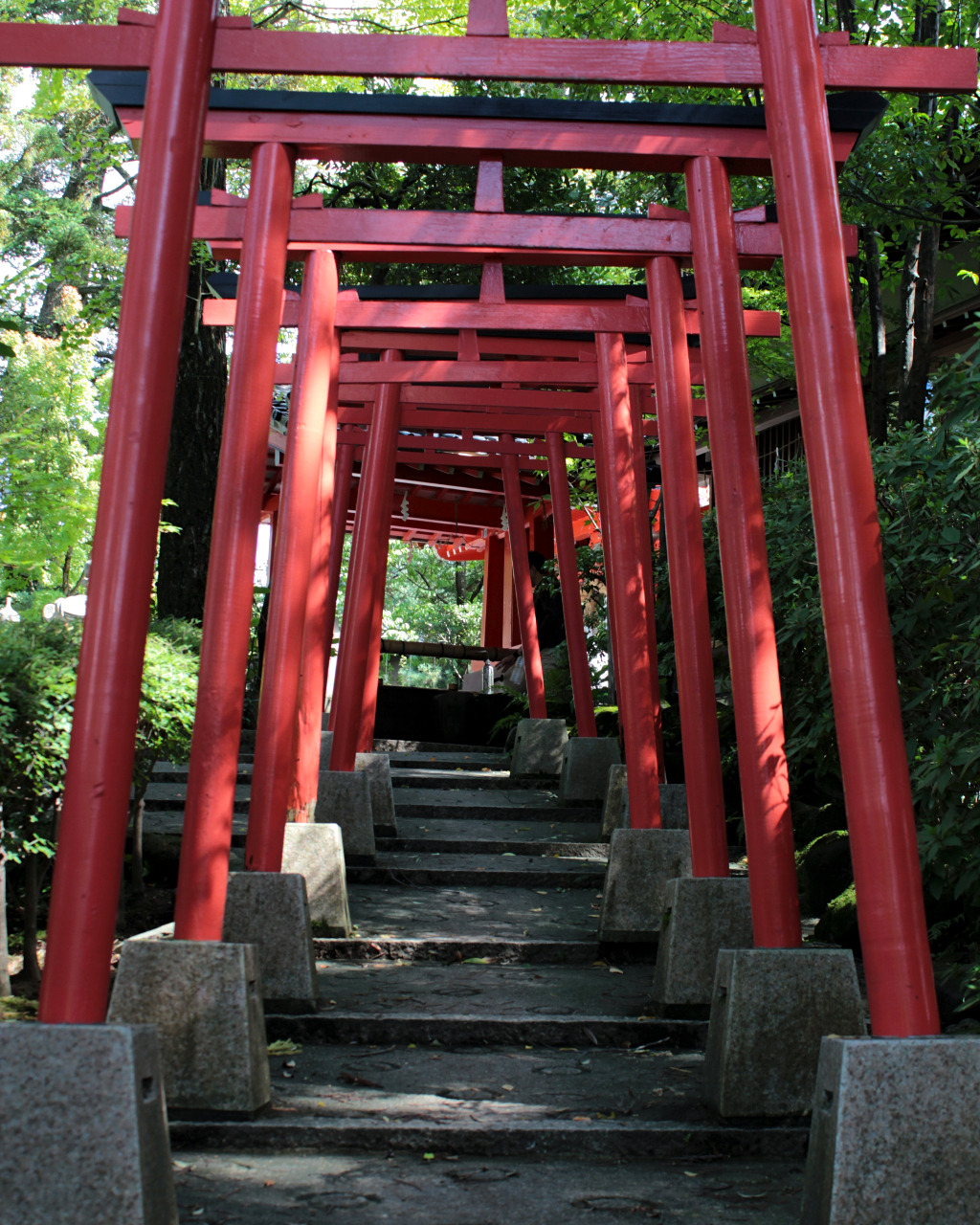 Kanazawa Shrine is one of the few shrines that offer New Year’s paper fortunes in English. 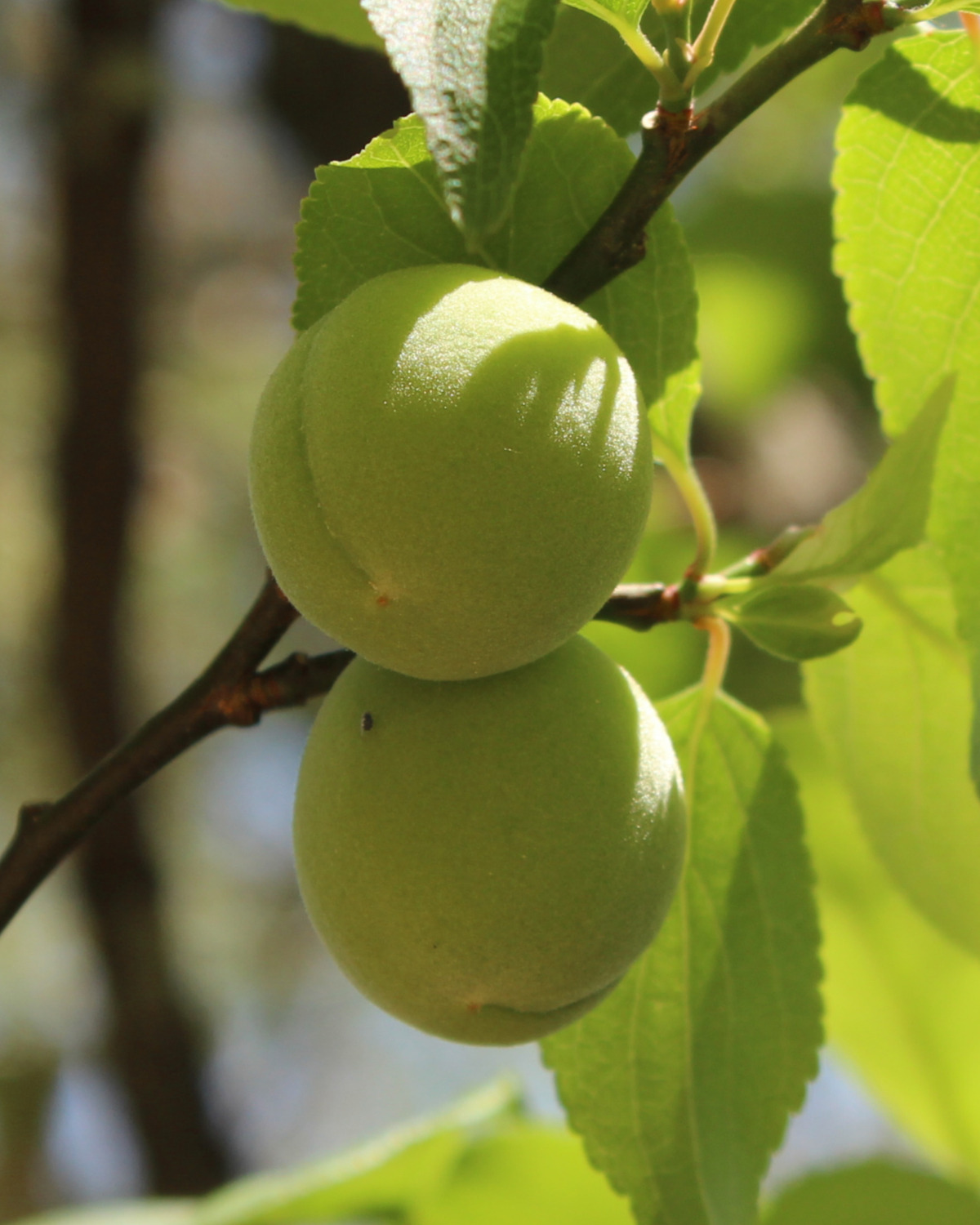 Young Chinese plums (apricots) begin to fruit alongside the shrine in early summer. 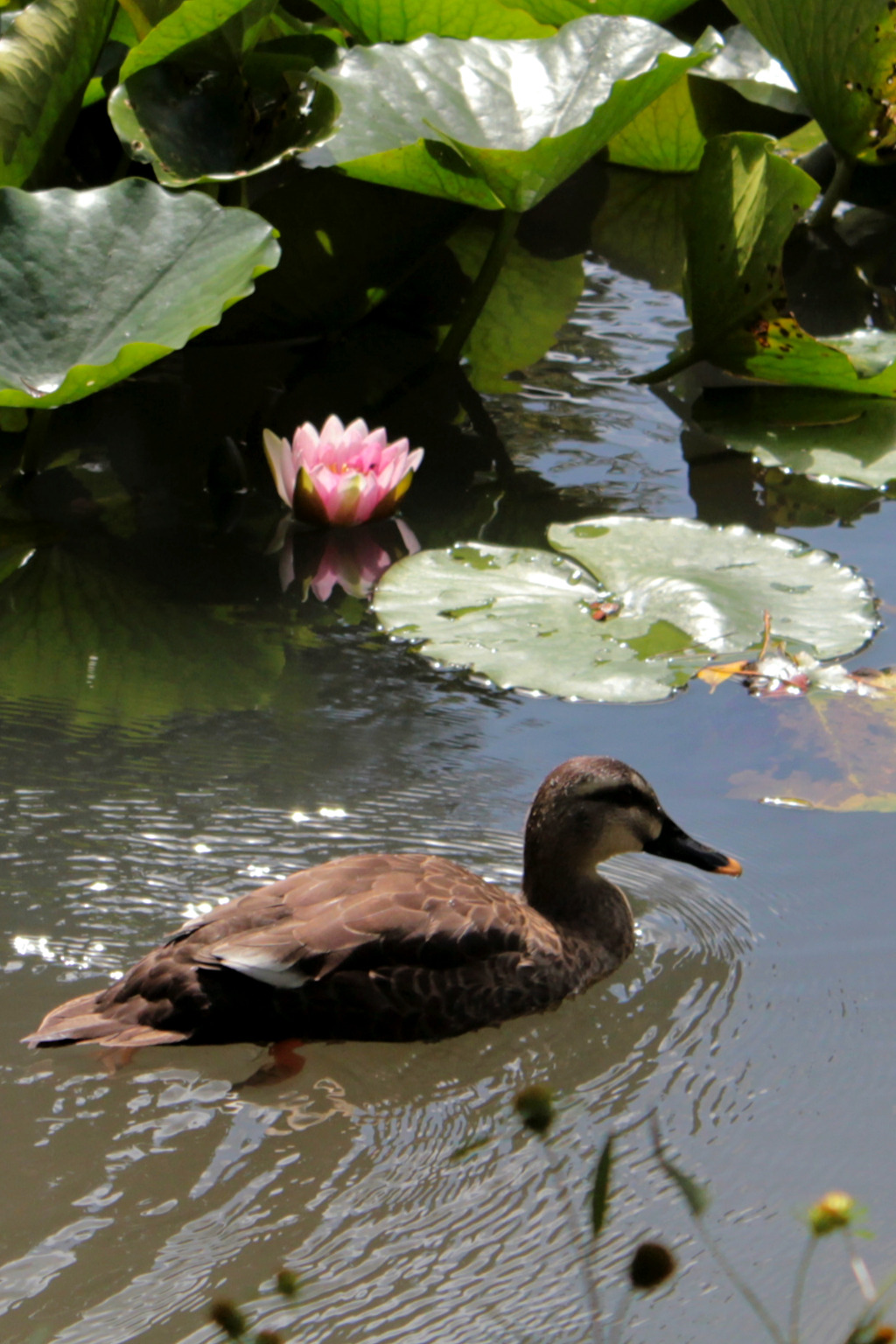 Spot-billed ducks and other birds occupy the garden and forested areas around Kanazawa Shrine.