How to Enjoy Kenrokuen Anytime of the Year

Almost every article, blog post and tourist brochure of Kanazawa’s most famous garden features the garden’s colorful seasonal “highs.” But it’s the subtle “off-season” beauty that ranks Kenrokuen among the Three Great Gardens of Japan.

Grab a garden map with your ticket and follow this route anytime of the year.

What Almost Everyone Misses… 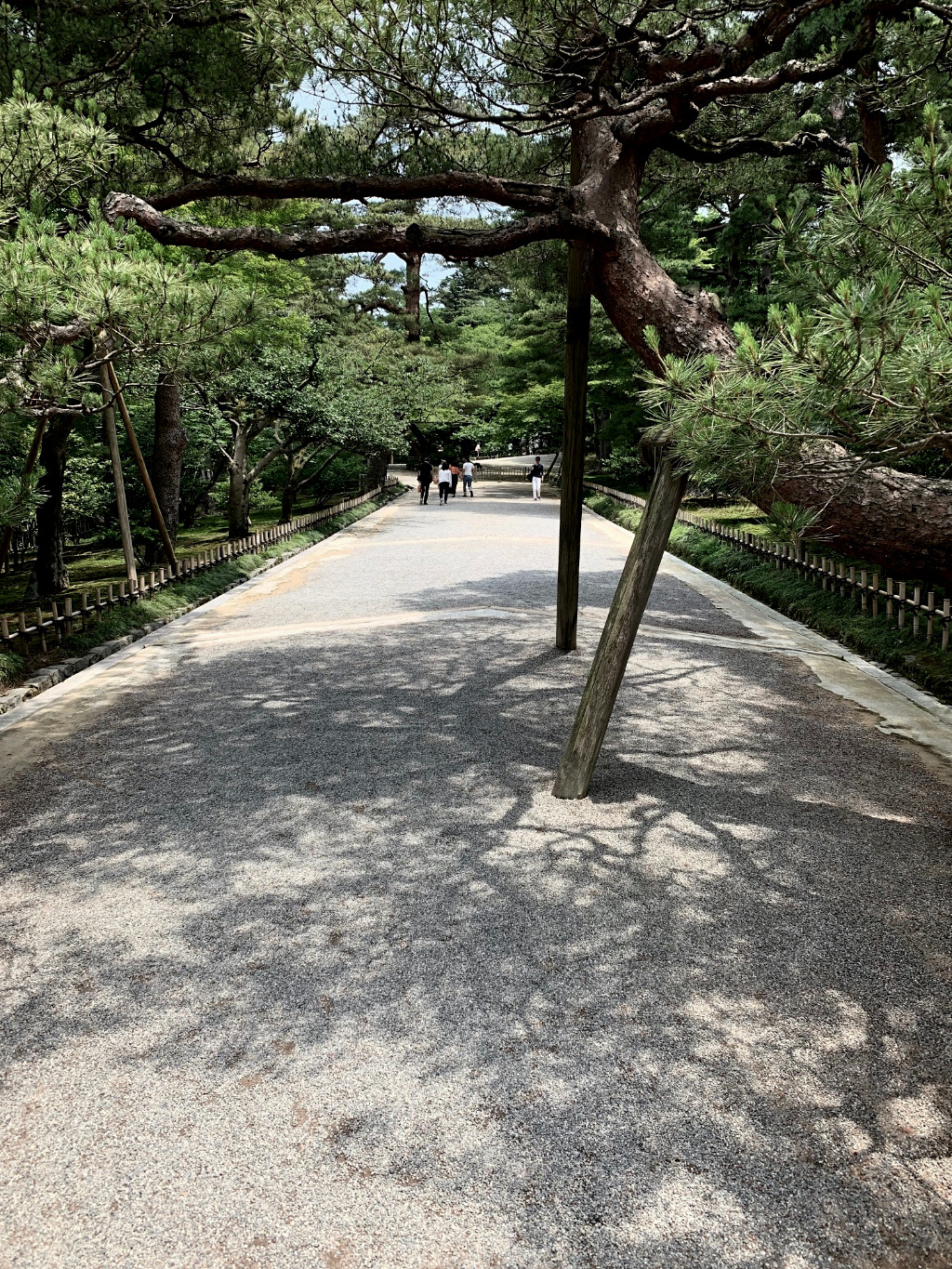 Avoid the worst of Kenrokuen’s high traffic by taking any other entrance than the one facing the castle! Mayumi Rise is especially close, directly diagonal of the 21st Century Museum.

The garden’s position on a hill isn’t simply a result of natural geography! The slopes that rise up to the garden proper are actually part of its design. The path ahead blocks visitors’ views, hiding the garden from their view. However, this builds anticipation for what’s to come and what’s yet to be seen. 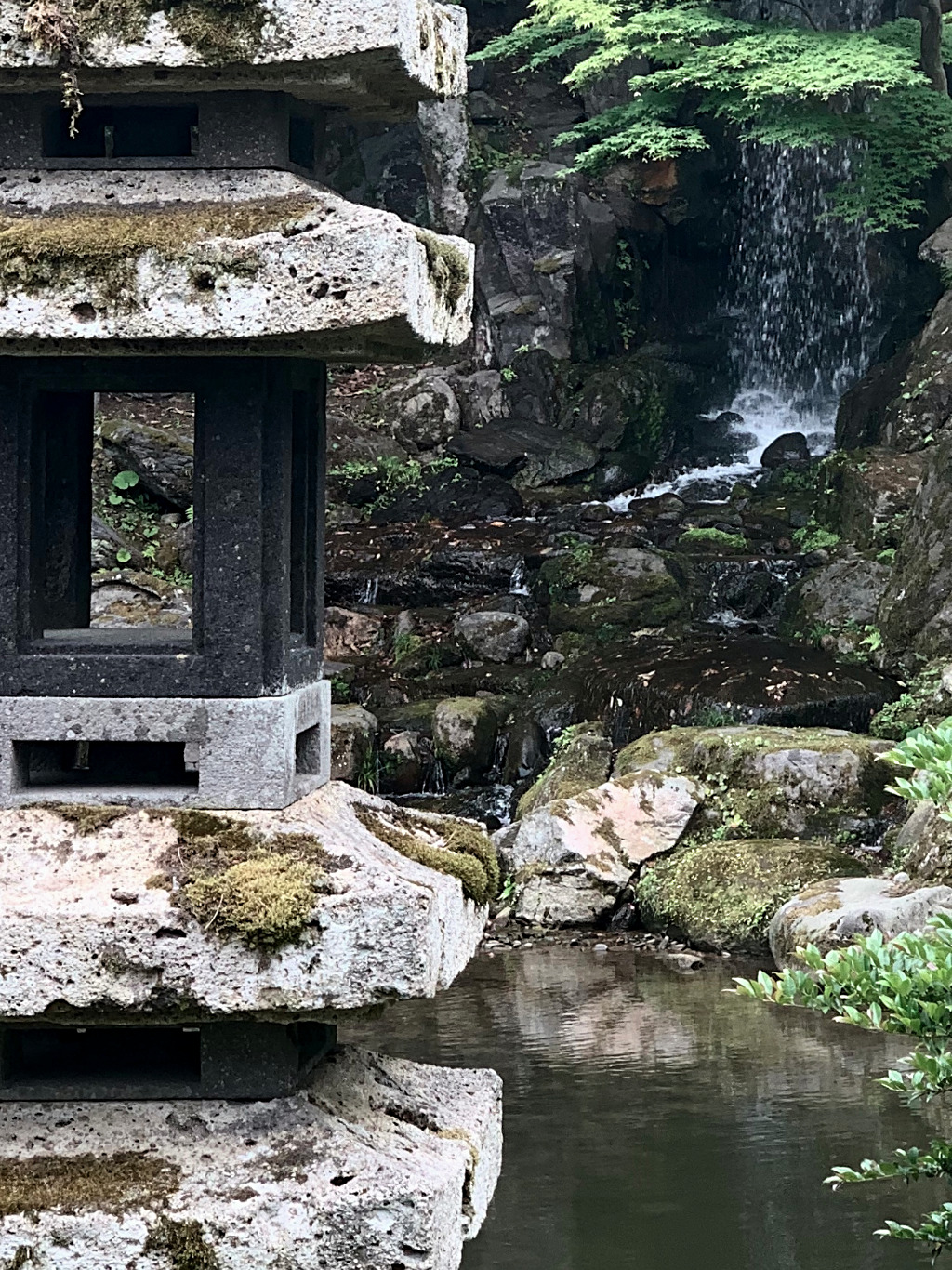 Once called “The Lotus Pond Garden,” this pond and the surrounding area were the beginnings of what has become Kenrokuen Garden Park today. The pond itself is often remarked for its gourd-like shape.

The uniquely shaped stone pagoda is believed to be a gift from Toyotomi Hideyoshi to Kanazawa’s local lord, Toshiie Maeda.

The moderately sized Midori Waterfall is a rarity among Japanese gardens, making it one of the more appealing aspects for Japanese visitors. The branches of a maple hang deliberately in front of the waterfall, adding depth and character to the view. 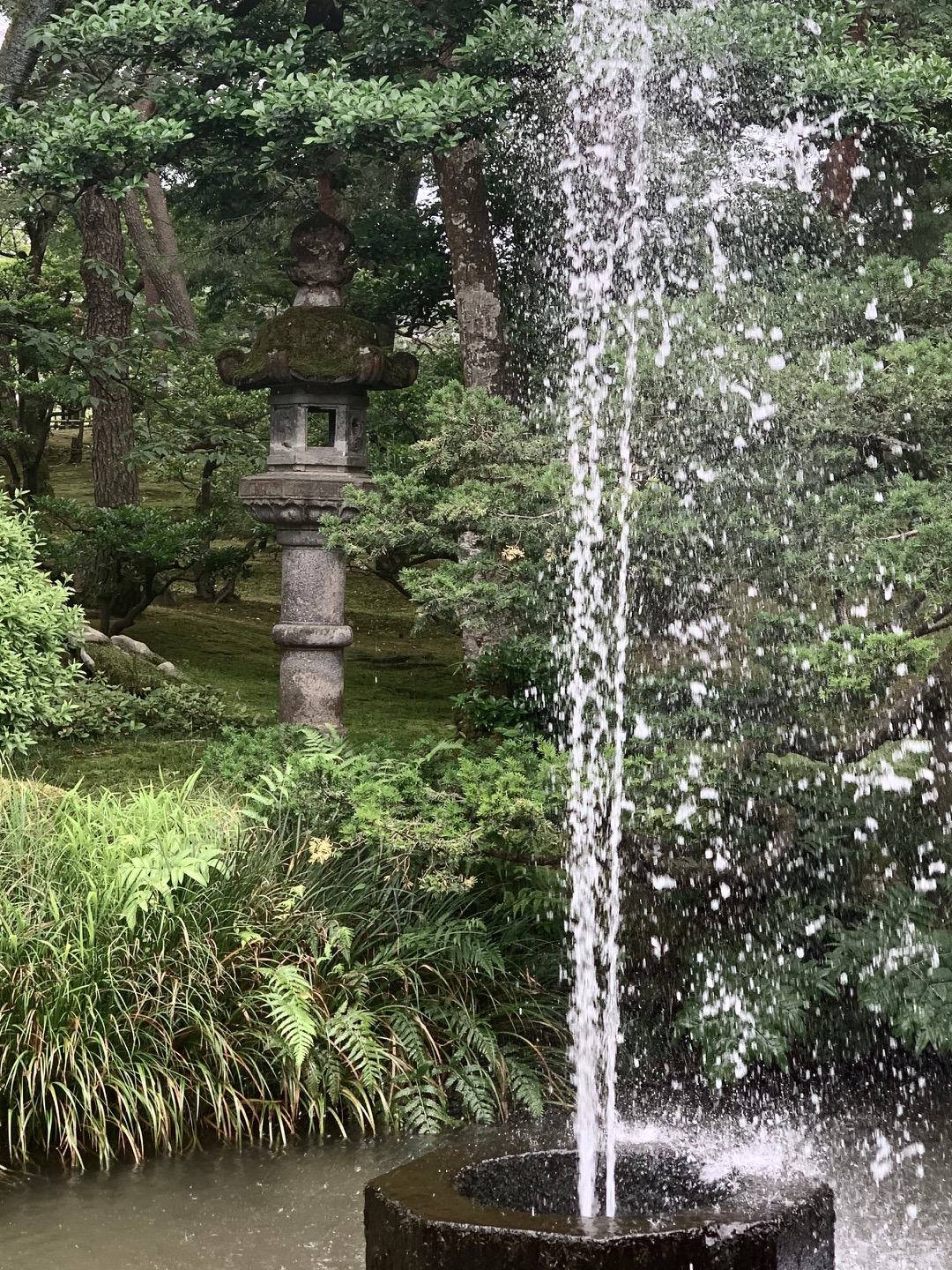 This fountain has no special name, being the very first in Japan. It runs entirely on the pressure created by the higher level of the nearby Sai River. The fountain’s location is directly across from the garden’s birthplace, where it began as a significantly smaller private garden for the local ruling lords. 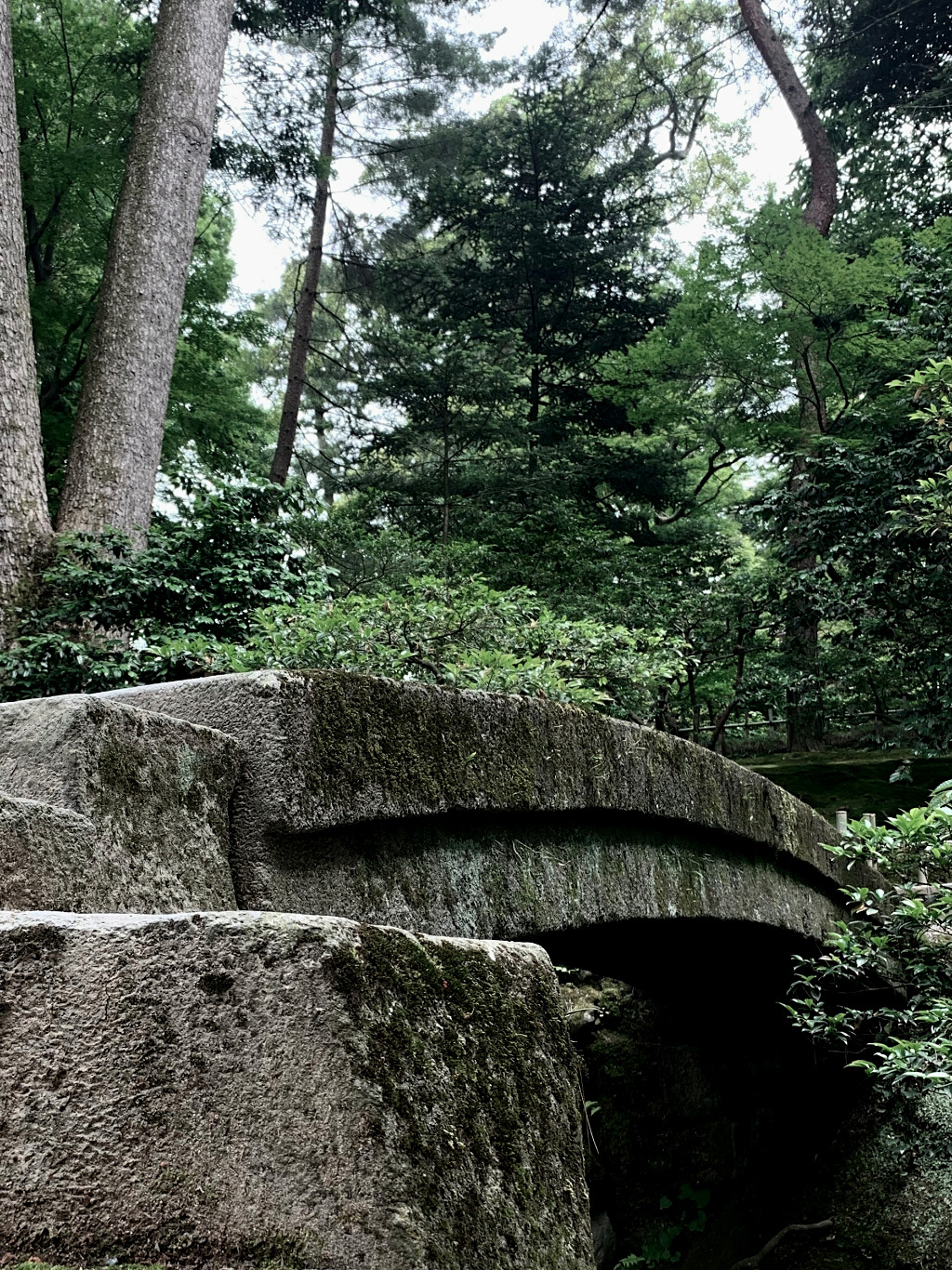 Take this bridge to the west, but before crossing, also take a look. The design of this single slab of stone looks like two, one larger slab stacked on one smaller. This gives the illusion of an even smaller bridge, making it appear more delicate and appropriate to the garden surroundings.

The garden shares one other bridge like this one near the Kotoji-toro Lantern, further along our path. 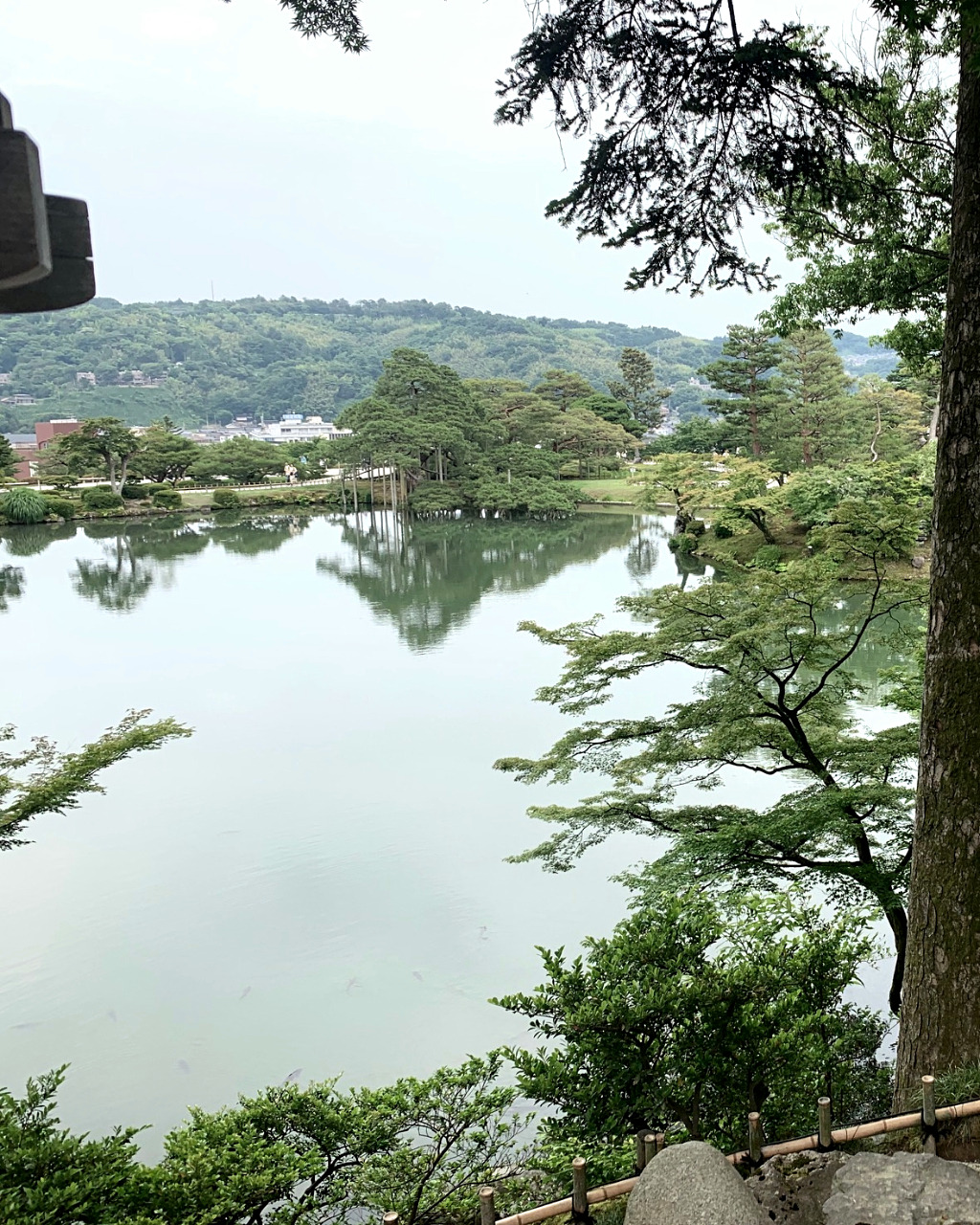 Spiral up the stairs of the tiny but tall hill called Sazaeyama. At the top is an enclosed stone shrine and wooden parasol, as well as a lovely view of the Kasumi-ga-ike Pond below. Coming back down on the south side, the koi fish gather near the water’s edge. You can often spot turtles and waterfowl here as well. 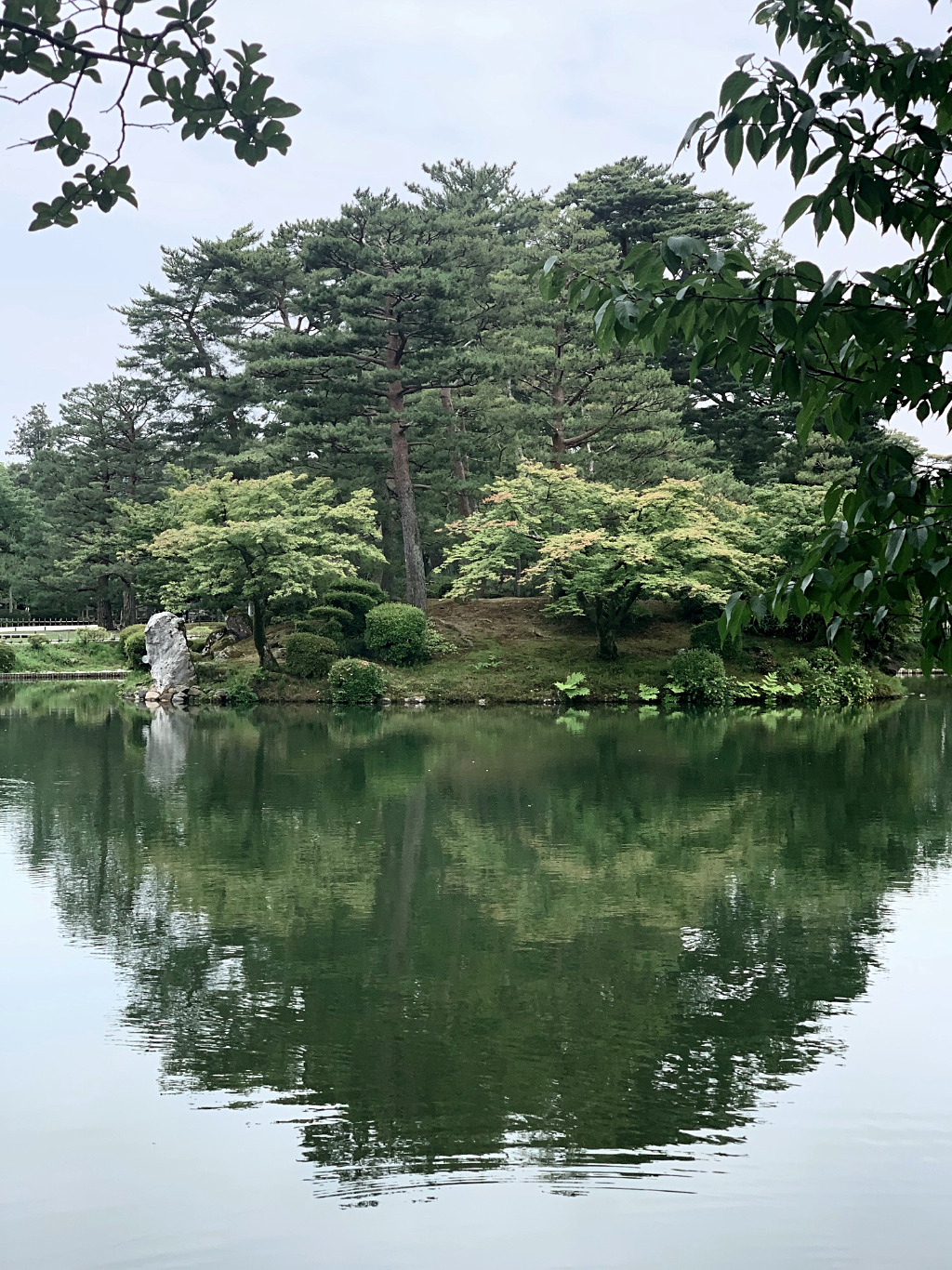 This spot is not on the garden map, but can be easily found walking along Kasumi-ga-ike’s east side. The bench below the Japanese maple affords a view of Horai-jima. This island in the middle of the pond is often called “Turtle Island” for its round shape. The giant rock on the south side is its head, and the small pagoda on the north, its tail. 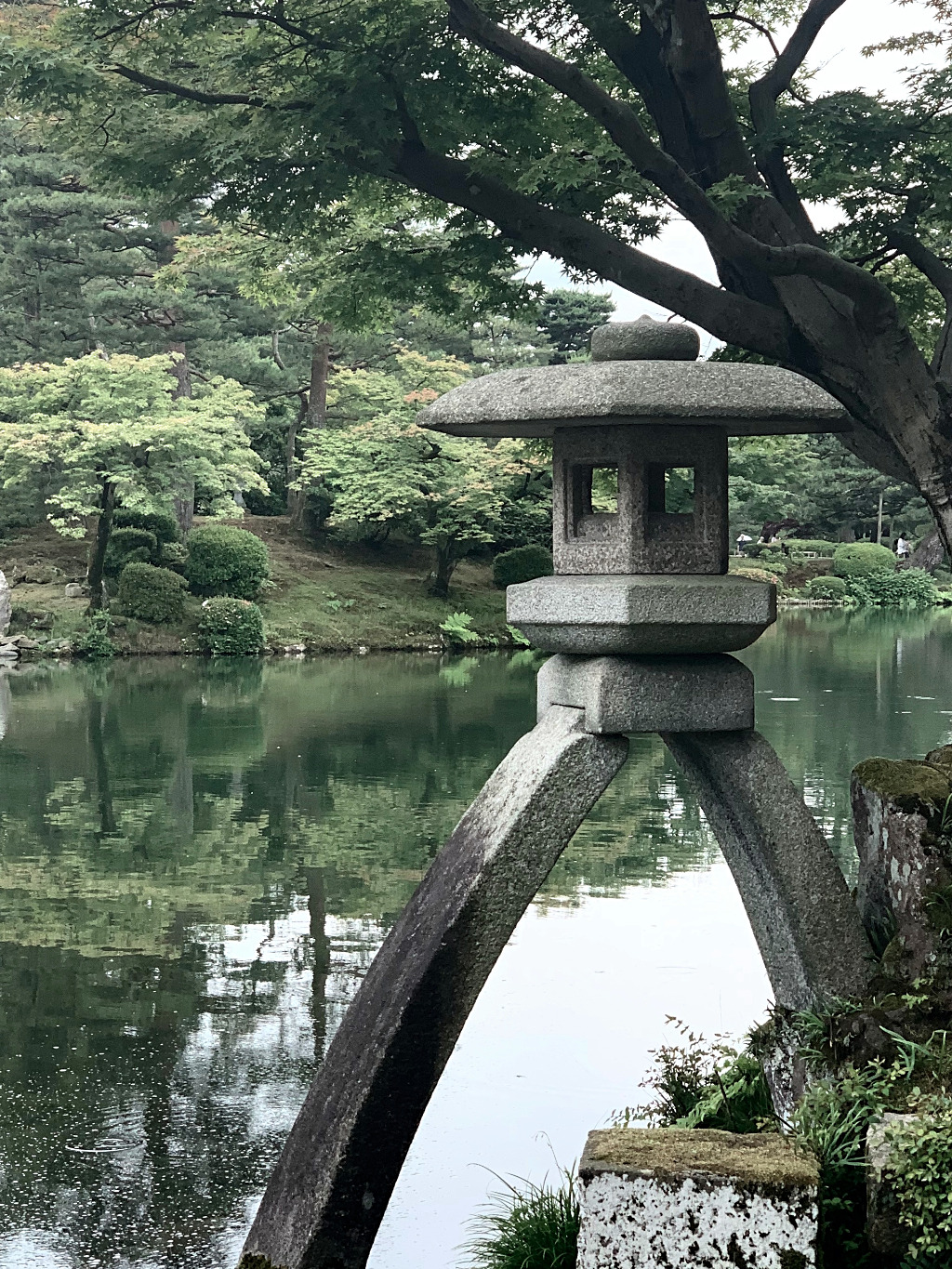 This iconic stone lantern is the symbol of Kenrokuen Garden Park and is also often a symbol of Kanazawa. It’s remarkable for it’s distinct shape, especially its uneven legs.

Have you ever seen a koto, or “Japanese harp”? Its strings are held up tightly on specially shaped bridges. It’s these bridges that the Kotoji-toro Lantern is named after, as its legs are shaped the same way. When one of its legs broke, it was left unrepaired in a state of “imperfect beauty.” 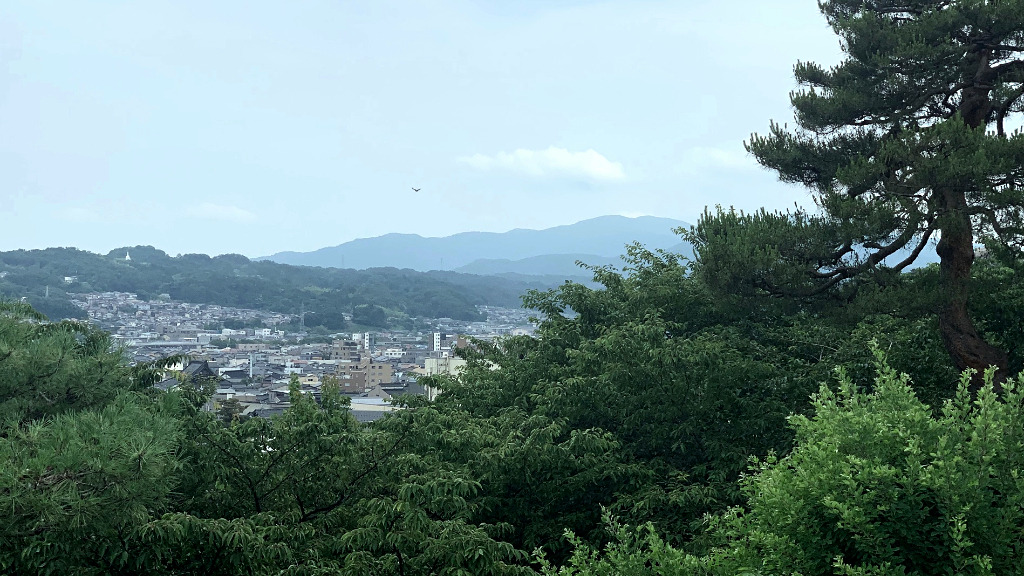 Over the southern side of Kenrokuen is a wide view of the city and sprawling green mountains. In the distance, a brilliantly white Buddhist stupa can be seen against the green mountain side along the Utatsu Mountain Range. This is one of only ten throughout Japan that were donated by India’s first prime minister in the mid-20th Century.

ON THE MAP
Panoramic Viewpoint（眺望台） 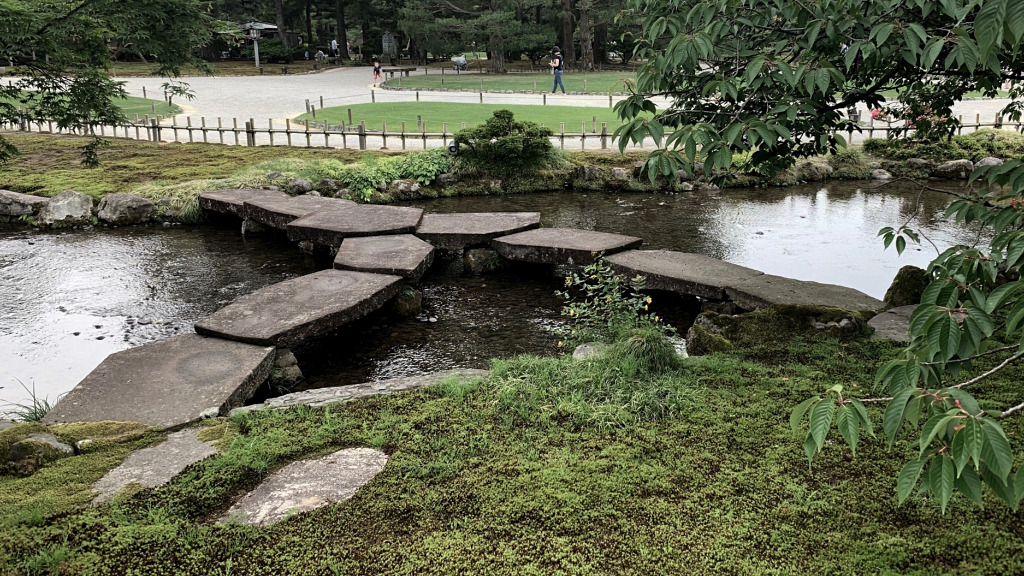 These carefully placed stones make a split bridge in the shape of a flying flock of geese. The bridge is also often remarked for looking like the character 入, meaning “to enter,” giving a feeling of invitation to this area of the garden. It’s also sometimes called the “turtle bridge” for the shell-like shapes of the individual stones. 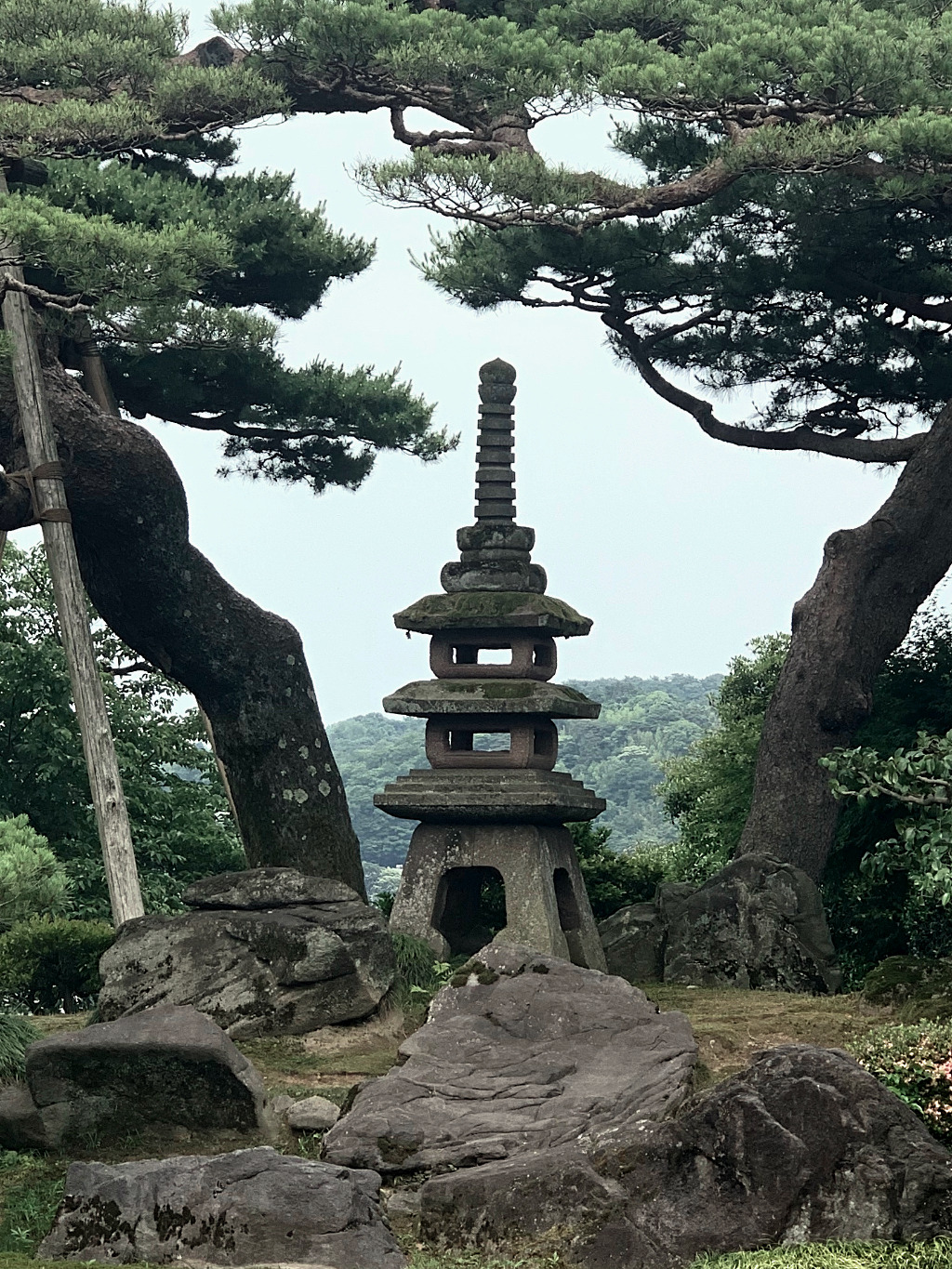 This area was once a separate, private garden of the Takezawa Palace, the royal guest house for dignitaries and aristocrats visiting Kanazawa Castle. The palace was reconstructed as a portion of the nearby Seisonkaku Villa, and the garden here remains as part of the larger Kenrokuen Garden Park.

ON THE MAP
Seven Fortune Gods（七福神山） 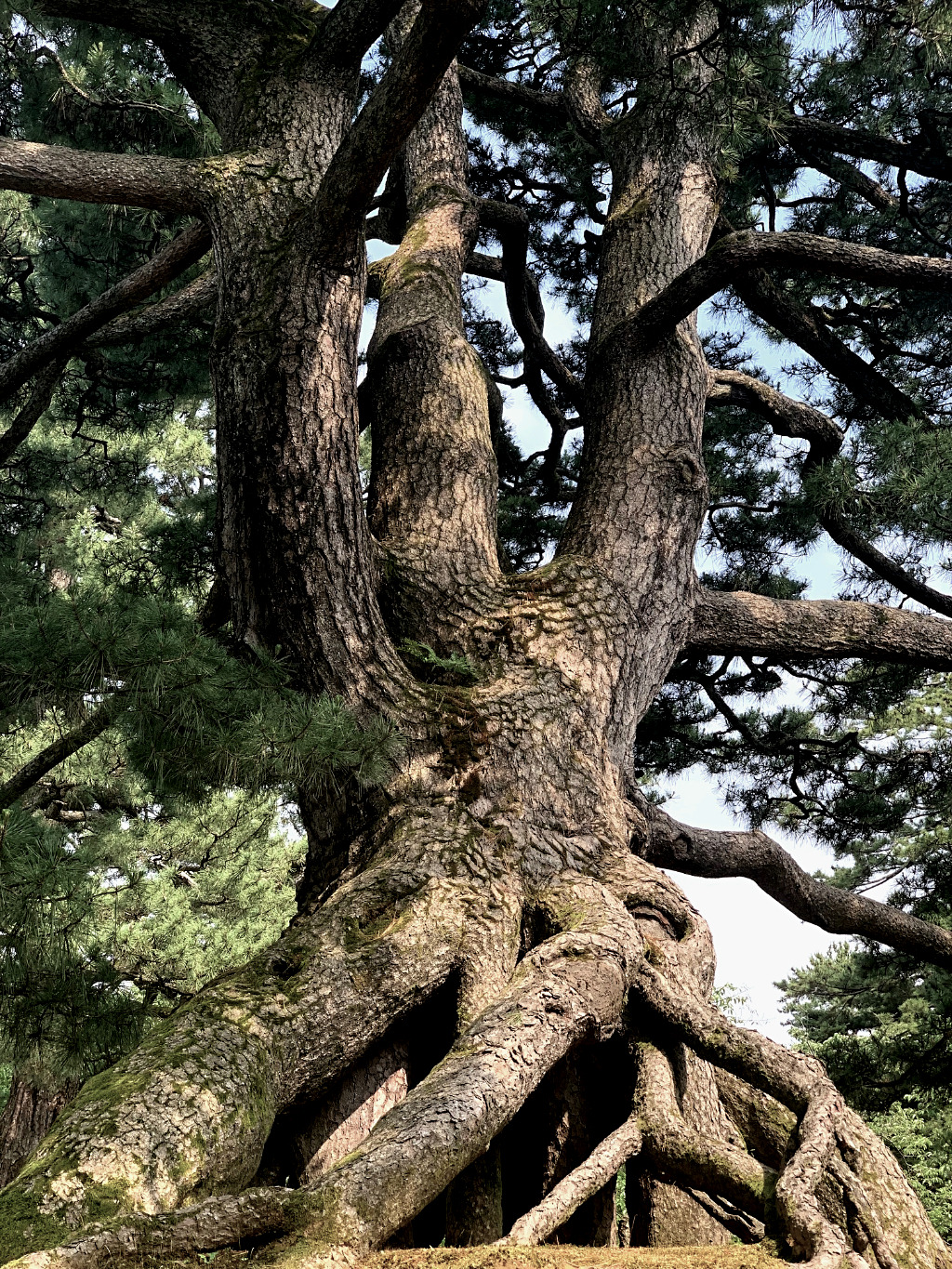 This large pine tree’s full name, Neagari-no-matsu, means “raised roots pine,” for obvious reasons. The tree was planted on a high mount of soil. Once grown, much of the soil was removed from the upper areas of the roots, exposing them to the air and allowing them to develop bark. The result looks like the legs of an octopus, suspending the trunk of the tree above the ground. 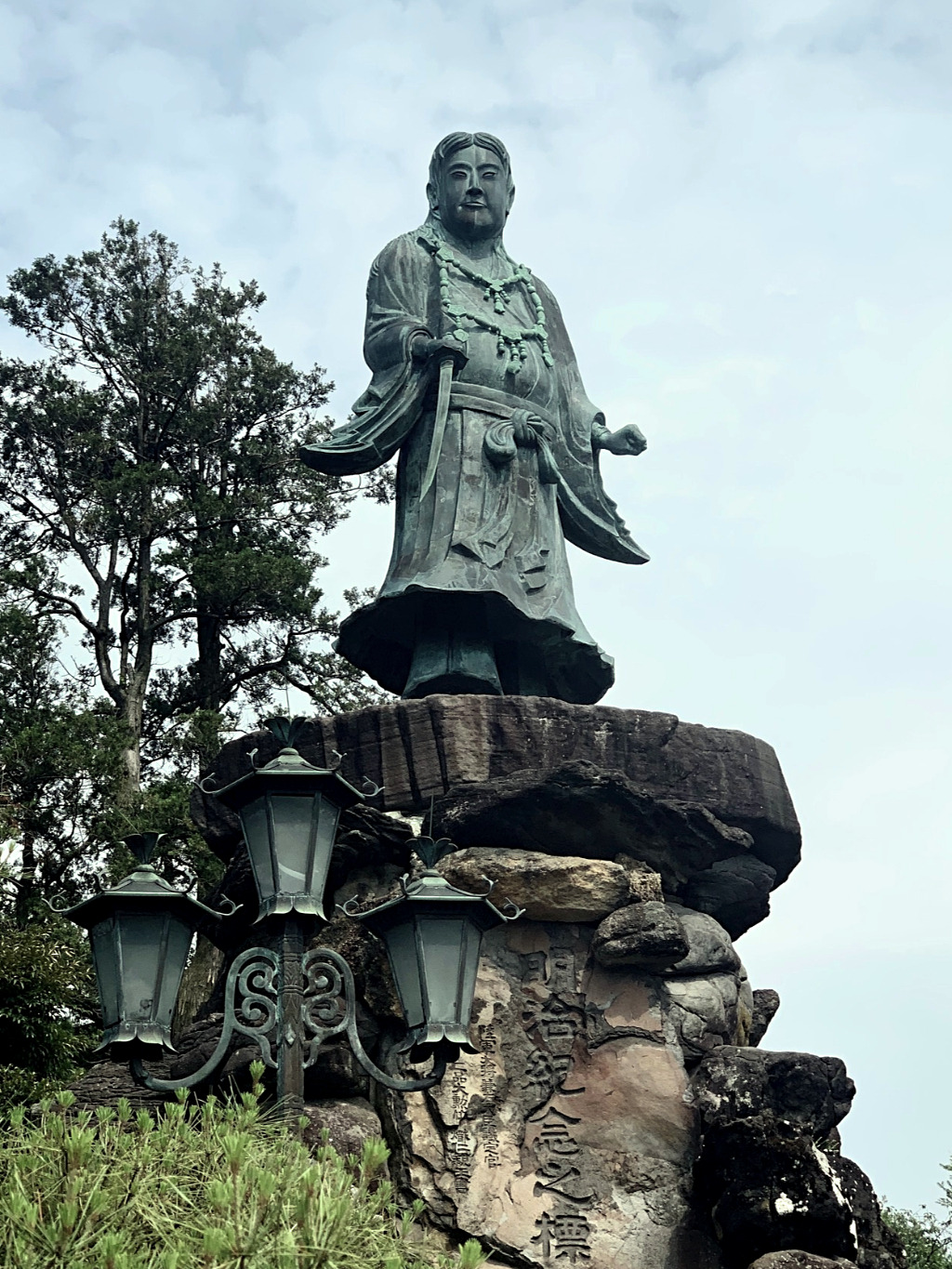 The patina statue is the figure of Yamato Takeru no Mikoto, a legendary figure of Japanese mythology on par with King Arthur. The figure honors the lives lost during the Satsuma Rebellion (depicted in the Tom Cruise movie, The Last Samurai).

However, it shares some level of fame today as the subject of an Ig Nobel Prize in Chemistry. Kanazawa University Professor Yukio Hirose discovered that a particular metal in the statue prevents birds from defiling it. 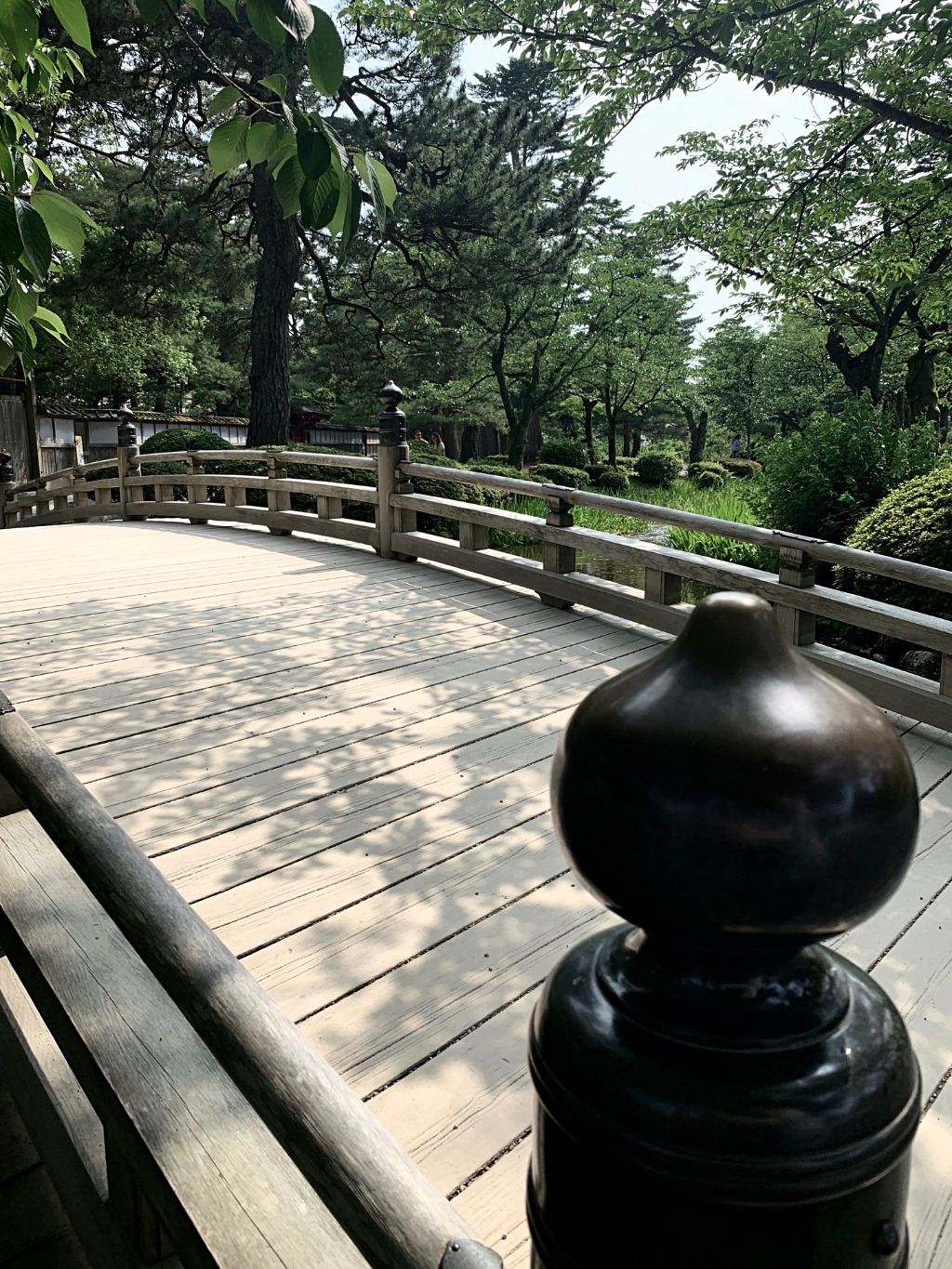 The ancient wooden “flower-viewing bridge” is one of the most photographed areas of the garden, as is no surprise. In spring, cherry trees frame the gentle slope of light wood, and in summer, the meandering creek bears iris leaves and purple flowers along its banks.

Almost anytime of the year, the water is bordered by verdant grass and inhabited by various water fowl. 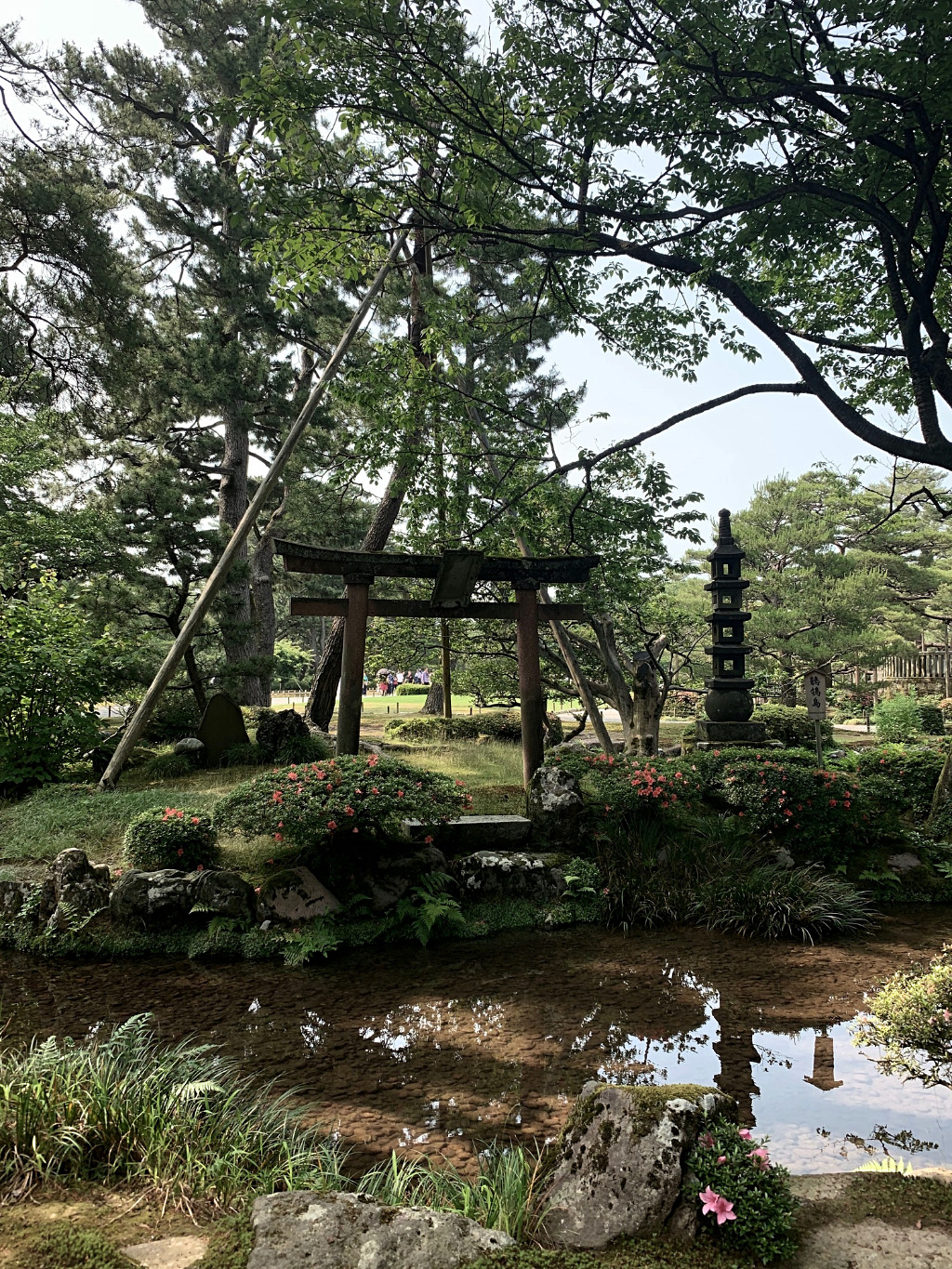 A stone torii gate prominently marks this small landmass along one of the eastern waterways. The island possesses peculiarly shaped stones, intertwined pine trees, and a pagoda, which represent birth, marriage, and death, respectively. It takes the name Sekirei from the wagtail bird, who is said to have taught the gods, Izanami and Izanagi, how to conceive. (Shake your tailfeather…) 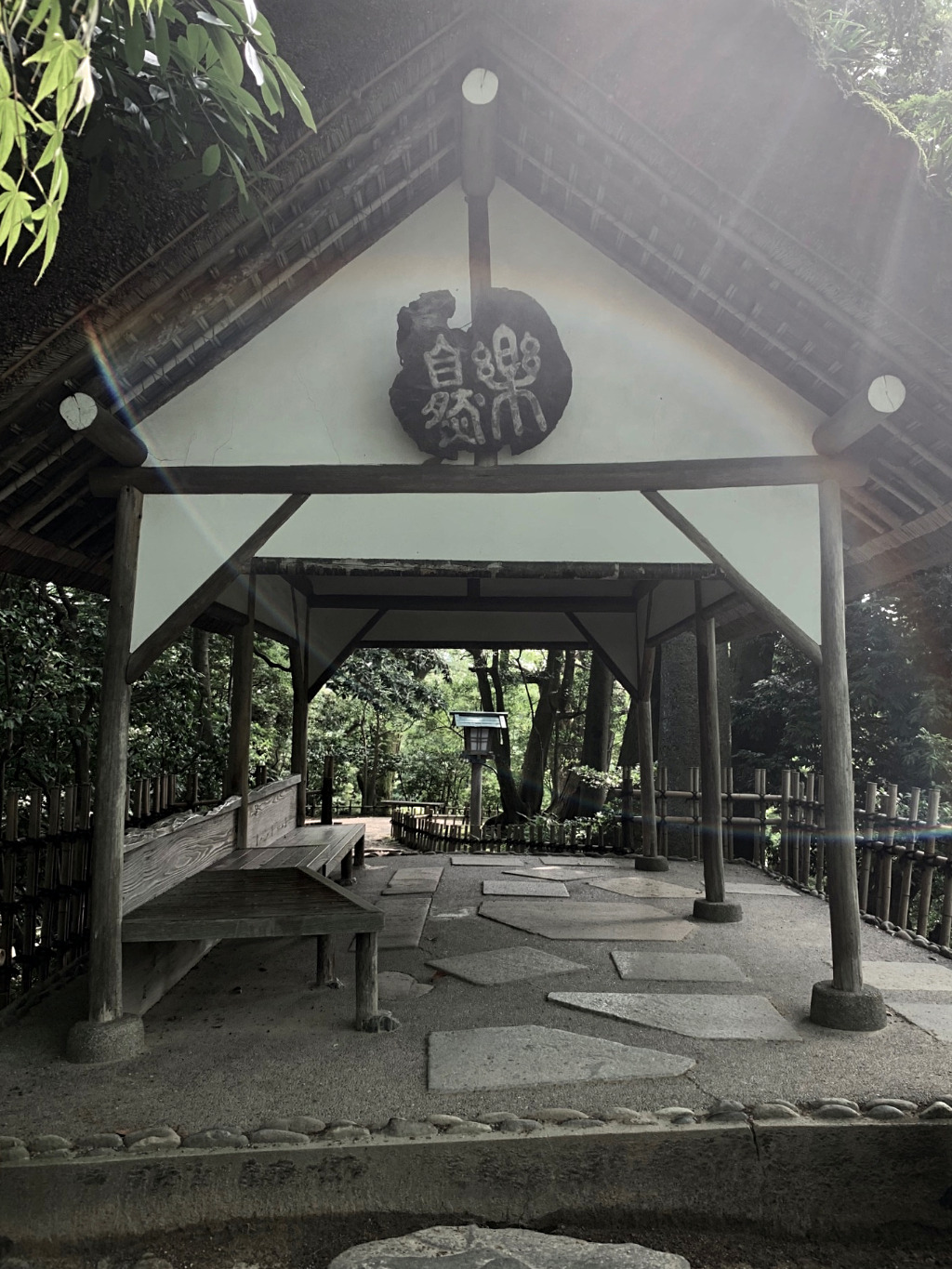 A standing stone engraved with a haiku marks the beginning of the path up Yamazaki-yama, or Yamazaki Hill. At the top, a wooden rest area provides a cool place to rest and a view. And the hill itself is packed with deciduous trees, making this hill one of the most colorful in the garden during autumn, giving it the moniker “Autumn Hill.”

The nearby pagoda is made of local Ishikawa granite. The water from this area eventually makes its way to Kasumi-ga-ike Pond. 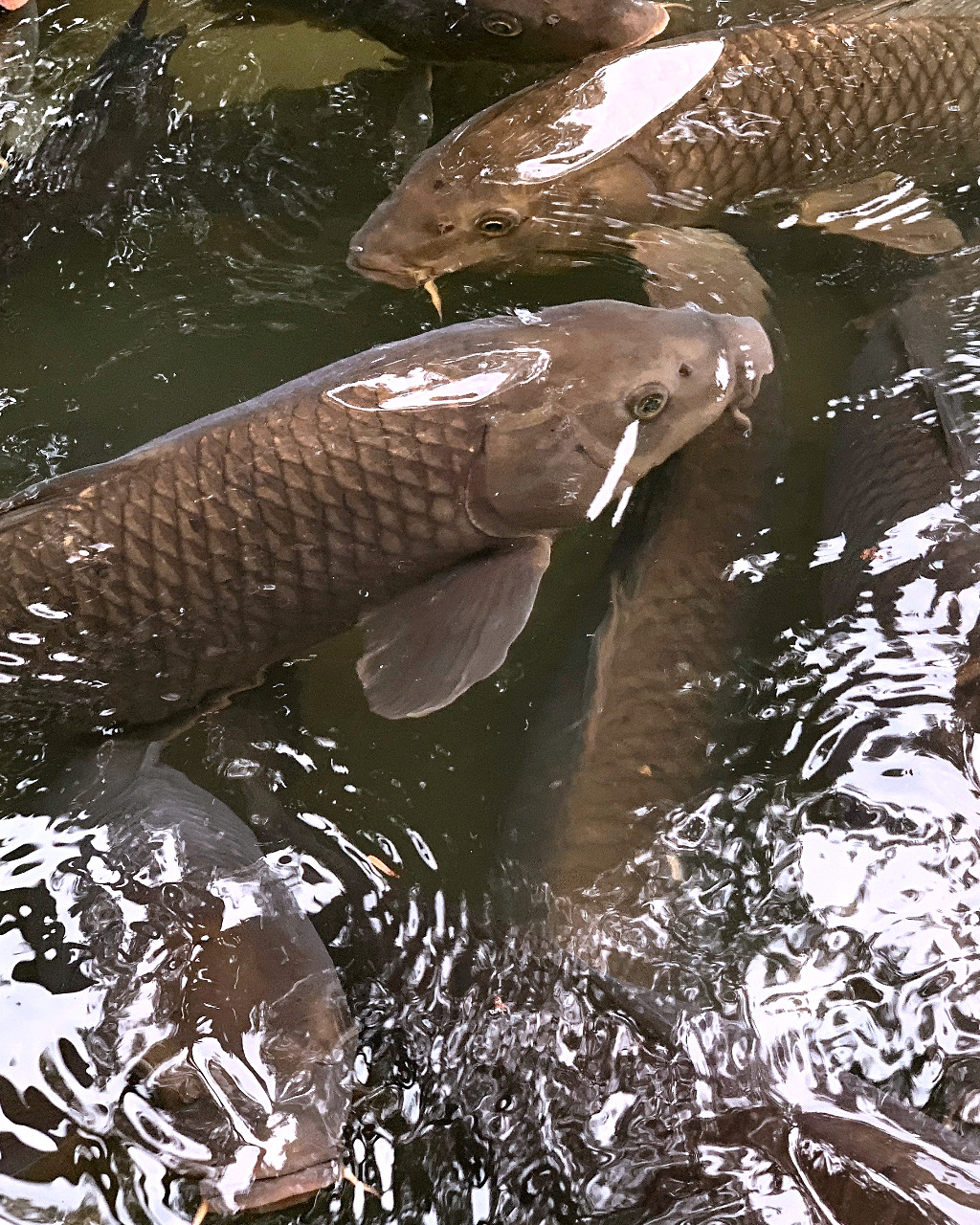