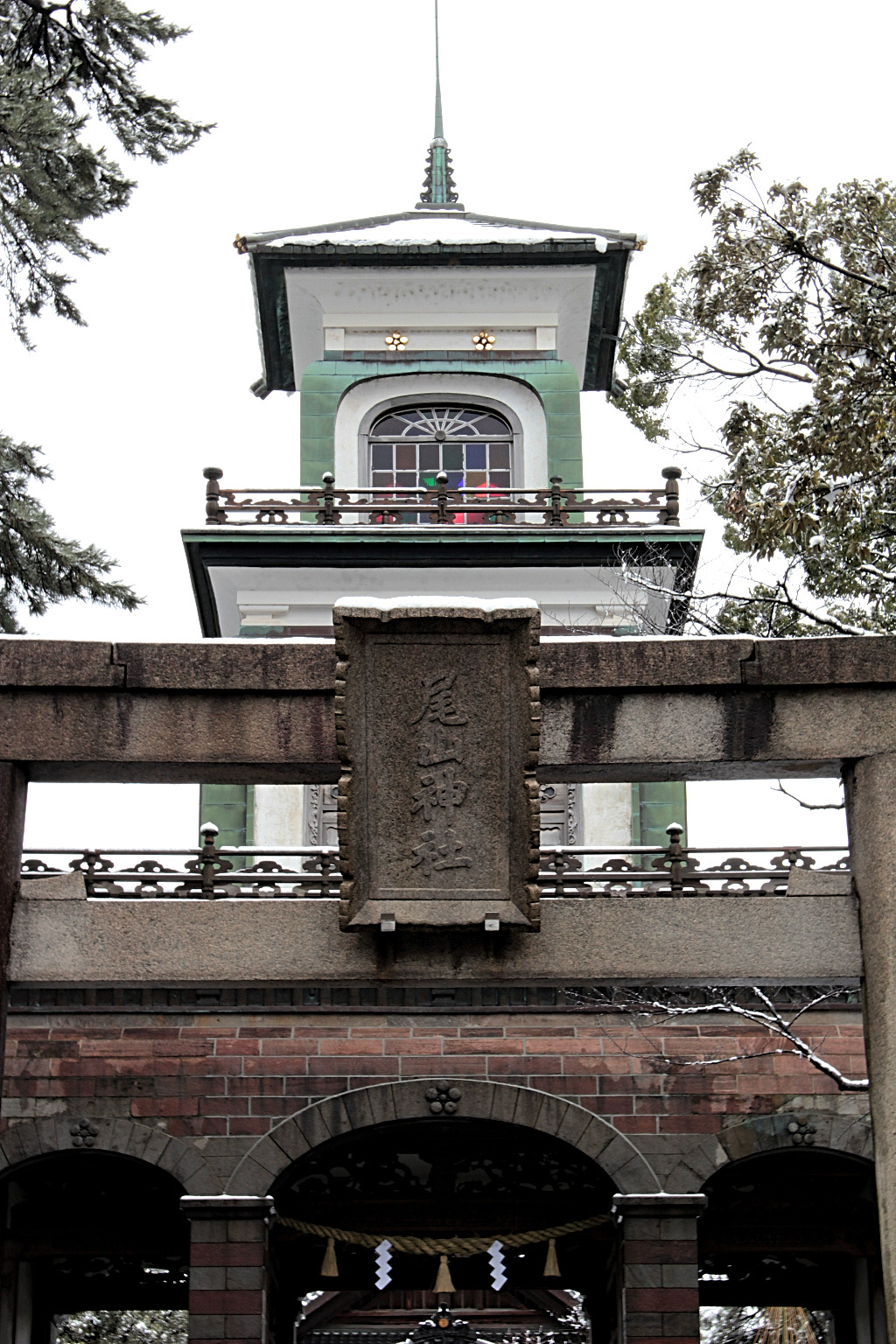 Everyone who comes to Kanazawa visits Oyama, one of Kanazawa’s must-see spots. Passing through the shrine’s modest but proud grounds is enough to make any visitor remark on its beauty. Yet, Oyama Shrine expemplifies Kanazawa’s endless shifts between old traditions and new innovations.

And there’s history aplenty if you know where to look! 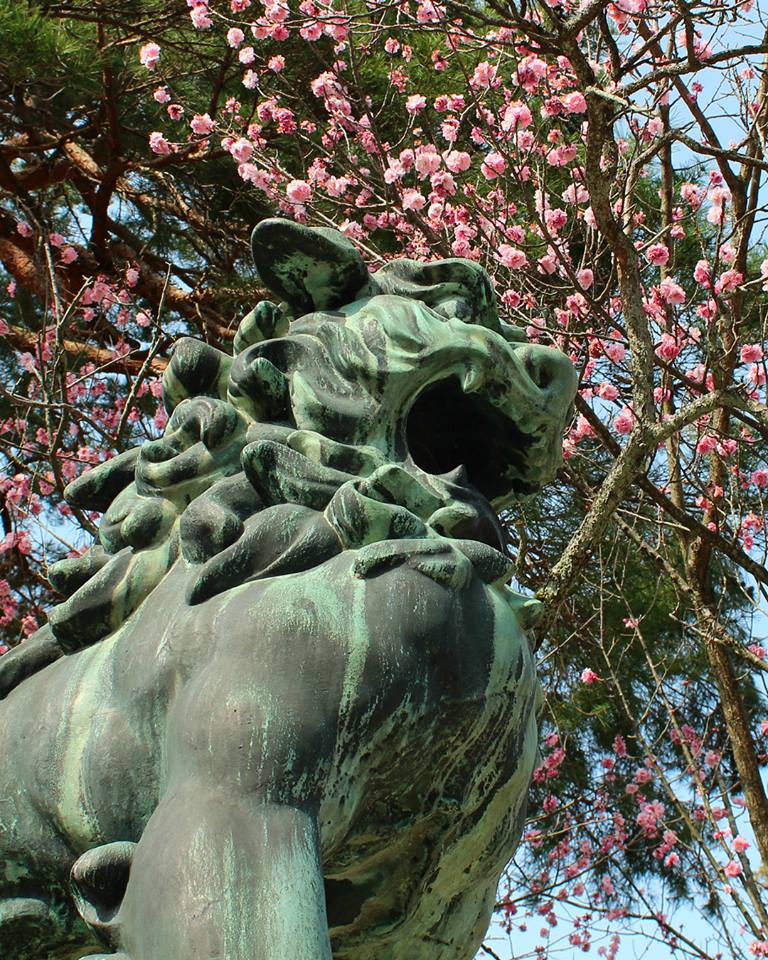 From Lord to Kami 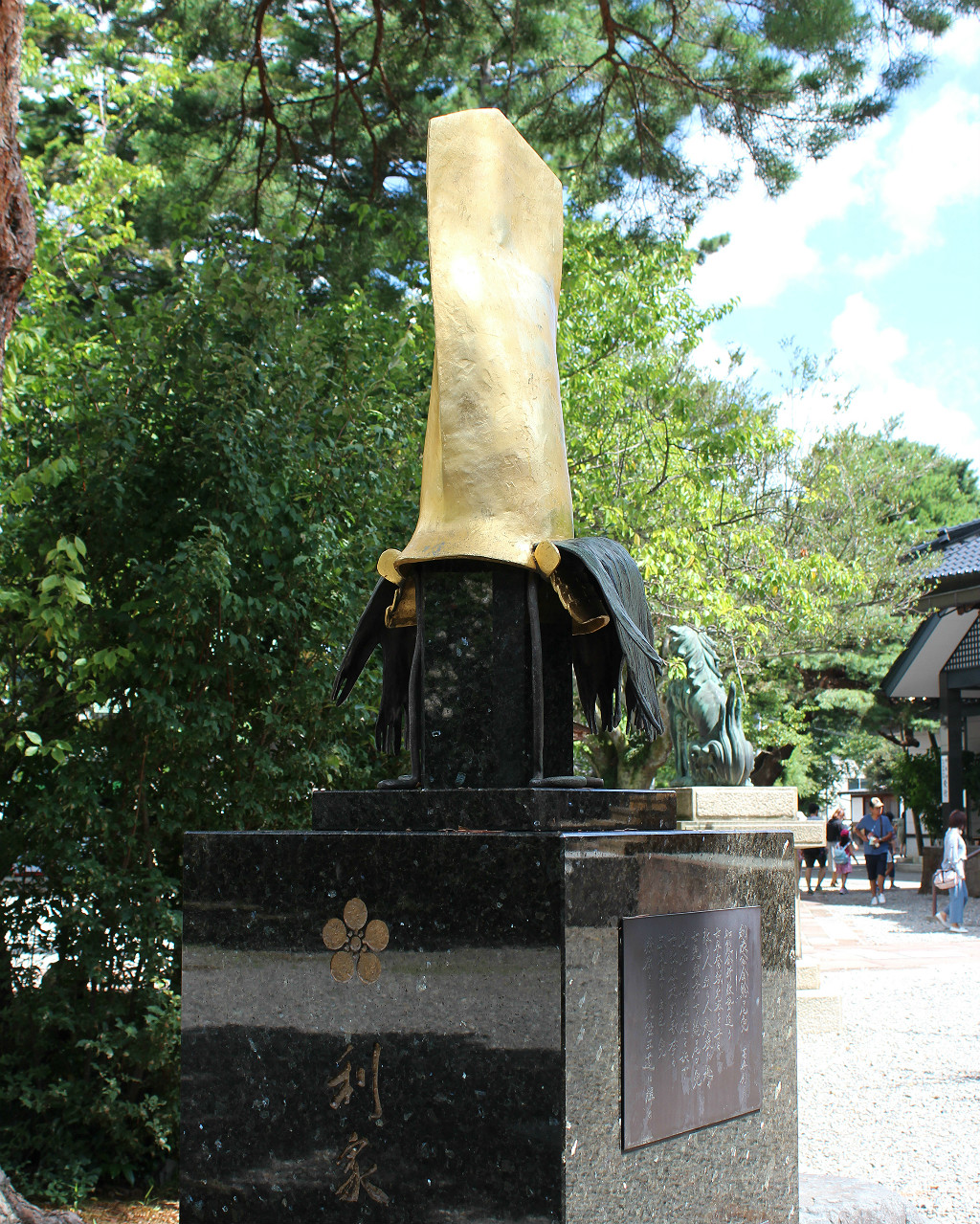 The exceptionally tall catfish-tail helmet that marked Toshiie’s status and lineage is now a recognizable icon in Kanazawa.
Hang around Kanazawa long enough, and you will learn the name Toshiie Maeda. He was the first of Kanazawa’s feudal lords to enter Kanazawa Castle—famously re-enacted during the annual 3-Day Hyakumangoku Festival—and his descendants were all Edo lords of the same clan name. And visitors to Kanazawa can feel Toshiie’s presence most strongly at Oyama Shrine. 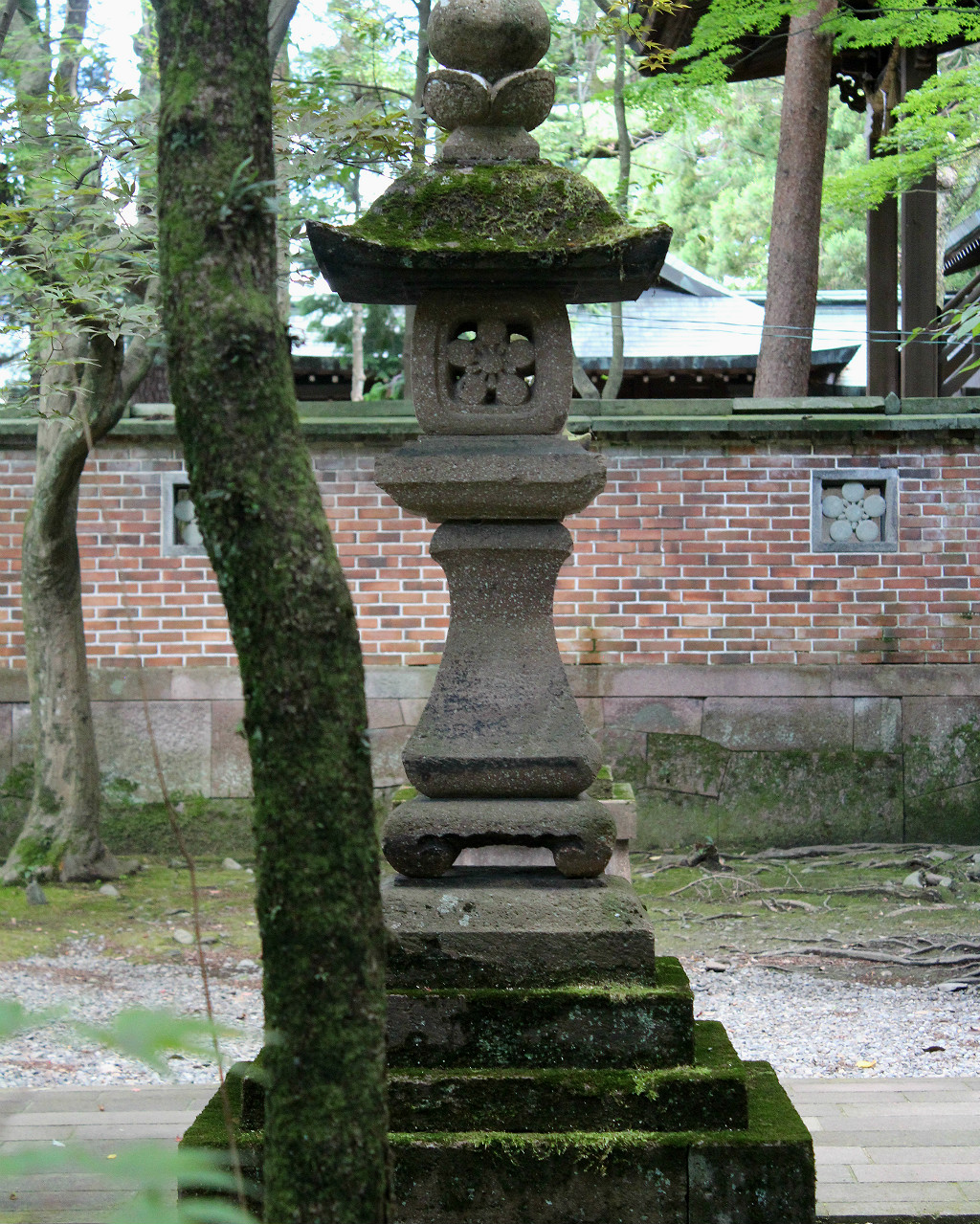 In Shinto belief, anything and anyone has the potential to become a kami, a kind of god. Only faith is required for Shinto’s form of animism. As a well-established Warring States general, relatively long-lived, and garnering wealth for his new domain, Toshiie was quickly recognized and enshrined as kami. The patriarchal founder of Edo-era Kanazawa was first immortalized after his death four centuries ago in the Utasu Hachiman Shrine along the Utatsu mountainside above the Higashi Chaya geisha district.

From Mountain to Castle

Utasu Hachiman Shrine began falling into disrepair, so the enshrined lord was moved to his new location near Kanazawa Castle. At the shrine’s establishment in 1873, it was granted the name “Oyama,” the name of Kaga’s governing body just prior to Toshiie’s victorious march into the castle town. 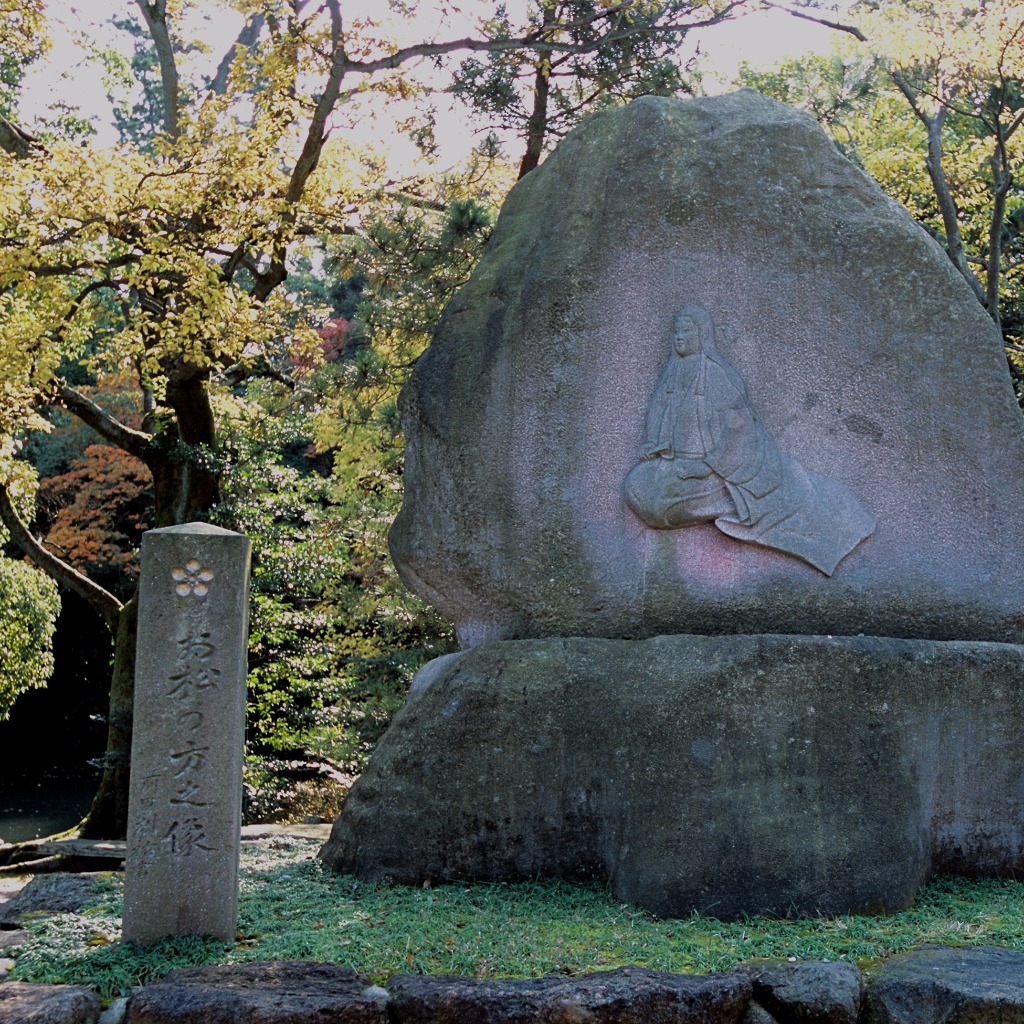 A monument dedicated to O Matsu no Kata at Oyama Shrine, courtesy the City of Kanazawa.
Toshiie’s first wife—and first cousin!—Matsu joined him at Oyama only two decades ago. Both are honored with statues and monuments across the shrine grounds, along with a collection of national and prefectural treasures honoring the couple and the region over which they ruled.

From the Netherlands to Japan

The massive gate at Oyama Shrine’s entrance is infamous for its design. Kanazawa’s contemporary master carpenter, Tsuda Kichinosuke, was commissioned to design the gate, which was completed in 1875. 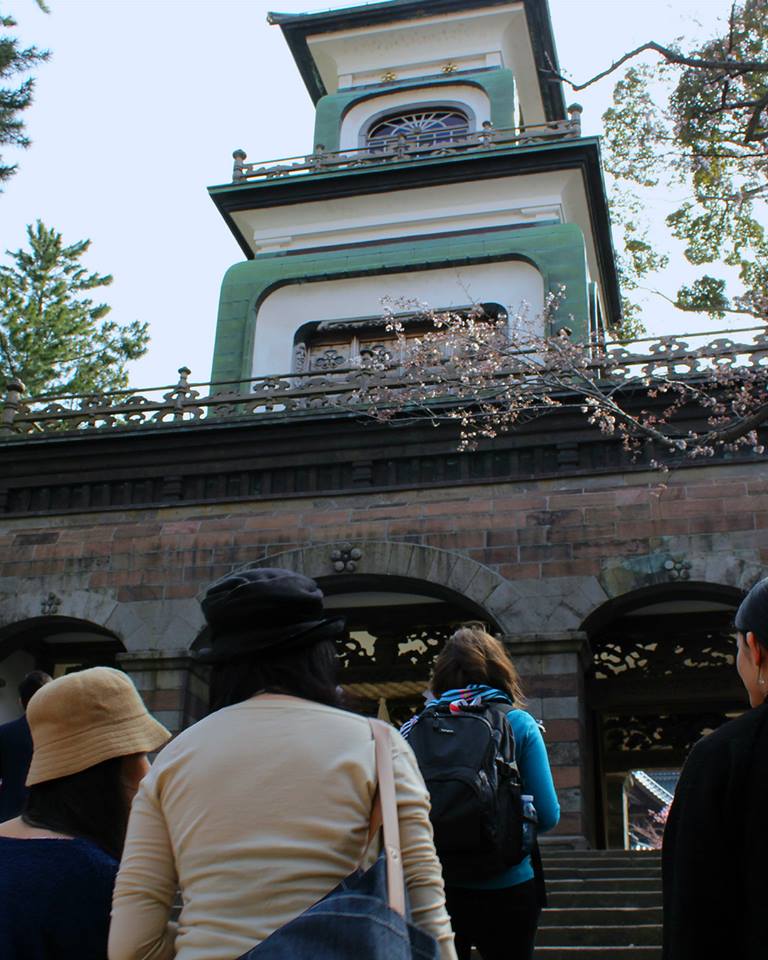 The gate incorporates three different cultural influences in its design: Japanese, Chinese, and Dutch. The rounded corners are reminiscent of Chinese architectural depictions of the mythological Dragon Palace. The diamond cut stained glass on the top tier is Dutch, as is the lightning rod atop the roof, believed to be the oldest in Japan.

Locals considered the gate an eyesore when it was first built. (Kanazawa Station received a similar reception upon its construction!) Many believed it was “not Japanese enough,” and therefore inappropriate for the shrine. But that hasn’t stopped Oyama from becoming one of the top must-see spots for both domestic and foreign tourists, and one of the two most popular shrines for New Year visits. 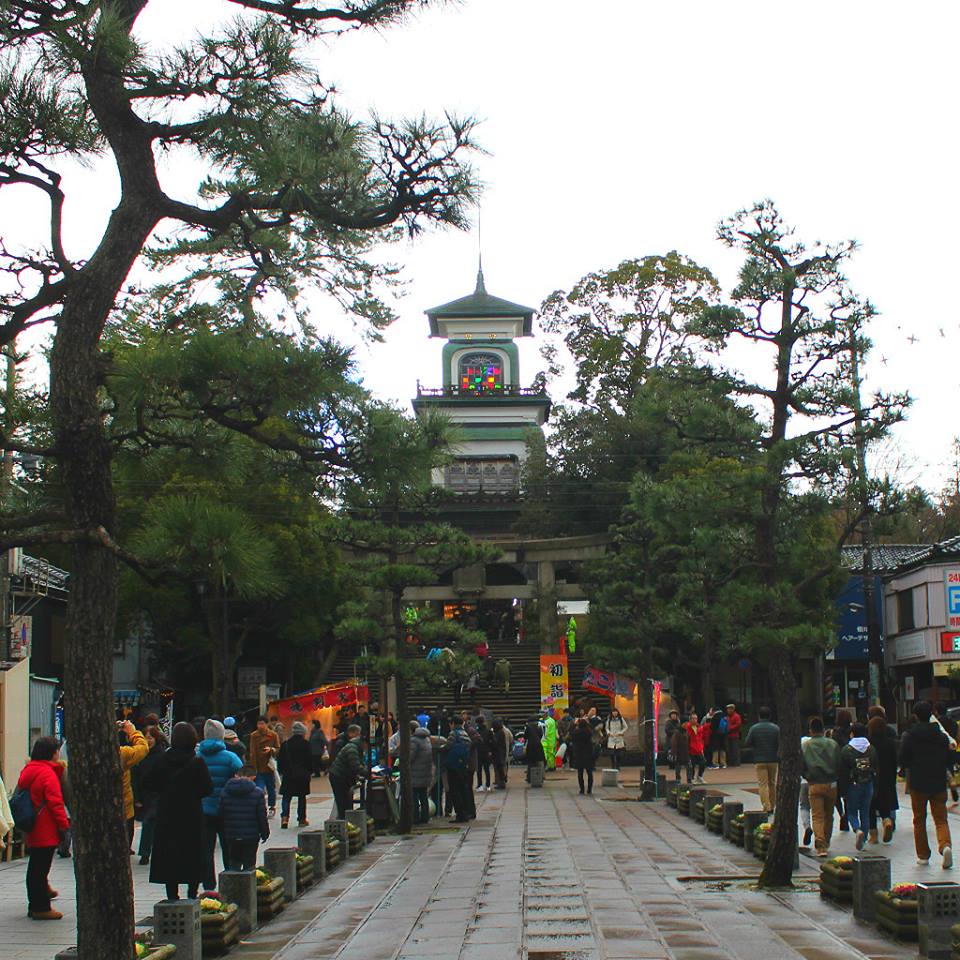 Once used as a lighthouse that could be seen as far as the port town of Ono, the stained glass windows are still illuminated in the evenings. 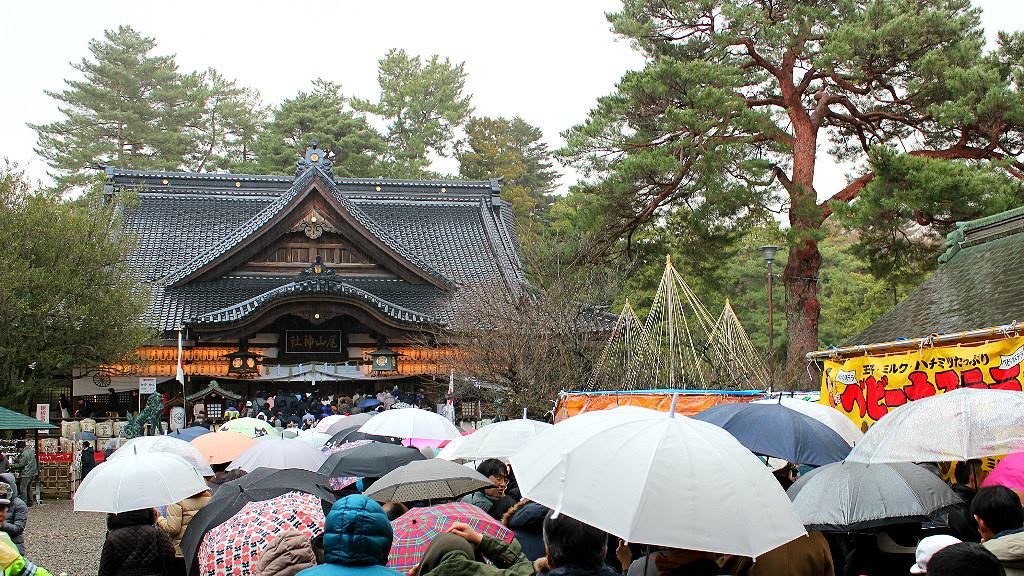 Oyama Shrine is one of Kanazawa’s two busiest shrines during the New Year holidays. 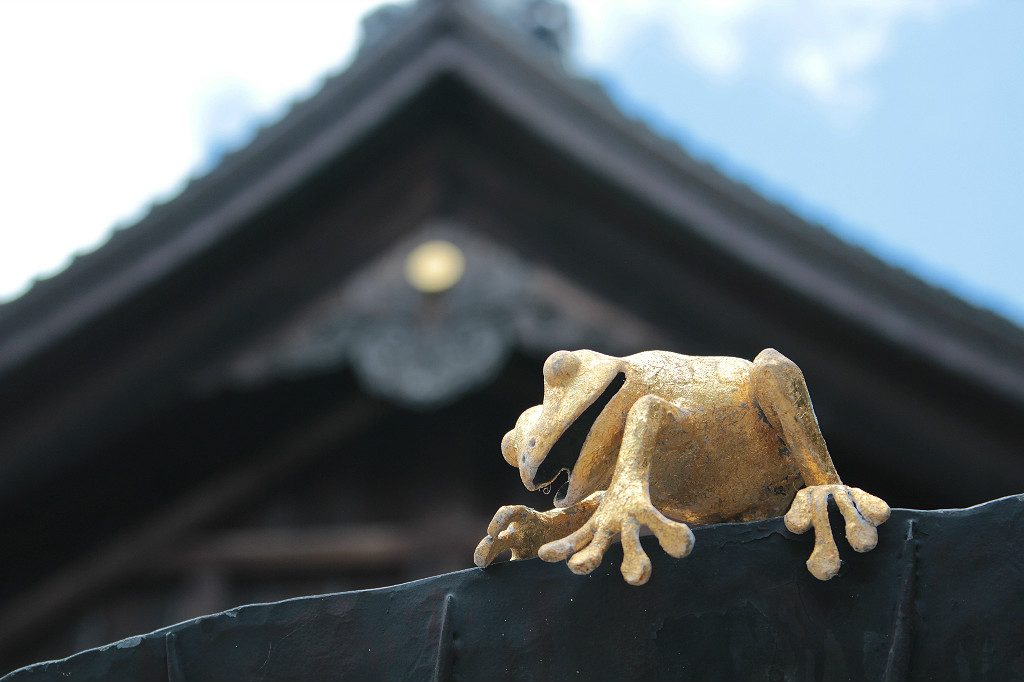 The shrine is littered with meaningful statues and art installations, dedicated to everything from the Maeda family and Kanazawa history to parenthood and long life.

Formerly the private garden of guest houses for the nobility, the shrine garden pond has its own beauty and nuance. The shape of the bridge and islands are fashioned after the traditional musical instruments used in gogaku, the predecessor to Noh theatre. Because of this, it also holds the moniker Gakki no Niwa, “The Garden of Musical Instruments.” It’s designated as a Scenic Spot of Ishikawa Prefecture. 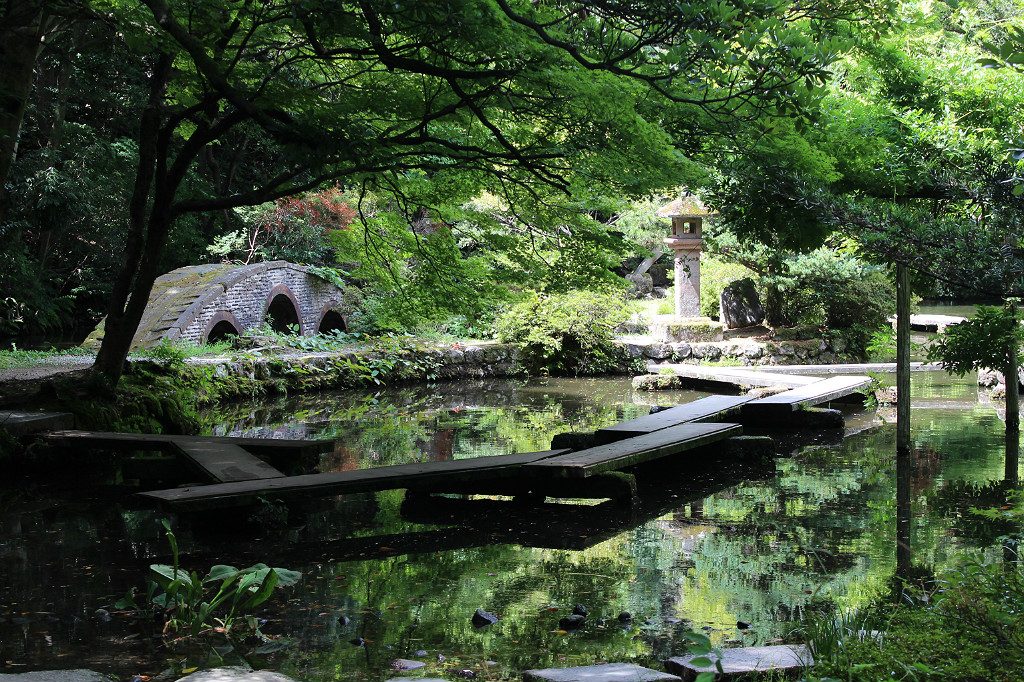 Visitors are welcome to stroll the garden in good weather. Koi fish and Japanese turtles take residence in the waters. Summer visitors should beware of mosquitoes, however. 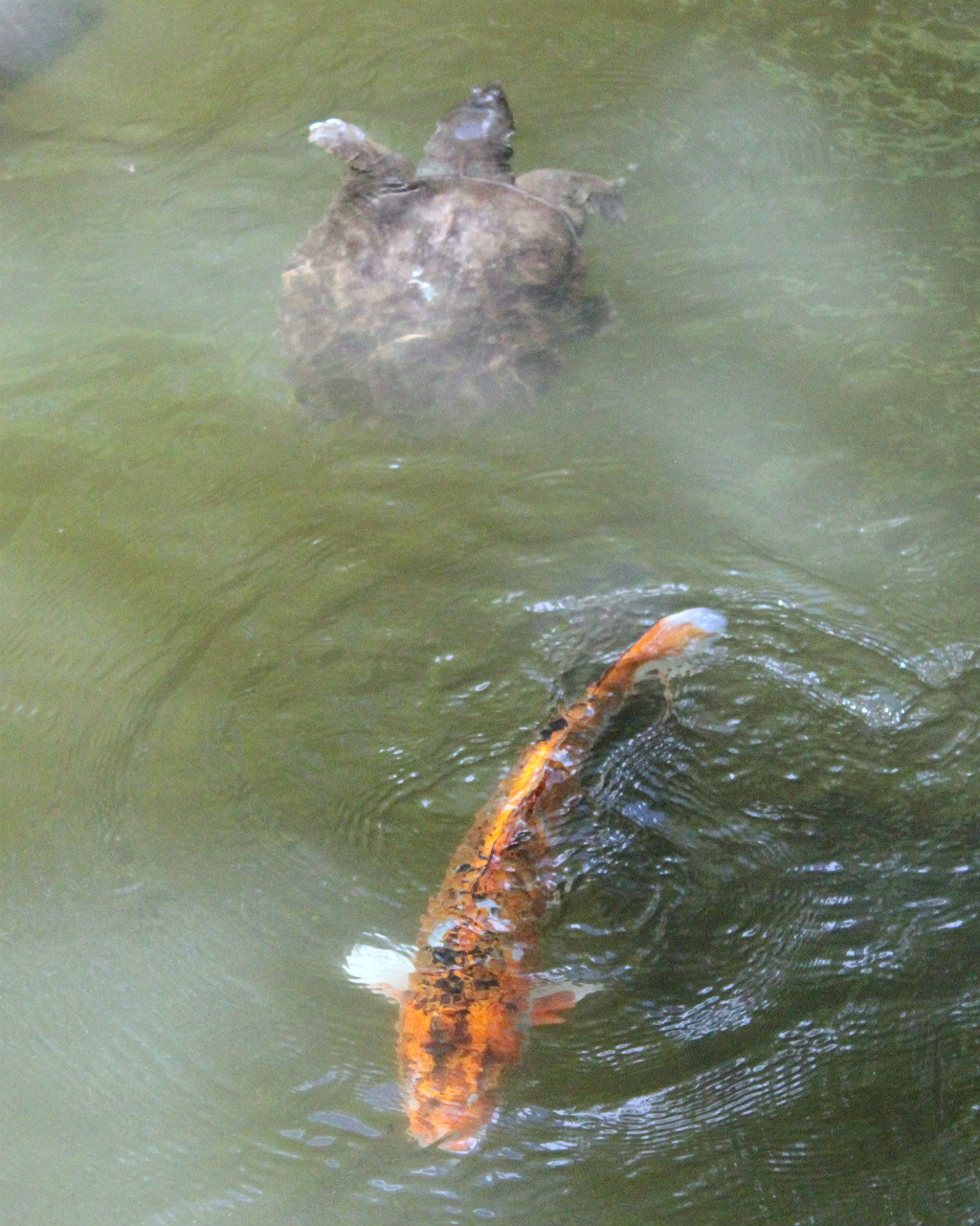 At the back entrance of Oyama Shrine is an elaborate wooden gate, ornately decorated with dragons dancing through clouds. The karahafu gable, the curving style of its roof, is distinctly Japanese, and reflects the rounded front of the main shrine. The design is from the same era in which Toshiie Maeda lived, an appropriate homage to his rule. 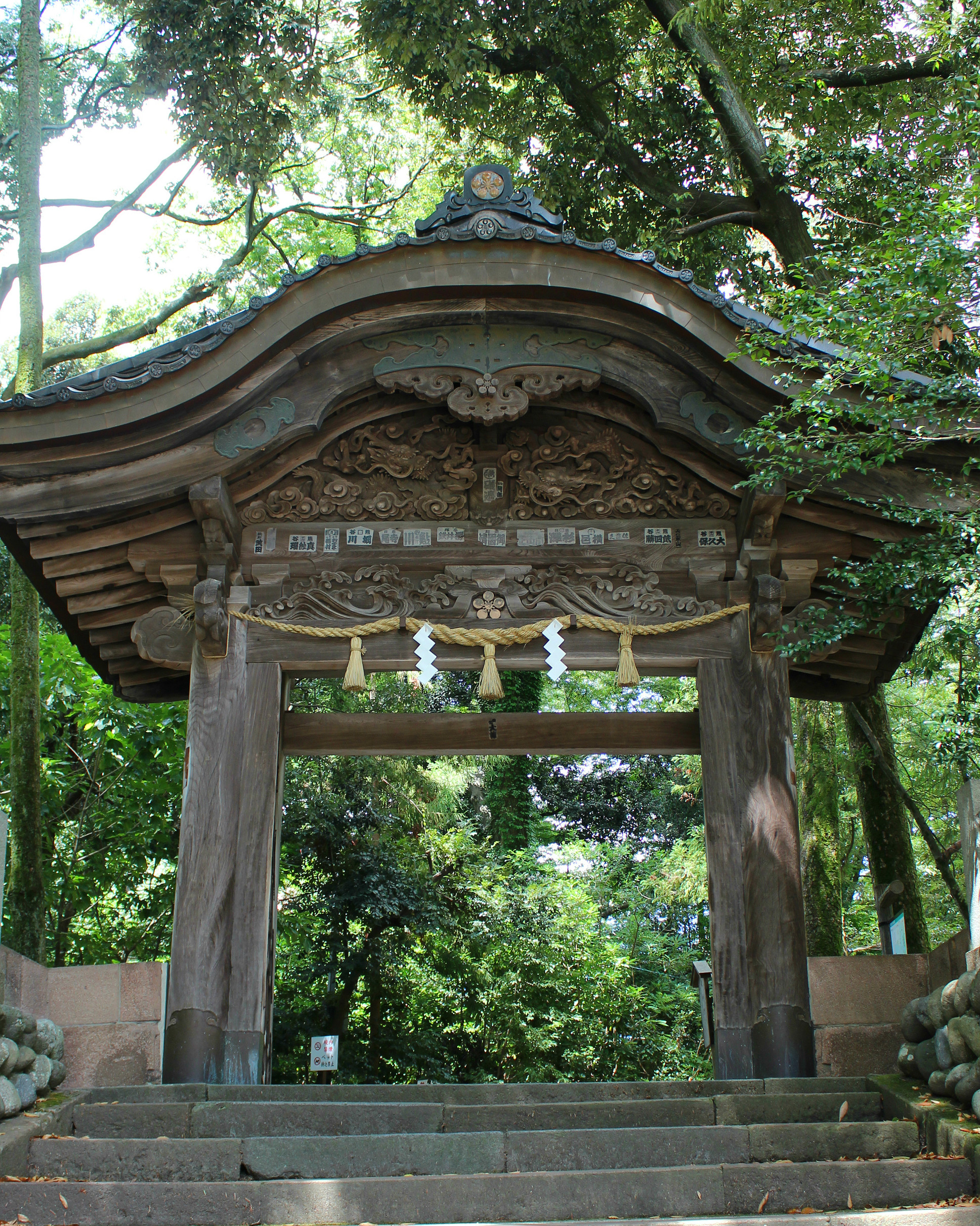 This gate was originally the main gate of Kanazawa Castle’s ninomaru, or outer court area. Despite multiple fires in the castle’s ninomaru, this gate never burned. It was believed that the engraved dragons expelled water that protected it. It is now designated a Tangible Cultural Asset of Japan. 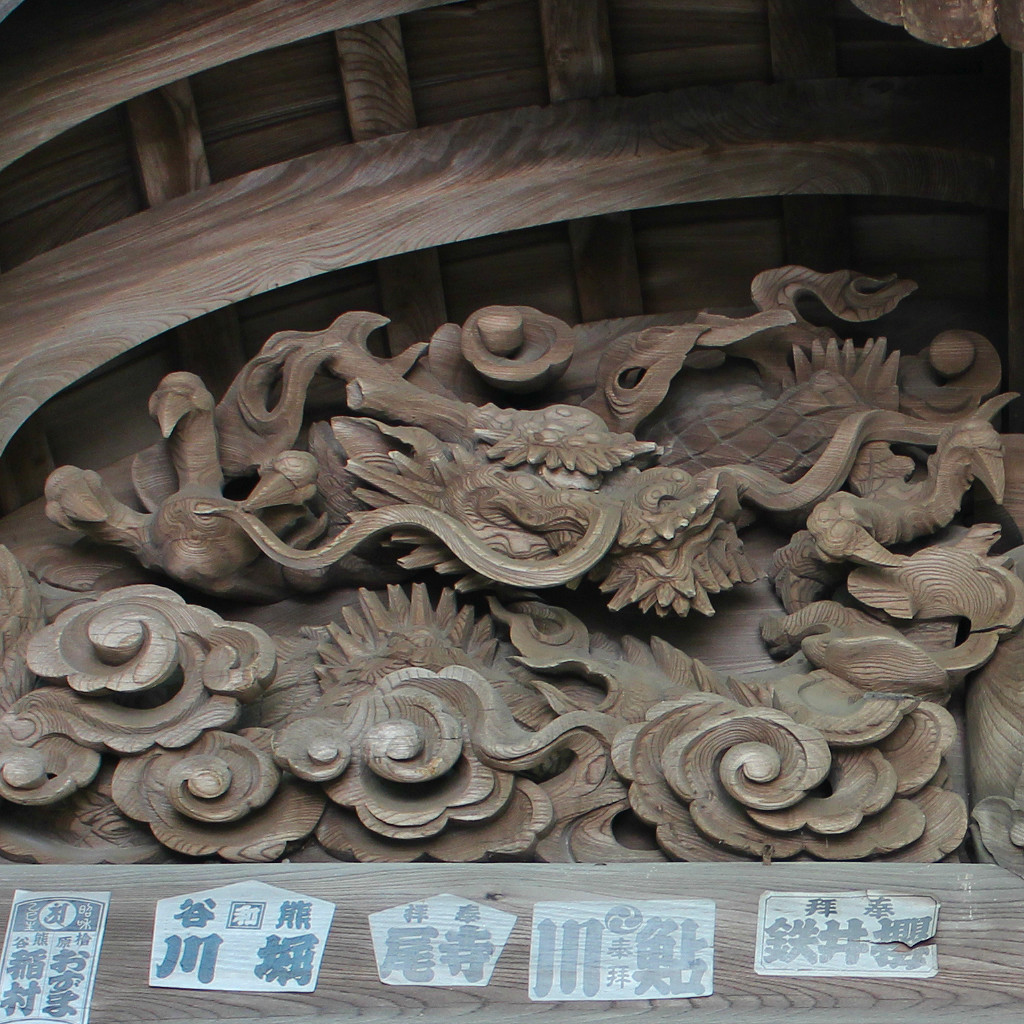 The haiden, or front-most hall is where worship takes place. Rarely, it offers a view of the honden, or back-most holy shrine area, to the public. It’s within the honden that Toshiie and Matsu are enshrined. Even the priests face the honden more often than they face the crowds during ceremonies and presentations of offerings. 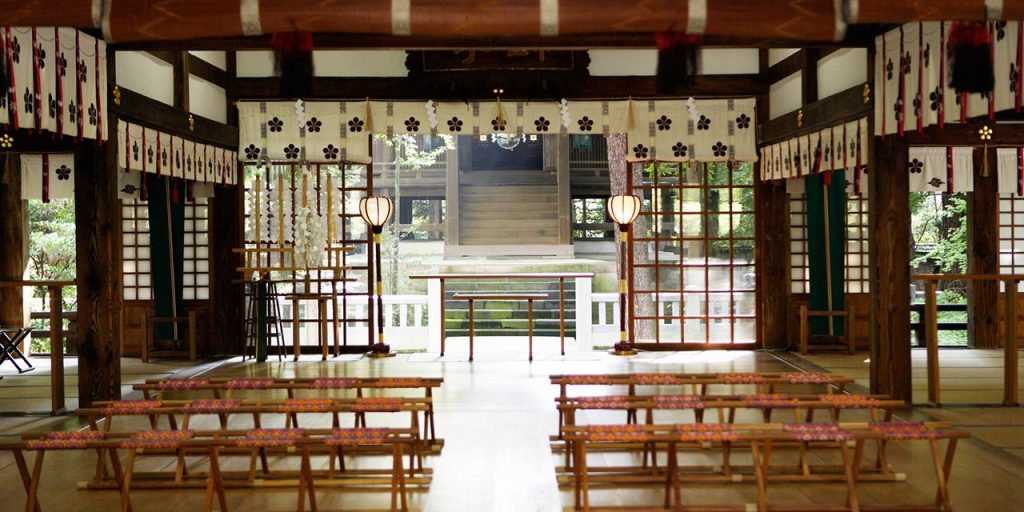 courtesy of Oyama Shrine
Most of the time, visitors are not permitting in the interior. However, special occasions do open up limited seating. Special holidays, like Setsubun on the 3rd of February, or the Oyama Festival which runs concurrent to the larger, louder Hyakumangoku Festival, present the public with a number of ceremonies, demonstrations, and activities. 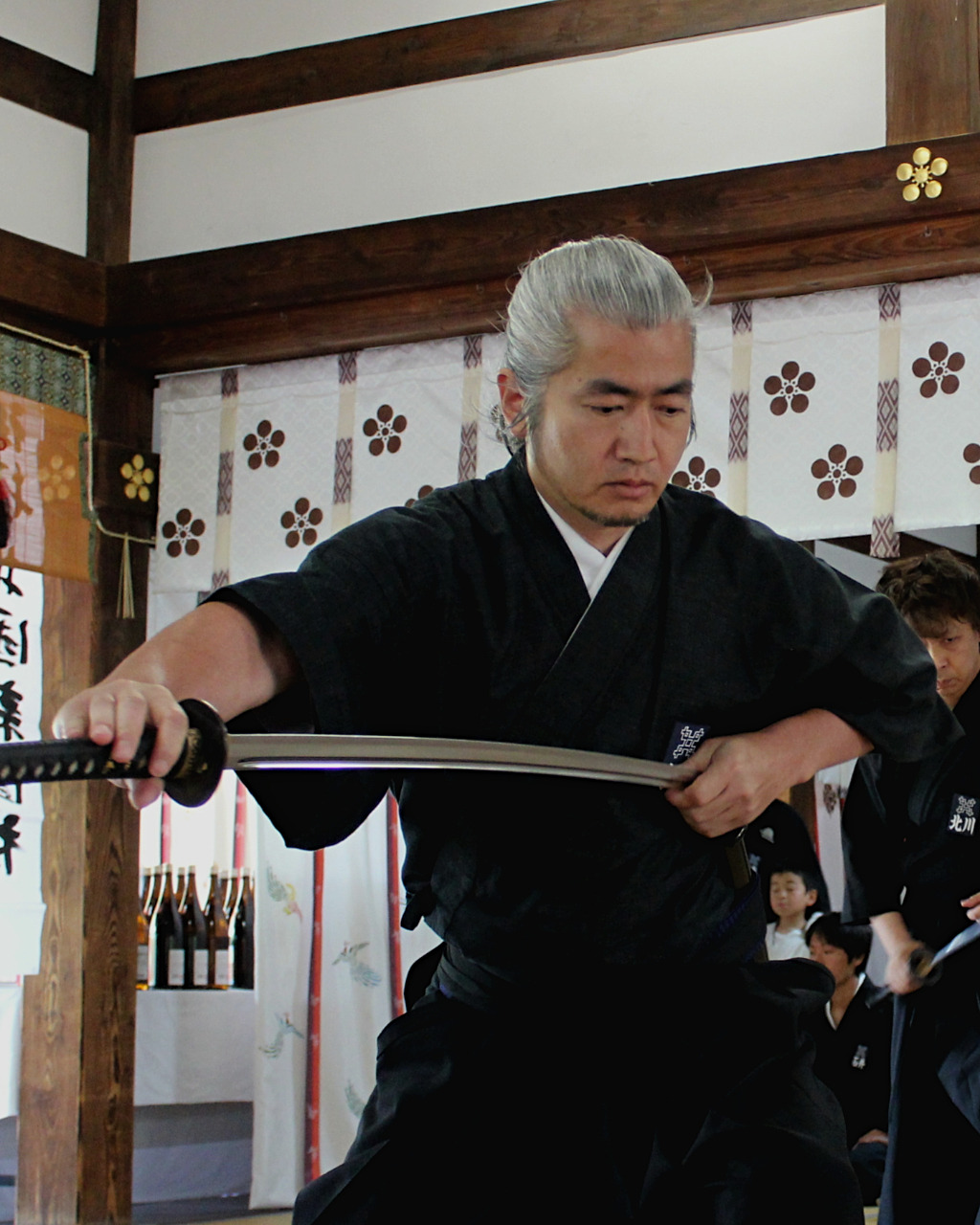 A demonstration of iaido, or sword drawing technique, in the main hall of Oyama Shrine, during the Oyama Festival in early June.
Please only enter the shrine as a non-praying visitor during these special events.

In this mask’s name, the aku of akujou usually translates as evil, though in Noh theatre, it more often refers to austerity or ferocity among god and demon characters. However, this mask may be the exception. Called the “Mask of Faint Breath,” its face conveys a haunting darkness. It’s even boxed separately from the other masks in Oyama’s collection. 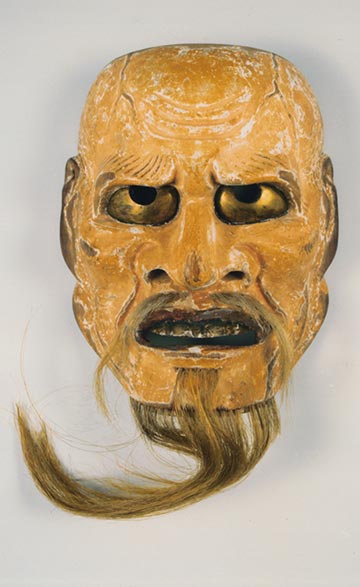 courtesy of Oyama Shrine
The story goes that the mask was drawn from the sea near the Noto Penninsula in the early 17th century, marked by a glow in the water as it hit a fisher’s net. Once brought to the fisher’s home, the mask began to chant and breathe from its mouth.

As such things do not belong with ordinary people, the mask was presented to the Maeda family. But after repeated strange occurrences, even the Kaga lords could not see keeping the mask in a traditional house, and so it was dedicated to Oyama Shrine.

Even today, the mask is said to bring about clouds when its box is opened, and so it is kept locked away. Despite its secrecy and the fact that even Japanese visitors are not permitted to look upon it, its legend is still murmured among those who remember.

Oyama Shrine (sometimes as “Oyama-jinja Shrine”)
9:30 a.m. – 18:00 p.m.
11-1 Oyama-machi, Kanazawa. 920-0918
900 meters from Kaname Inn
Notice concerning COVID-19: Information and services for the above sites may be temporarily suspended due to the coronavirus pandemic. Please check again close to the dates of your visit. Guests of Kaname Inn Tatemachi may also use our concierge service to make inquiries as necessary. Thank you for your understanding, and we eagerly look forward to your stay.
Rachel