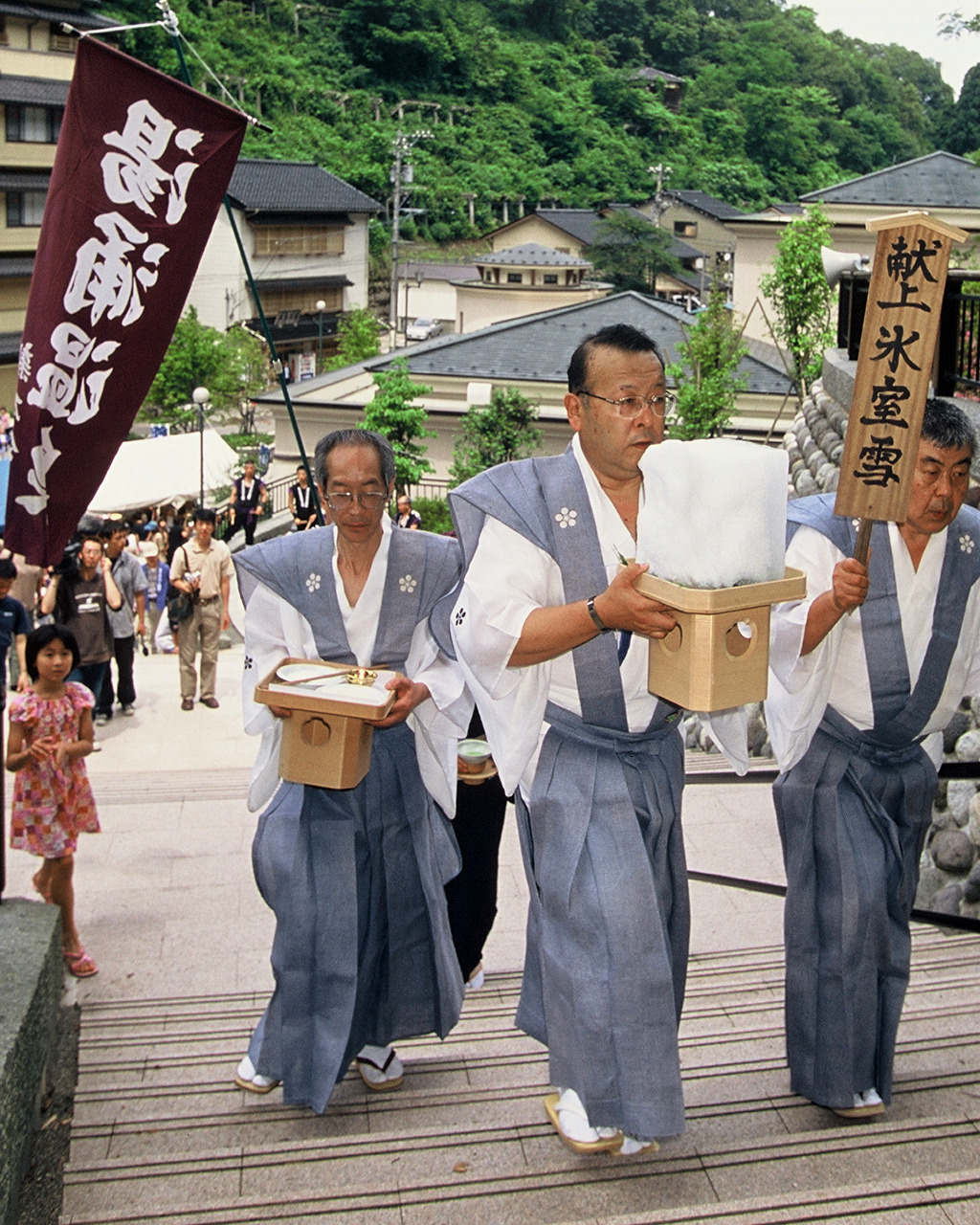 courtesy the city of Kanazawa
In southeast Kanazawa, on a mountainside, nestled in a dense forest, up a hill and beside a lake, is a tiny thatched hut called Himuro Koya, the Ice House Cottage. Twice a year folks from all over Ishikawa Prefecture gather here to celebrate a practice that dates back to the early Edo-era: The creation of ice from winter snows and the delivery of that ice to the capital at the summer’s start. 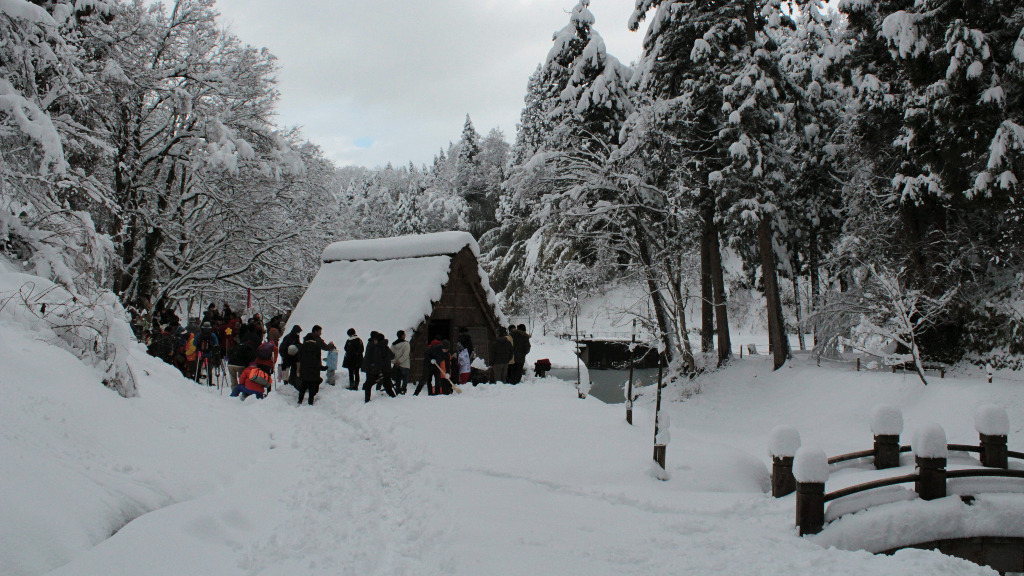 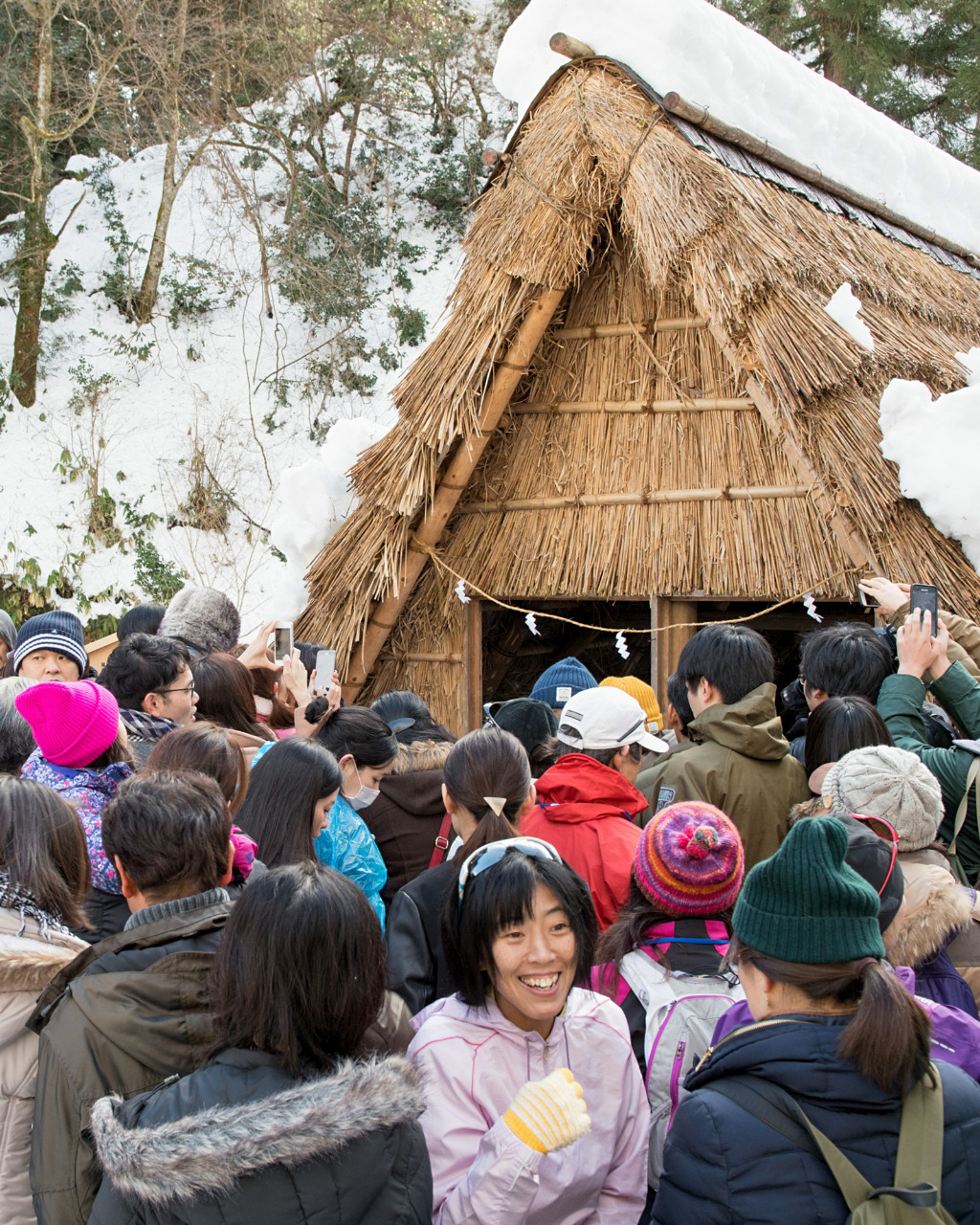 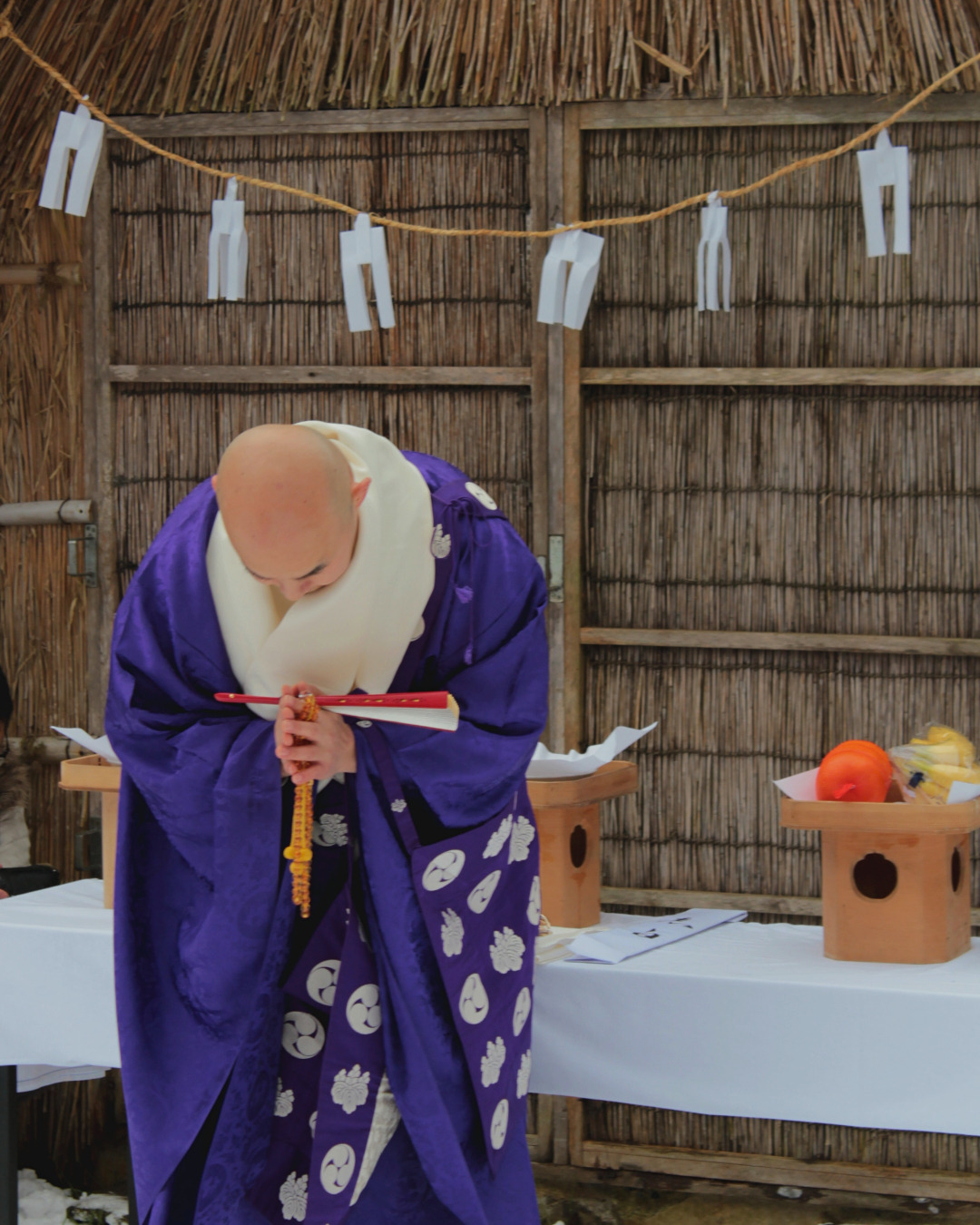 Crowds gather the morning of the last Sunday in Janauary as a priest of the local shrine honors the kami, the spirit of the ice house offerings and a prayer for the coming year. The doors of Himuro Koya open, and the first scoops of freshly-fallen snow are ceremoniously shoveled into the small cellar of just 4 x 6 x 2.5 meters. 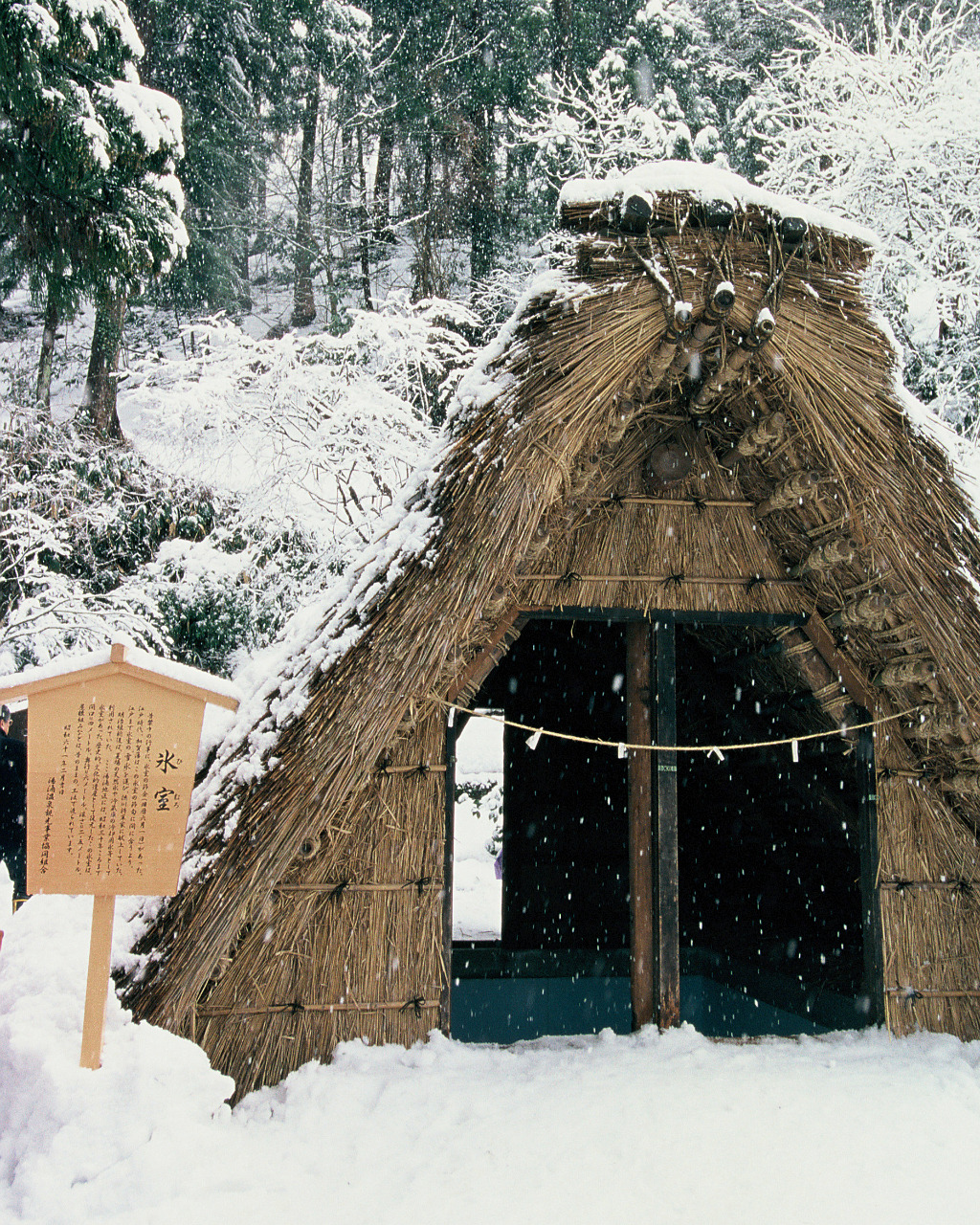 courtesy the city of Kanazawa
Back down the hill in the town of Yuwaku Onsen, vendors set up booths to sell seasonal goods. In the plaza area between Yumeji-kan and the Shirasagi Bathhouse, visitors can warm up with a specially produced local sake. 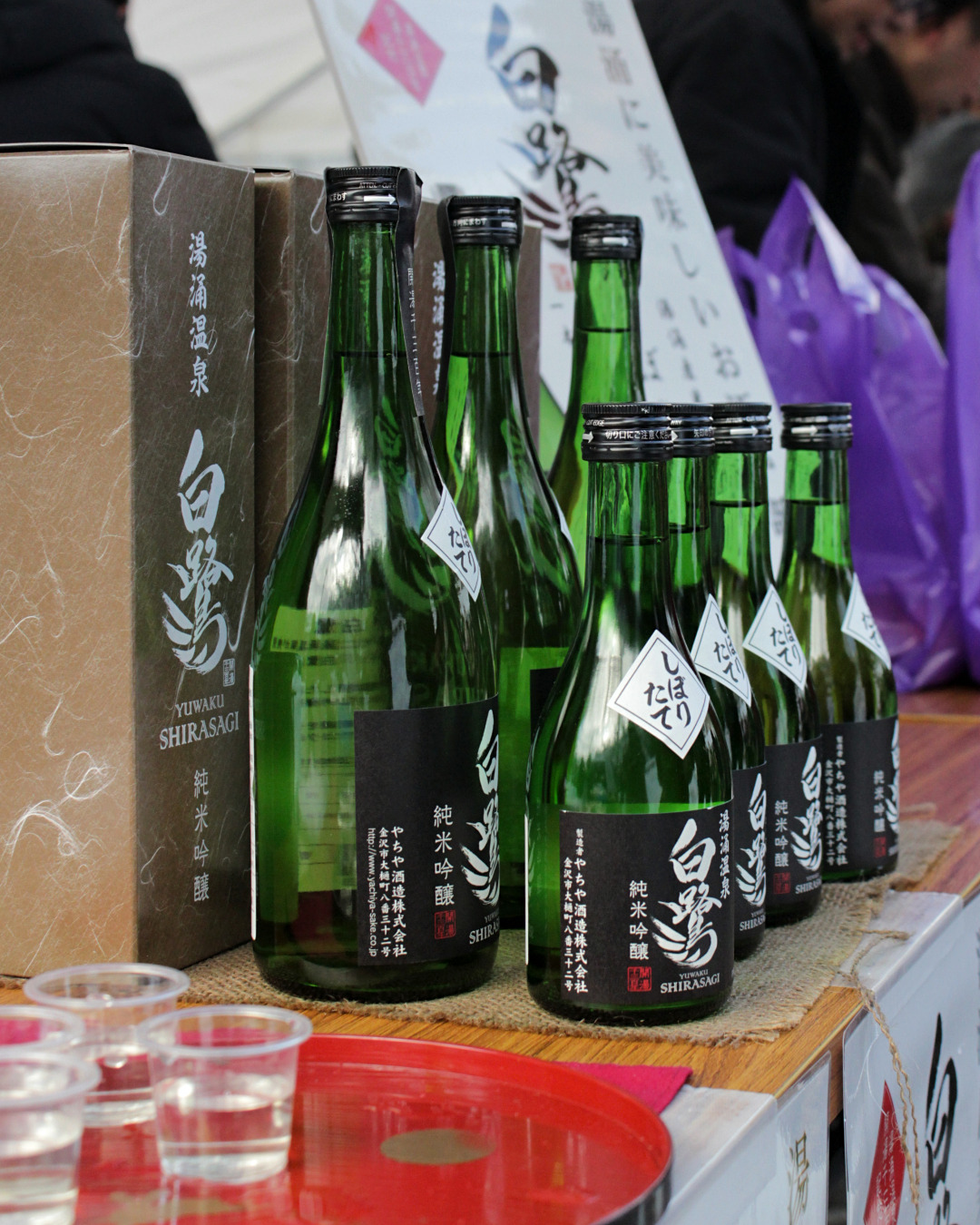 Kanazawa’s winter soup, metta-jiru, takes the commonly available ton-jiru; with its pork broth, miso, meat and vegetables; and alters the flavor with the Kaga sweet potato for a regional twist. A large bowlful is sold for only 100 yen, a generous and delicious way to warm up in the cold. 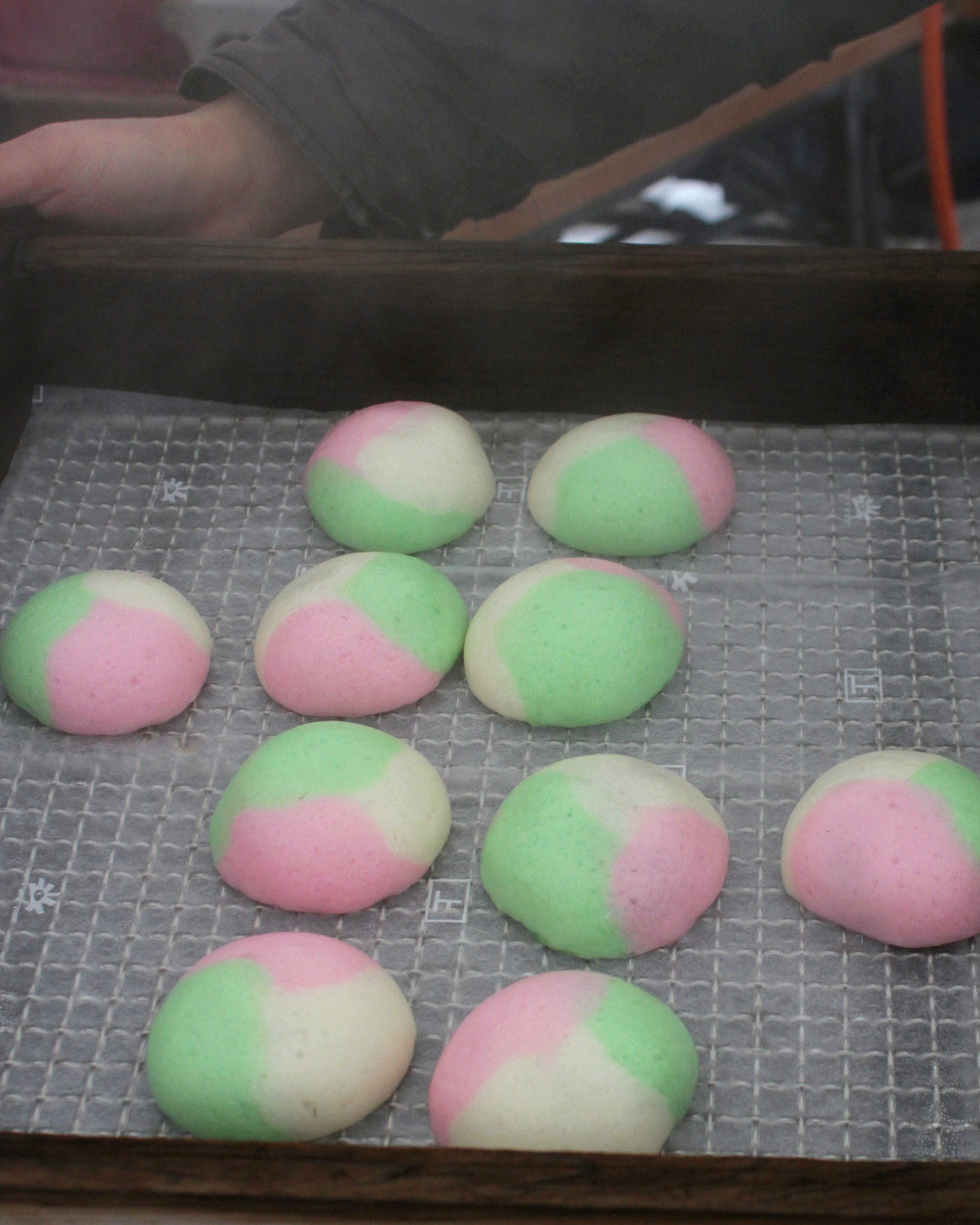 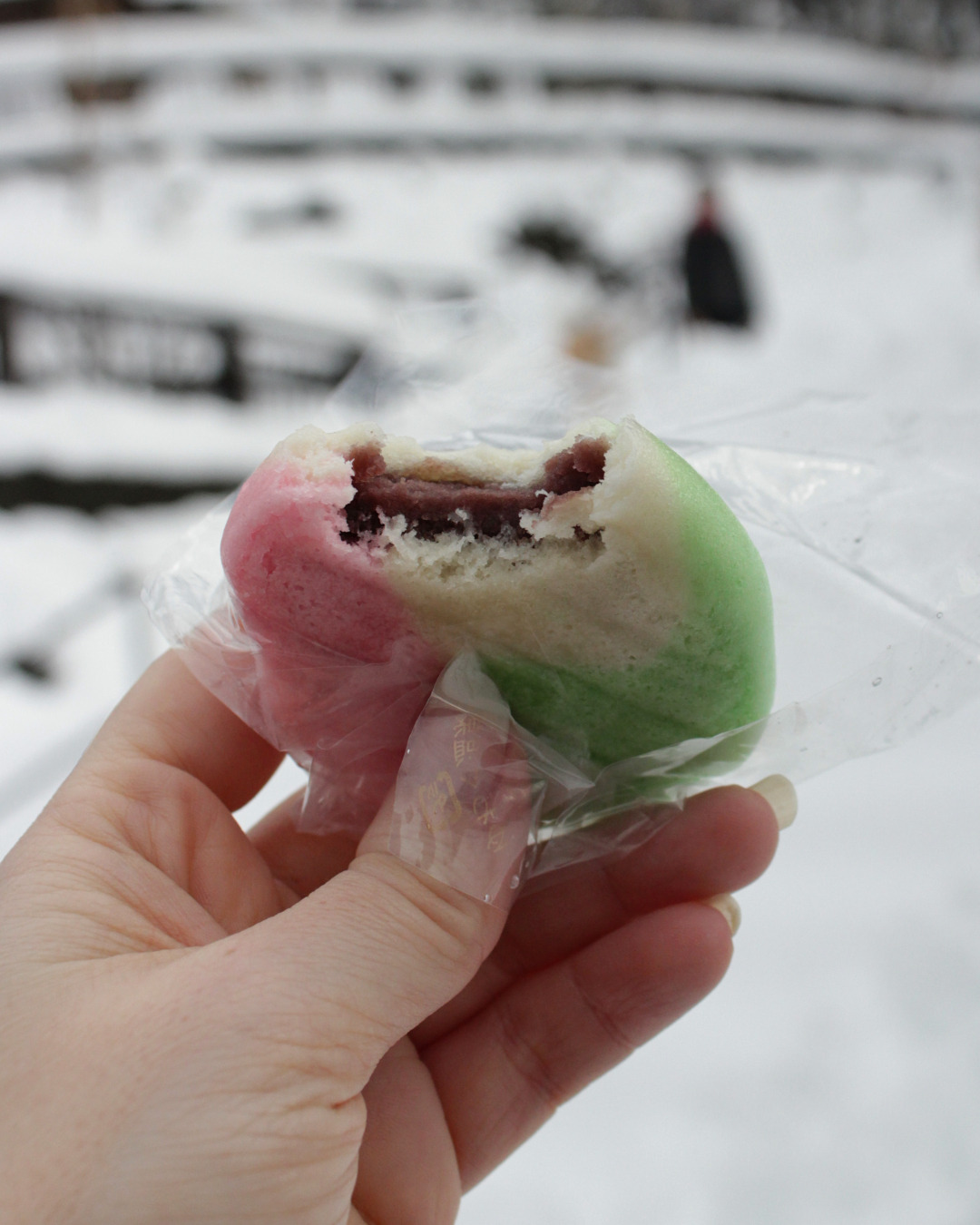 Unlike most manju, this “ice house” manju uses wheat and is eaten with the belief that it blesses one with good health for a whole year. Central Kanazawa only sees this treat during the summer season around the June 30th festival, but this tri-colored version unique to Yuwaku is available year round. 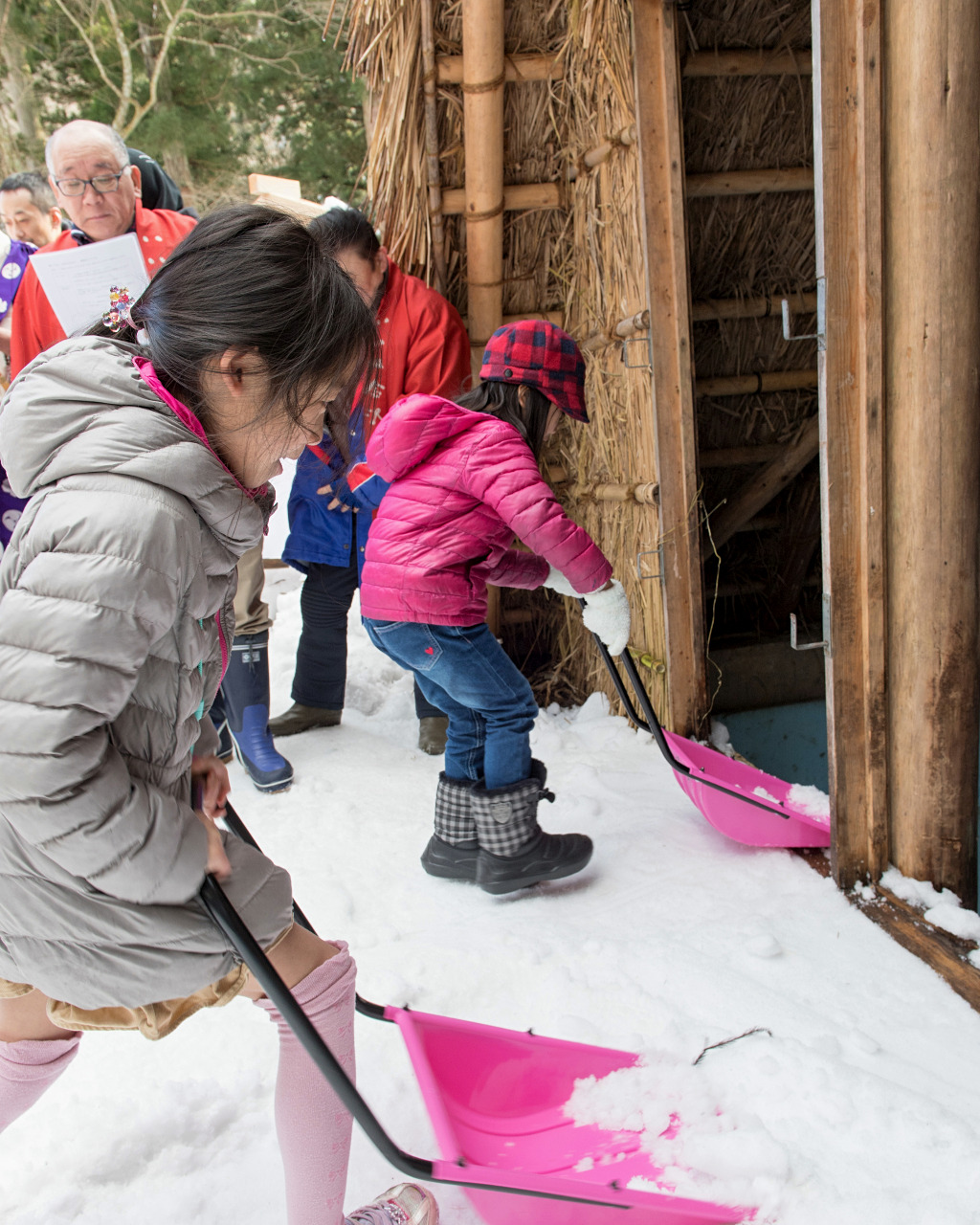 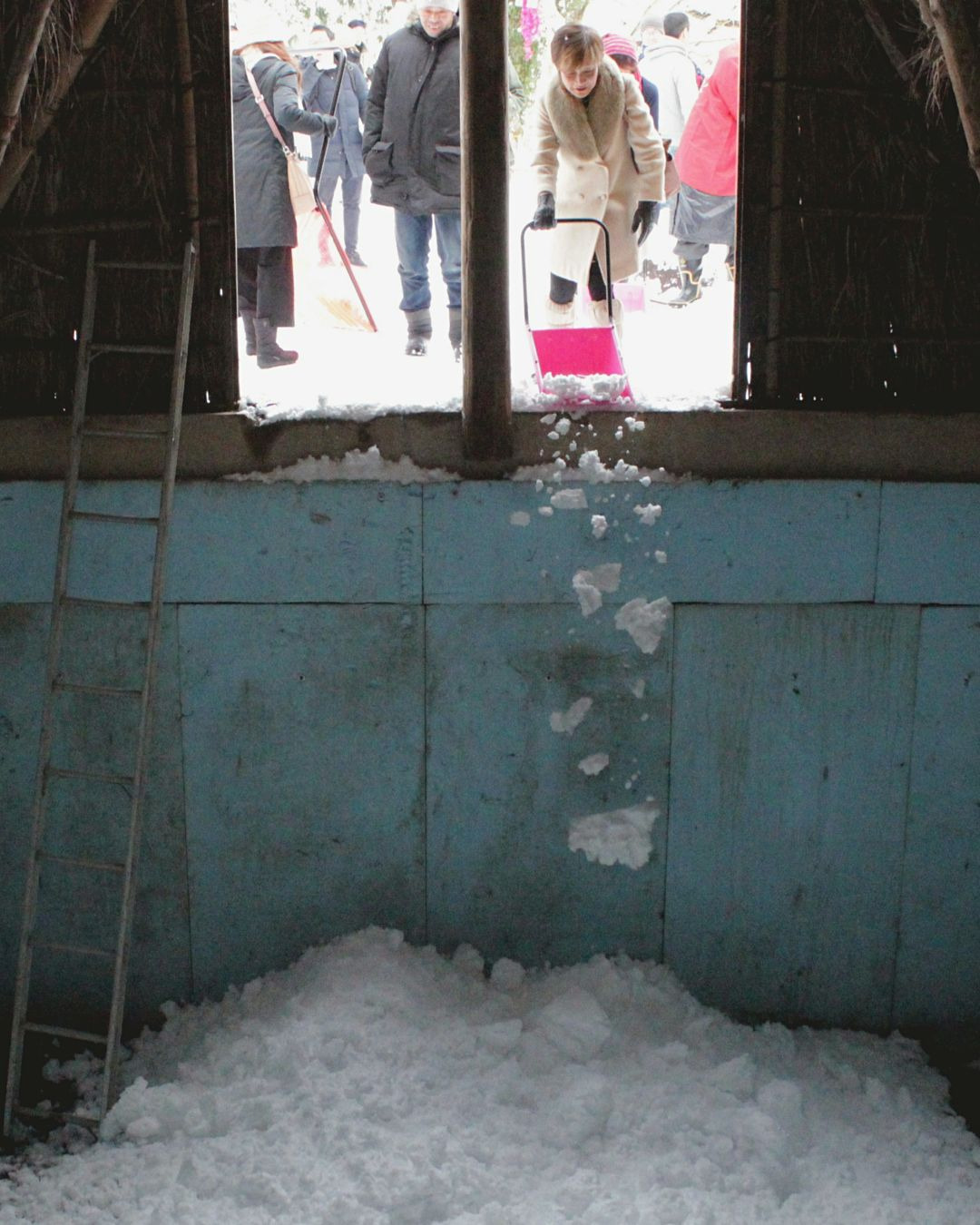 If the snowfall is sufficient, visitors can participate as well. Up to 60 tonnes of snow of can be packed into the hut each year.

The event is also especially child-friendly, as kids are welcome to play in the snow. After the priest’s blessing and the inaugural scoops by government officials, children are called to the front to pile snow with bright pink shovels. Nearby, the local open air museum, Edomura, has bamboo skis and wooden sleds available for use. 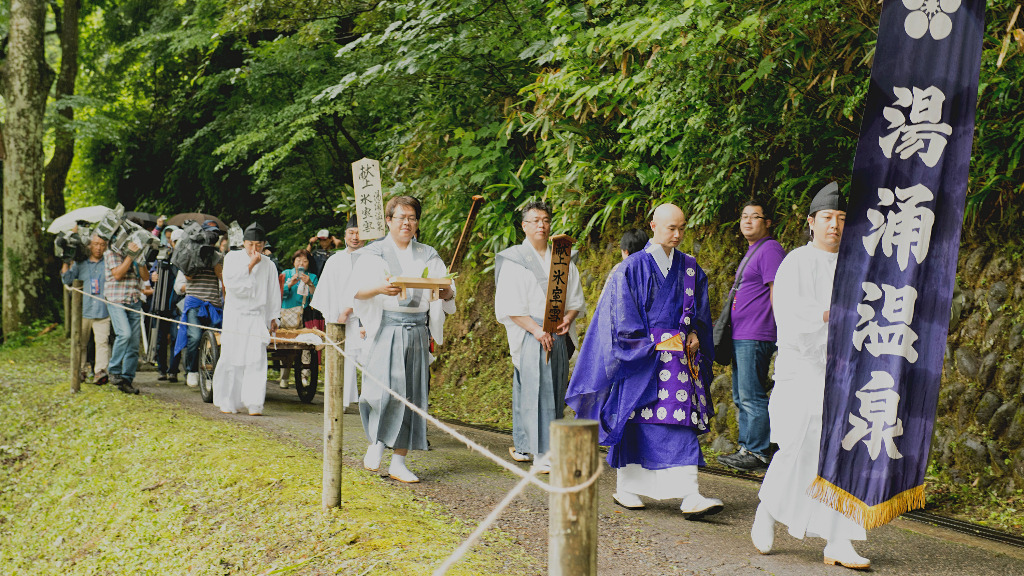 courtesy the city of Kanazawa
After Buddhist opening rites, Himuro Koya is opened up a second time on the last day of June, the first day of summer in the old calendar. The packed snow cut from its contents is Hakusan Ice, named for the nearby sacred mountain, Mt. Haku. 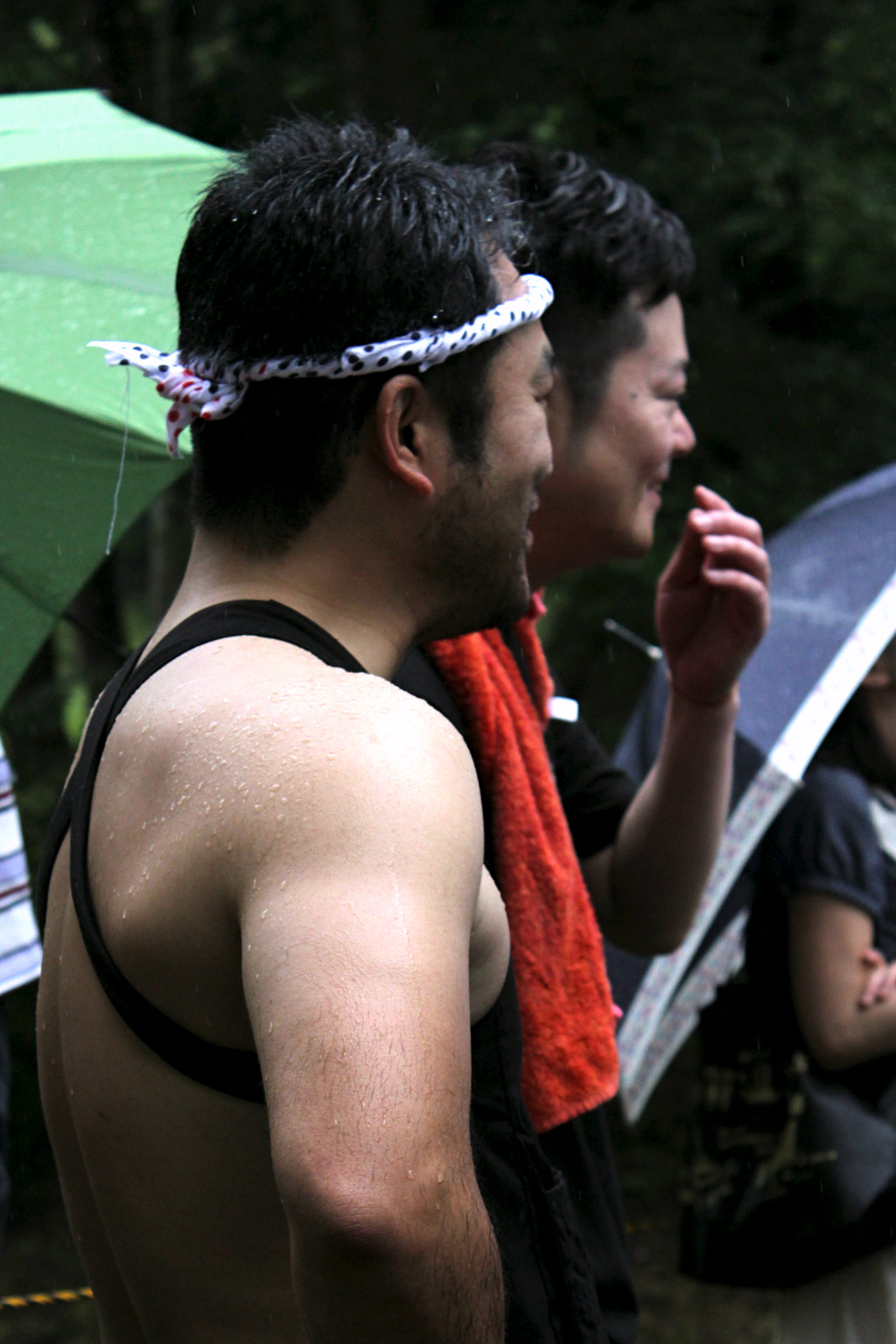 As the summer holiday occurs in the middle of the rainy season, wet weather is often possible. Amid umbrellas, priests and ice-delivery runners will bear the rain to keep the tradition alive.

What to get the samurai who has everything…

Yuwaku’s Himuro Koya began as service to the ruling Tokugawa Shogunate of Edo-era Japan. The prized snows of Kanazawa were preserved for the purpose of delivering Hakusan Ice all the way to the current-day Tokyo as a gift to the Shogun, one of several ways the Kaga Domain attempted to assuage fears of becoming a threat (even as they had the manpower and resources to become so). 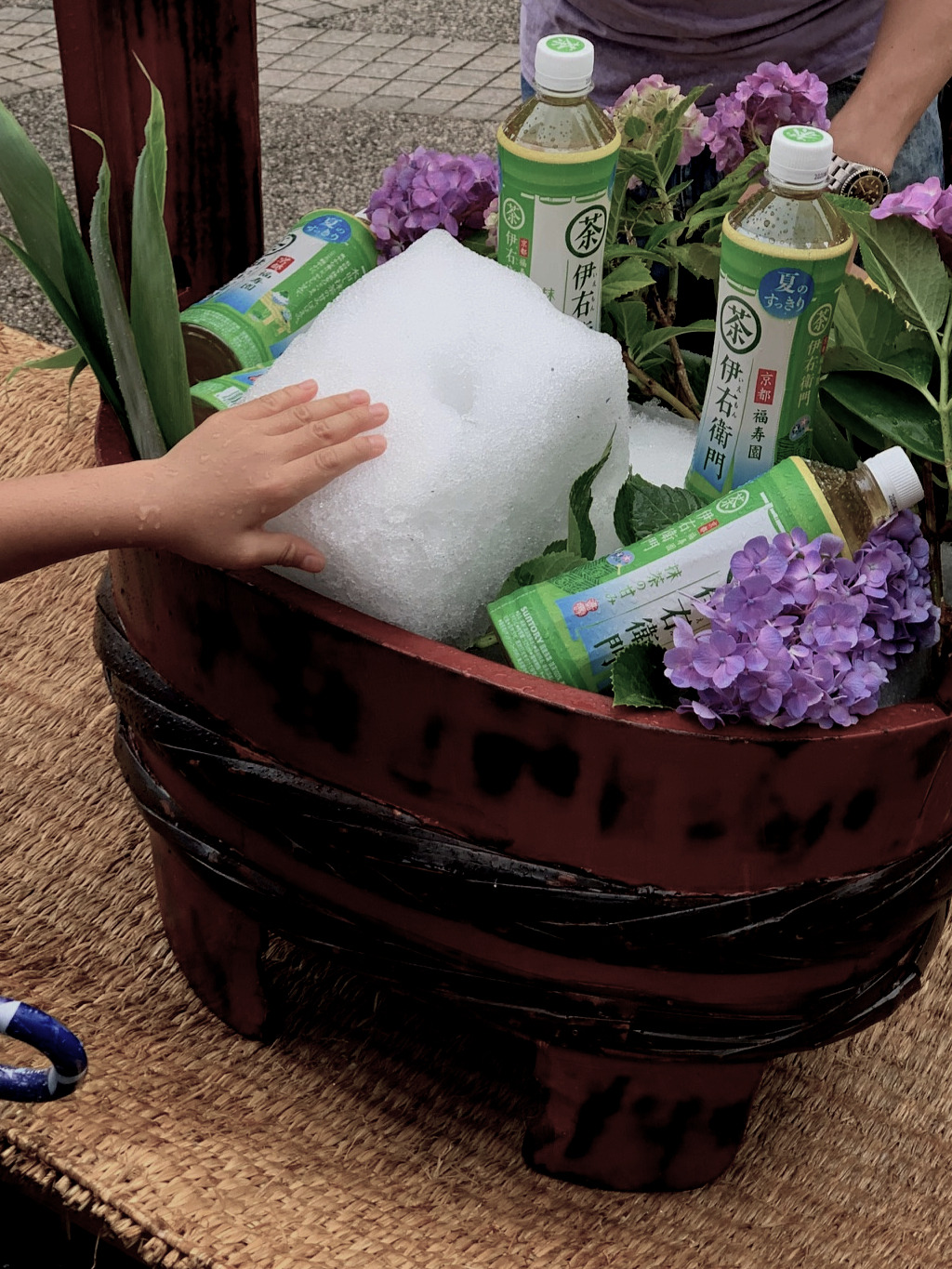 The fifth daimyo to rule the area, Yoshinori Maeda (great-grandson of Japan’s “Little Princess” Tamahime), sought to share the summer treat with the masses, and after his decrees, more ice houses were built. However, even with the increase, preserved ice was highly valued and usually only given as a gift to superiors or for medicinal purposes. 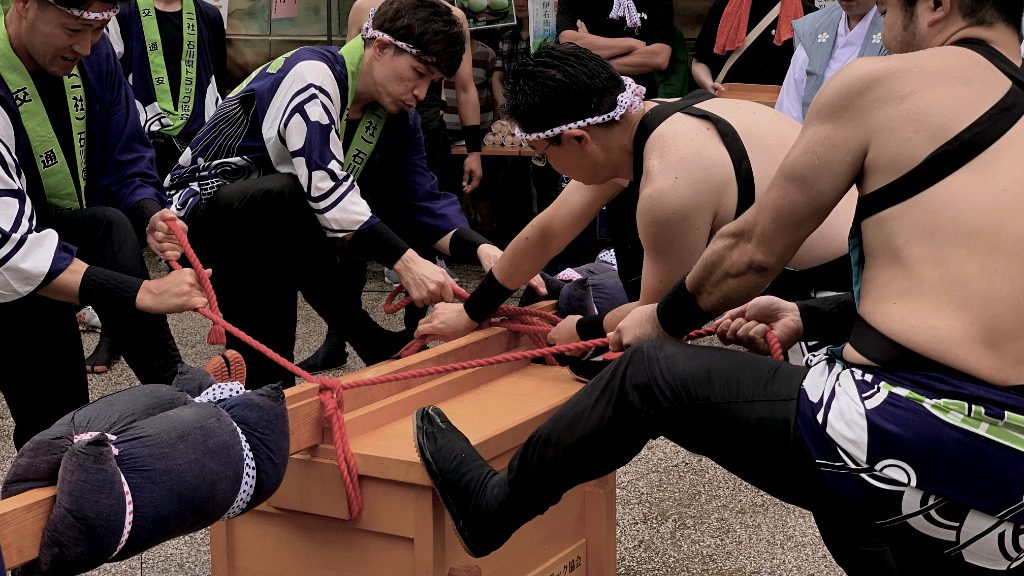 Ice houses remained popular until the early 1940s when machine chilling was introduced to industrially-growing Japan. The restored Himuro Koya is one of the few remaining and still used ice houses in Japan, and the most popular in Ishikawa. 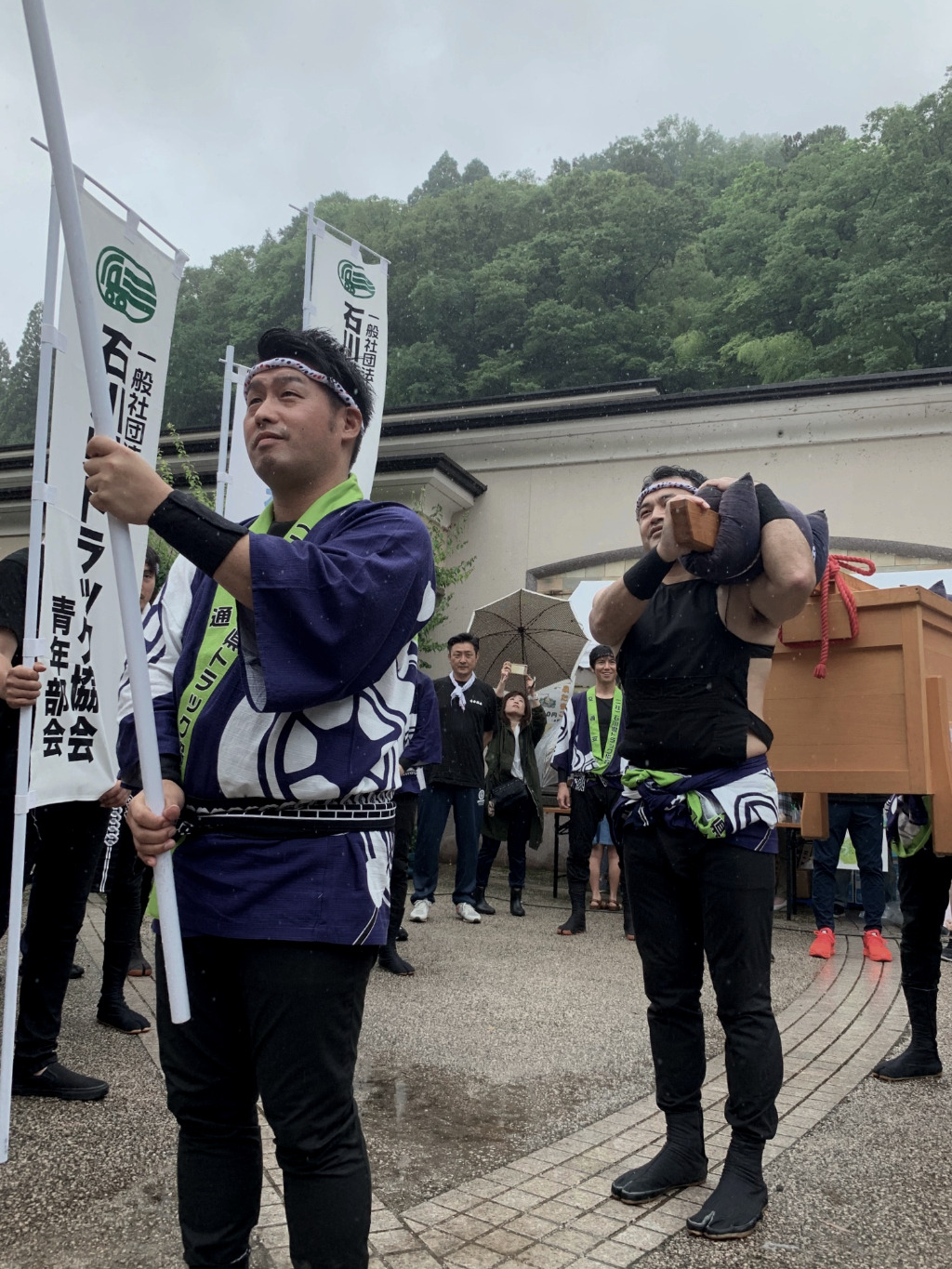 The tradition of gifting ice to lords is still preserved as well, though altered for the modern day, of course. Ice is ceremonially presented to the mayor of Kanazawa, the governor of Ishiakwa, and the Tokyo wards of Itabashi and Meguro, with whom Kanazawa has held good relations for centuries. 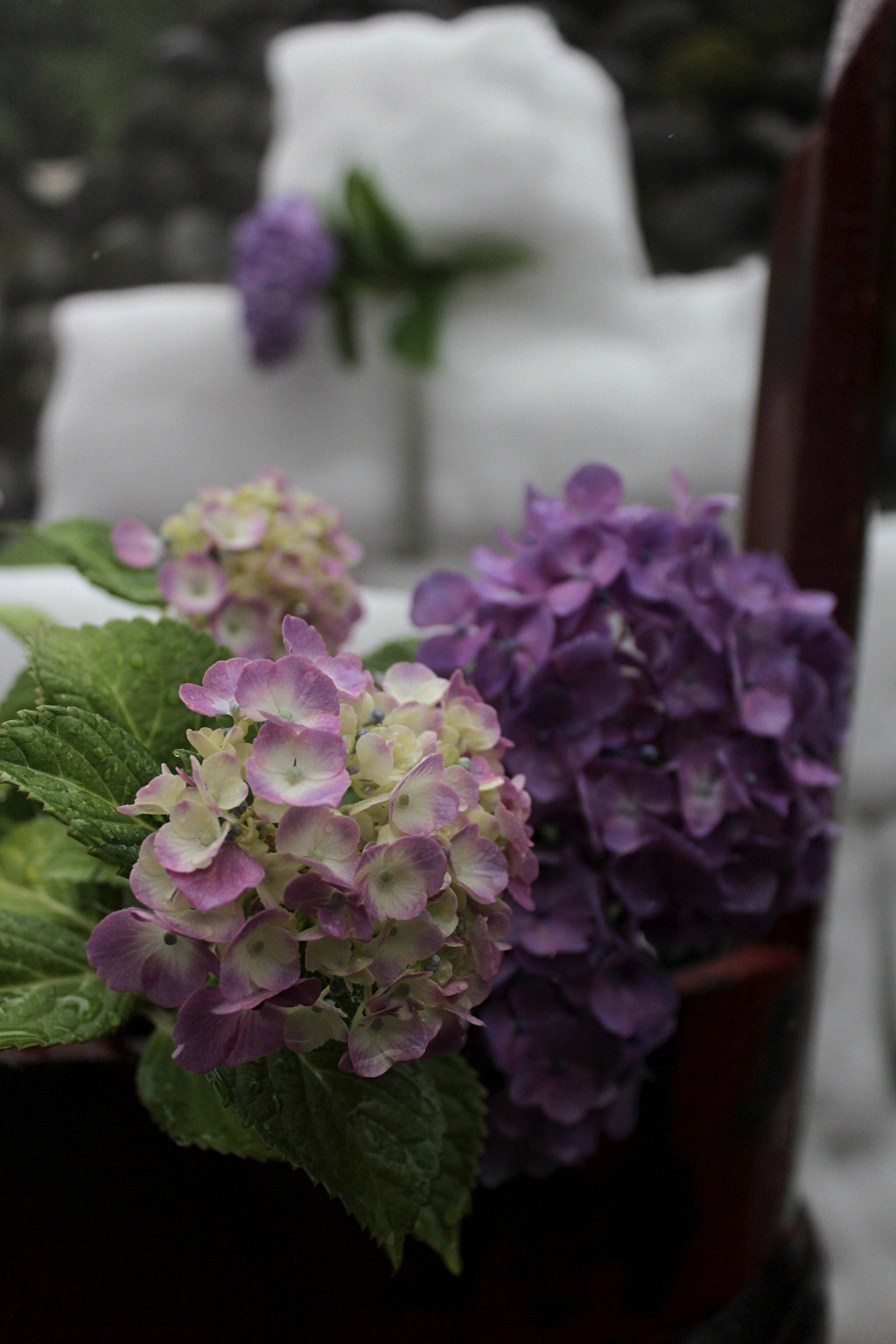 by bus:
10 minutes by bus to Omicho Market or Kanazawa Station
50 minutes by the No. 12 bus bound for Yuwaku (610 yen)
Look for “湯涌温泉 ゆき” on the front or ask the driver “Yuwaku ikimas’ka?”