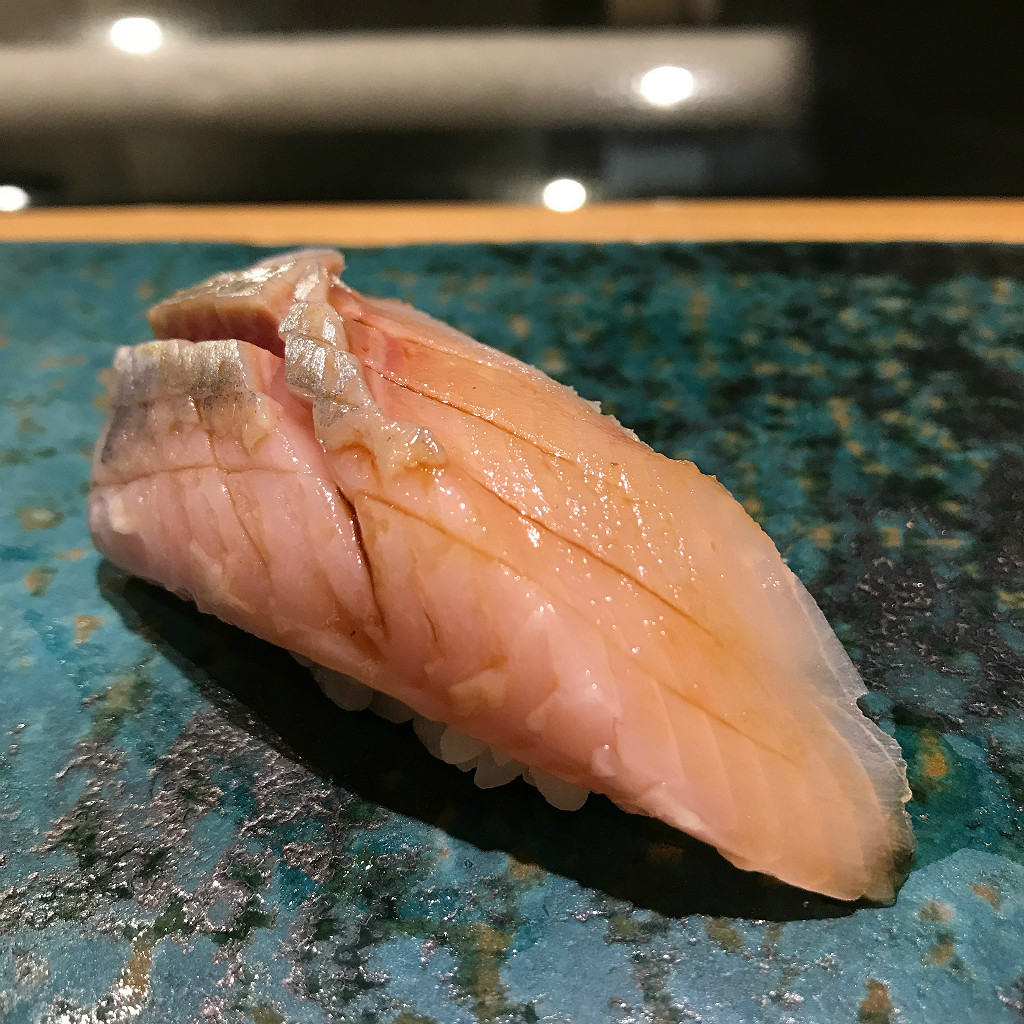 How can you come to Kanazawa and not taste the local sushi??

Off the coast of the Noto Peninsula, warm and cold currents intersect in the East Sea / Sea of Japan. A wide variety of fish, crustaceans, mollusks, and other sea life meet for migration or breeding, and, for the residents of Ishikawa Prefecture and all of the Hokuriku area, for eating!

Catches move quickly from ship to port to market to restaurant. Kanazawa ports like Ono-machi produce the largest catches of dragnet fishing in all of Japan, many of which are exclusive to these waters. The country’s sweet shrimp is one of the most well-known local specialties. 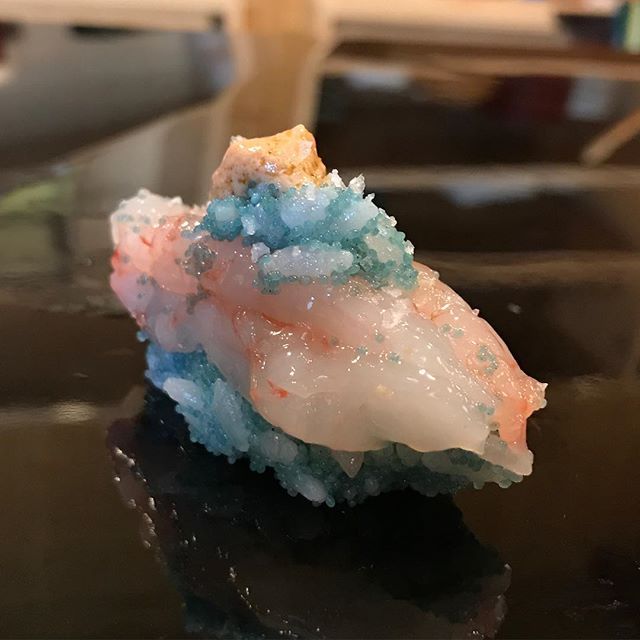 Sweet shrimp is just that: sweet! But the natural, meaty sweetness is unlike sugar or fruit and is much more subdued. The texture is creamy, almost buttery, and lingers on the tongue.

Ama-ebi is sometimes served with the same shrimp’s eggs, a cerulean roe that looks almost unreal. 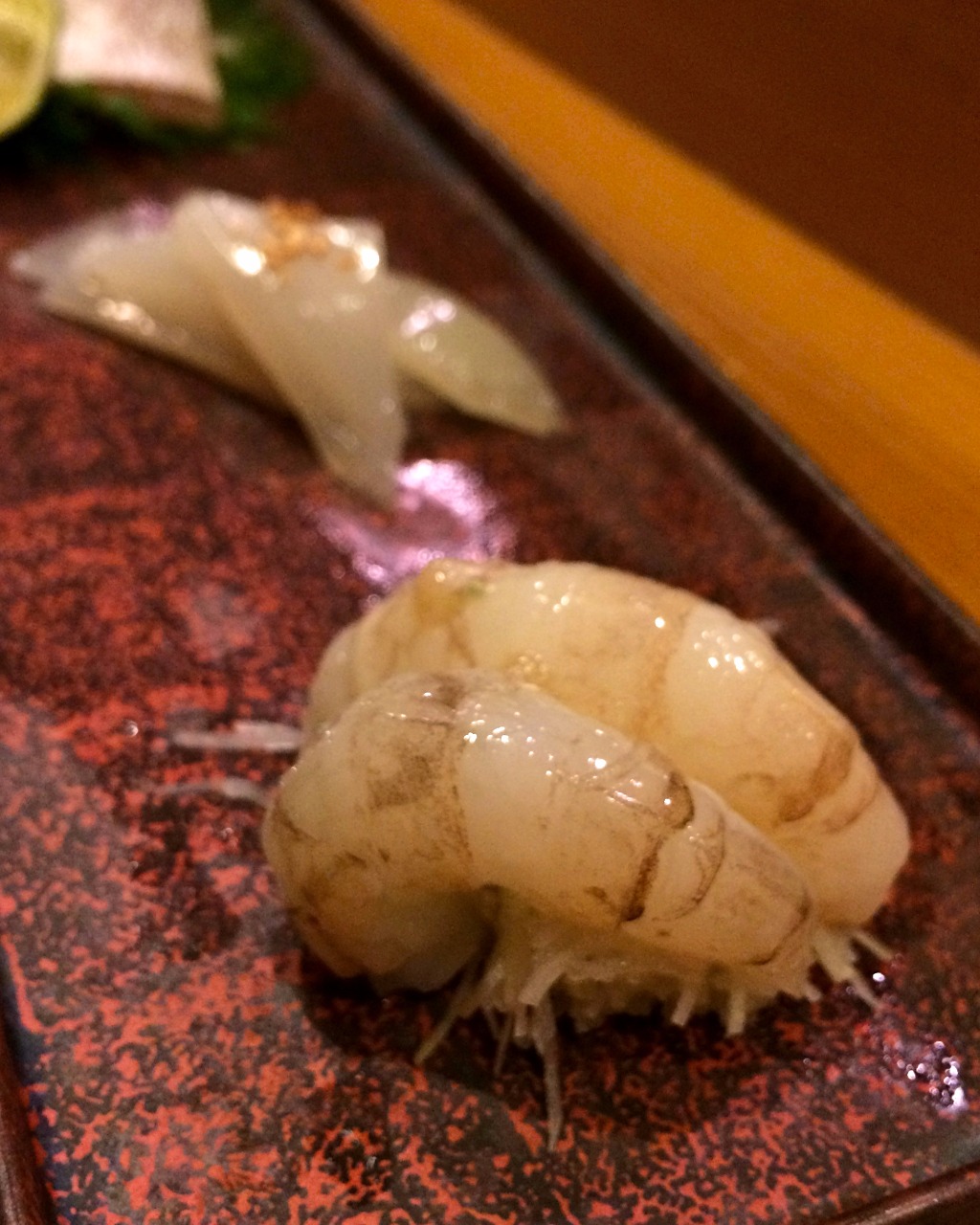 These shrimp are much more rare and pricey than regular sweet shrimp. Not only are they harder to find, they don’t keep fresh for as long, making these very much an exclusively local delicacy.

The white meat is a bit firmer, but the flavor is just as delicate and one of my favorites! 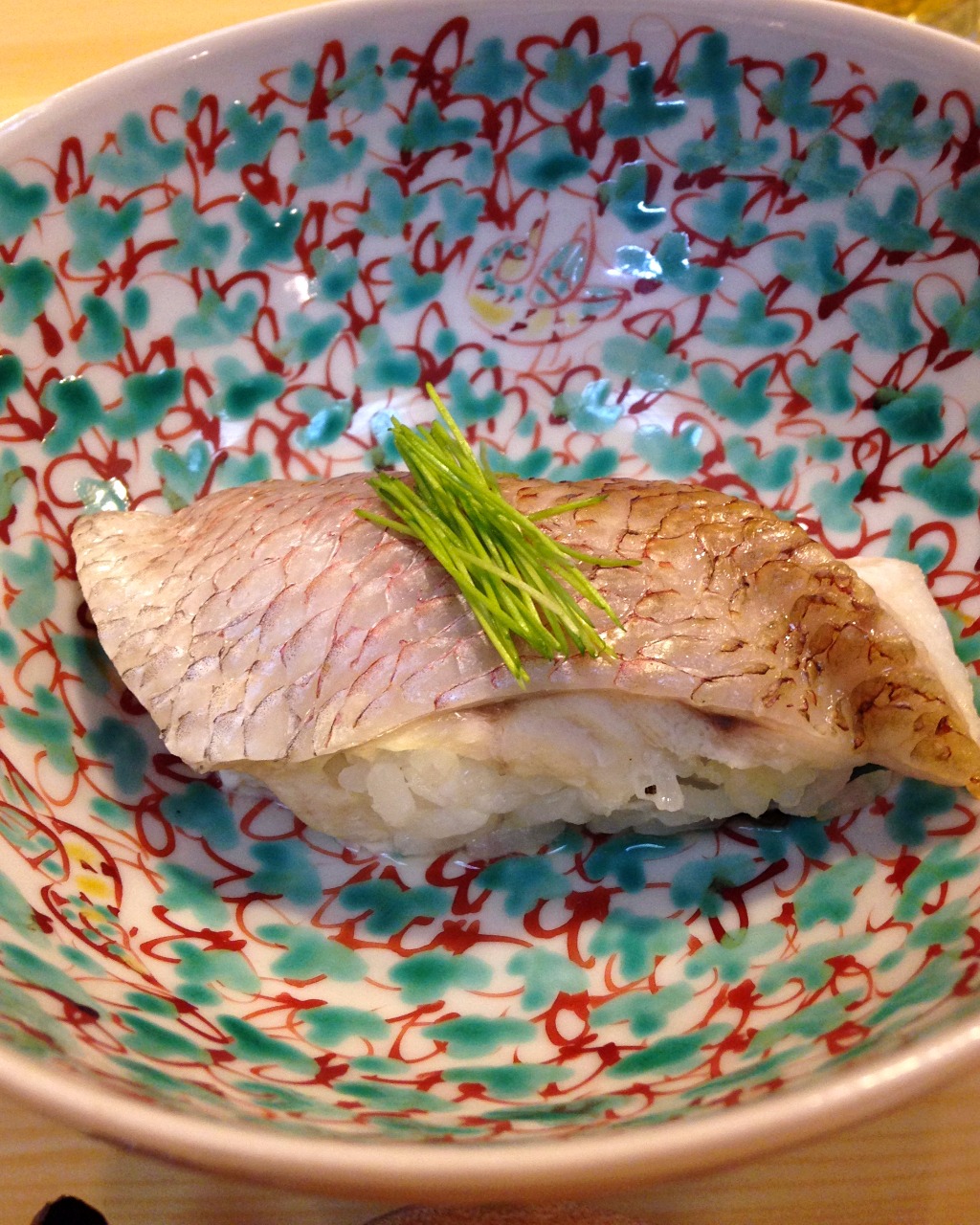 Fatty and mildly sweet, black throat is a common dish throughout Ishikawa. It’s served many ways, but lightly seared with a slice of green yuzu over sushi rice is delectable. 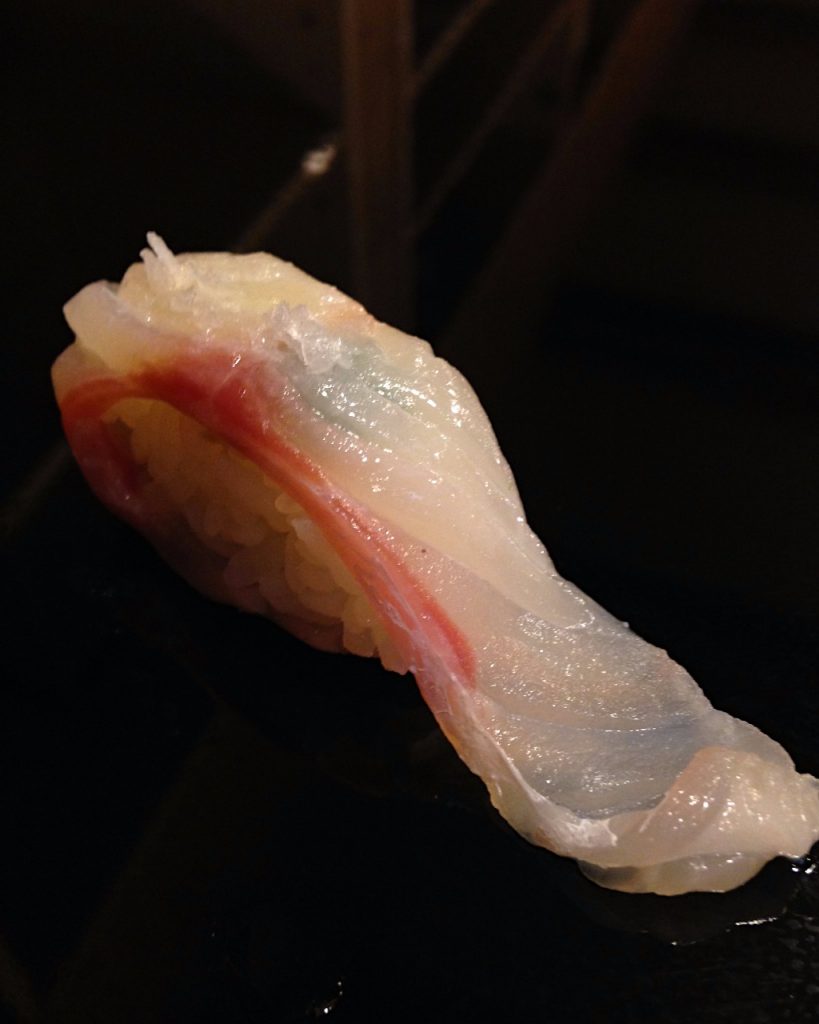 Known throughout most of Japan as kijihata, namera is the red grouper’s local name. This fish goes in mild and becomes richer as you chew, but numbers are beginning to dwindle, making this one more and more expensive and rare.

A delicate fish with a tough skin, this one is often served with a paste made from its richly-flavored liver. 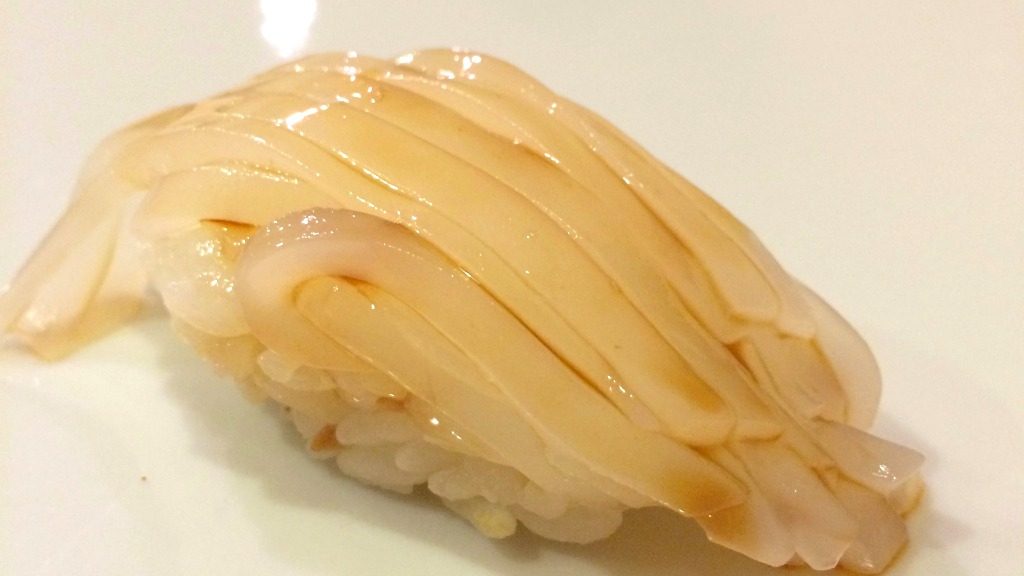 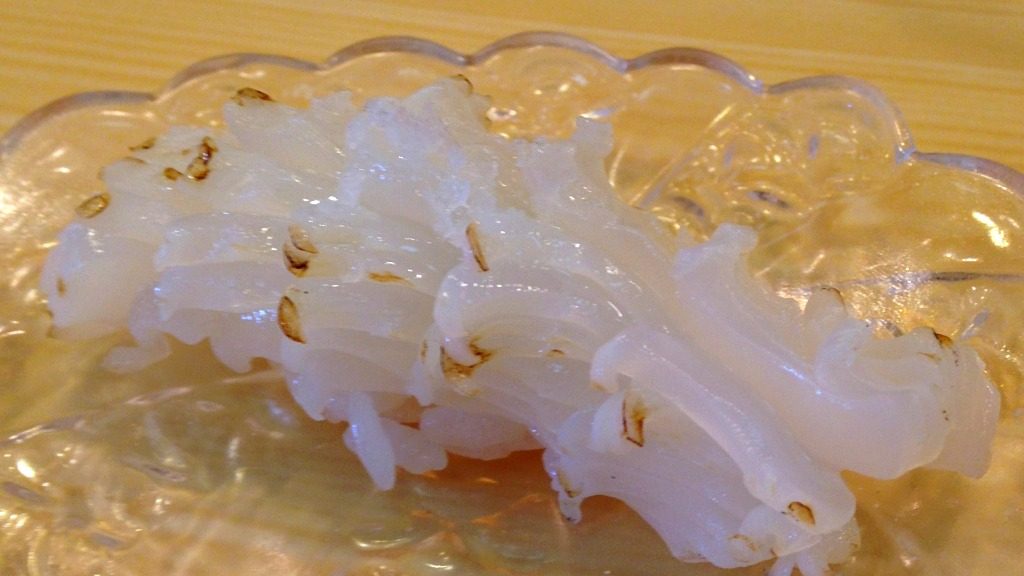 Squid changes with each season, as a different species dominates the sea in turn. In spring, expect to see the Japanese common squid (surume-ika), the swordtip squid in summer (aka-ika), the oval squid in autumn (aori-ika), or in winter, the spear squid (yari-ika).

But not all of these are served as raw fish over rice. In fact, what many visitors think of as “sushi” isn’t what you’ll get in a sushi restaurant! So, allow me to dispel some myths about sushi in Japan.

Not a Diet, but a Dish 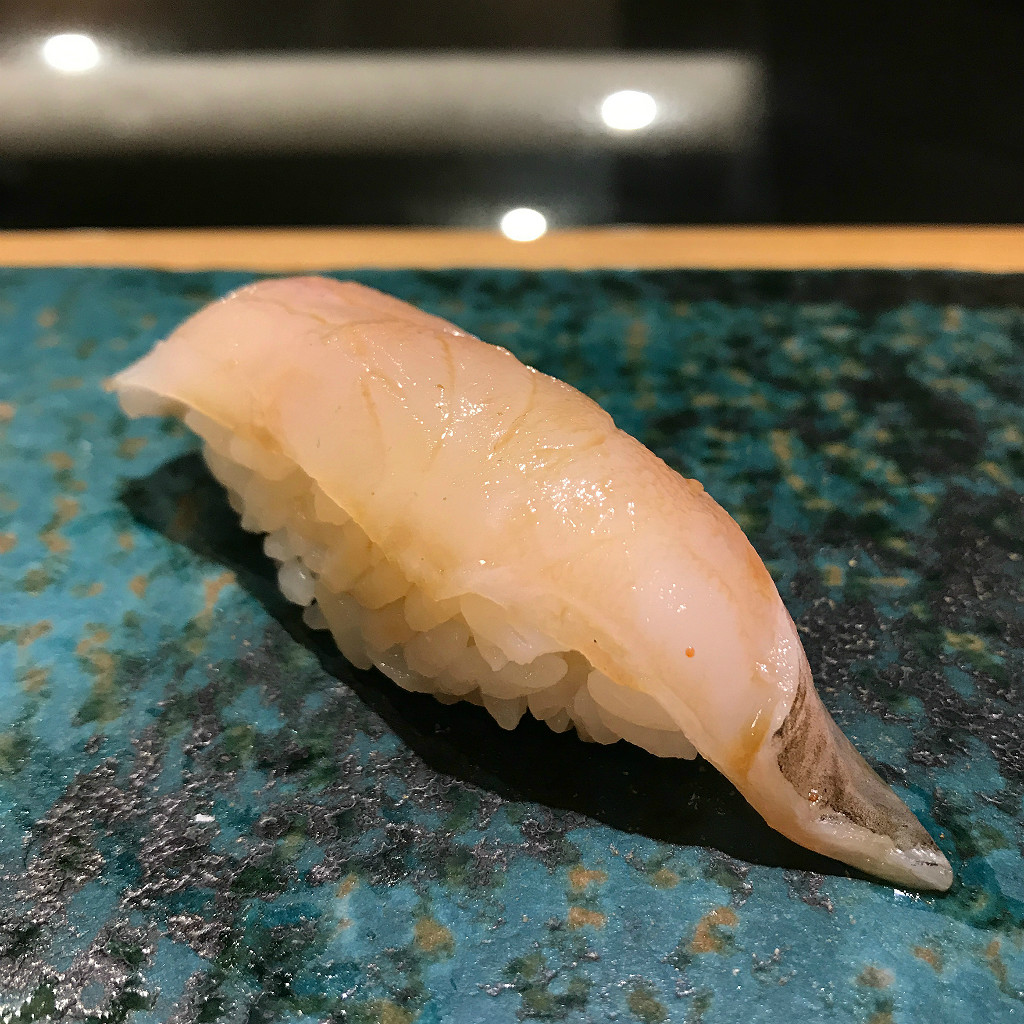 a piece of sushi from Kuratake, a mid-level sushi restaurant near Tatemachi Street *

Sushi is a bite-sized cut of fresh seafood, usually raw or only lightly cooked, served in a bed of vinegar-seasoned rice. In Japanese, it’s called nigiri, which means it’s grabbed by the fingers (though not always so!).

The size and method of the cut and how much vinegar, salt, or other ingredients are added depends on the chef. However, in its essential form, it should be simple and subtle. 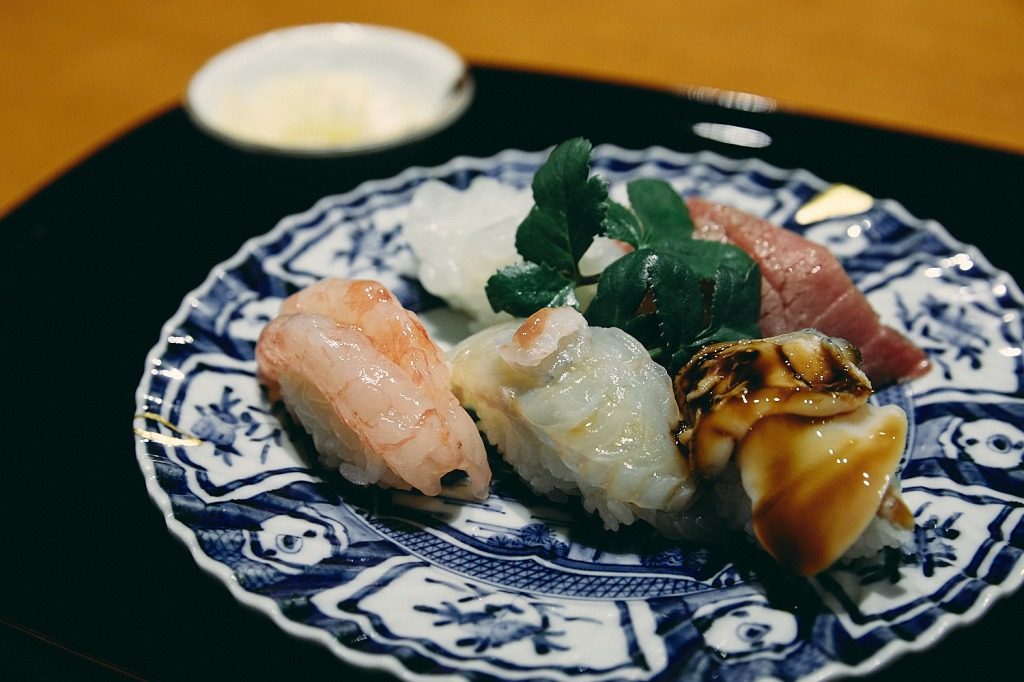 a plate of nigiri at Komatsu Yasuke, the top fine dining restaurant of its kind in Kanazawa *

In the hands of a good chef, the choice of ingredients, method and presentation, will all be well balanced and enhanced.

There are some exceptions to seafood, of course. The fried or baked egg called tamago is a stable of nigiri sets. The style and ingredients of tamago sushi vary by chef and region. Some restaurants serve novelty nigiri, like pickled vegetables or raw beef.

Although some restaurants do serve oshizushi, you’re more likely to find this kind of sushi in bentos and boxes. As you might guess by the name, this type of sushi is fish pressed tightly against rice. The texture is denser and is not usually served with soy sauce, as it would loosen the rice.

A Toyama variety of oshizushi consists of a wheel of masu salmon pressed on rice and cut into triangular slices. 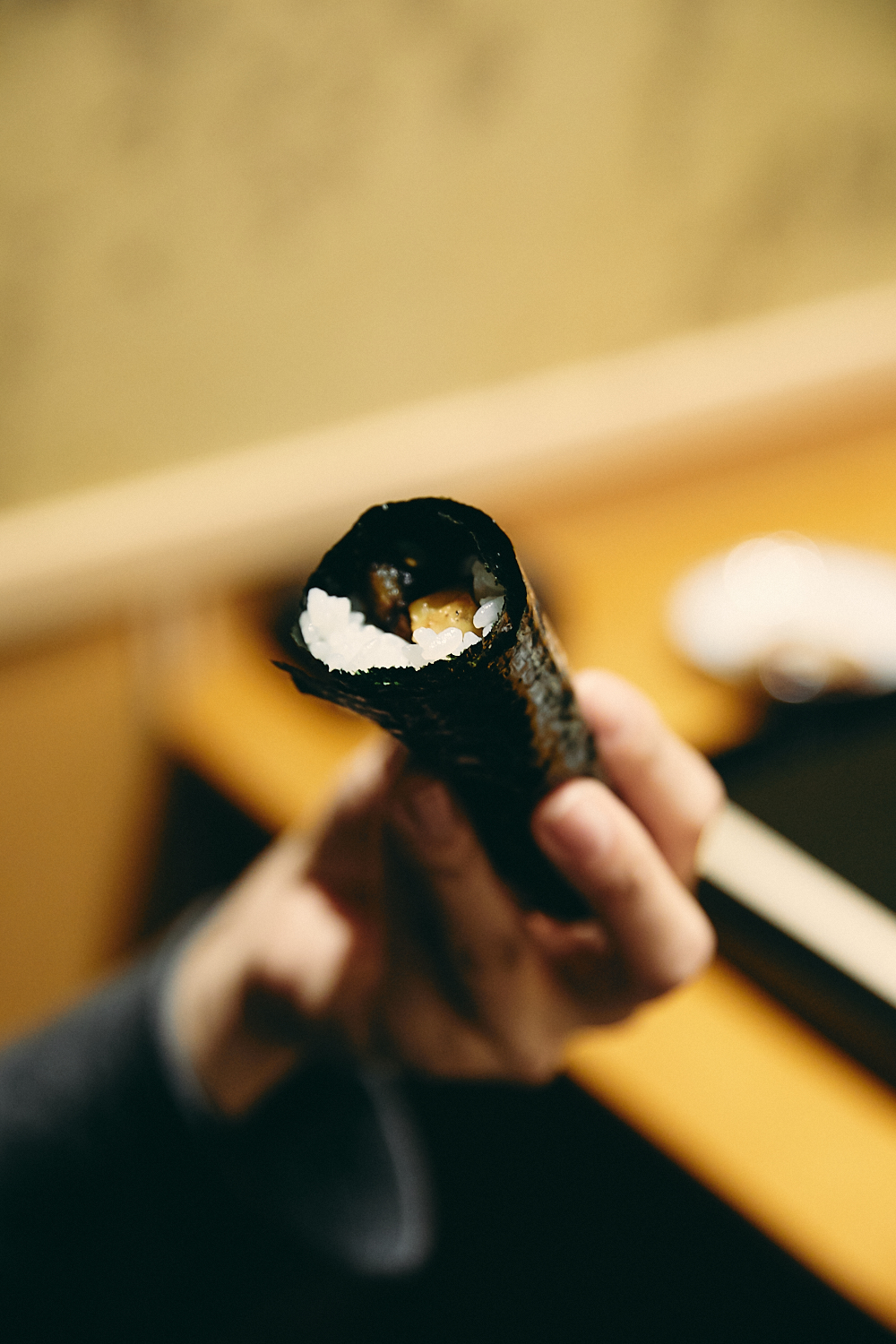 Maki is the rolls of rice with seafood or other ingredients in a casing of seaweed and usually, but not always, sliced. Temaki, a variant, is an uncut cone-shaped roll eaten by hand. 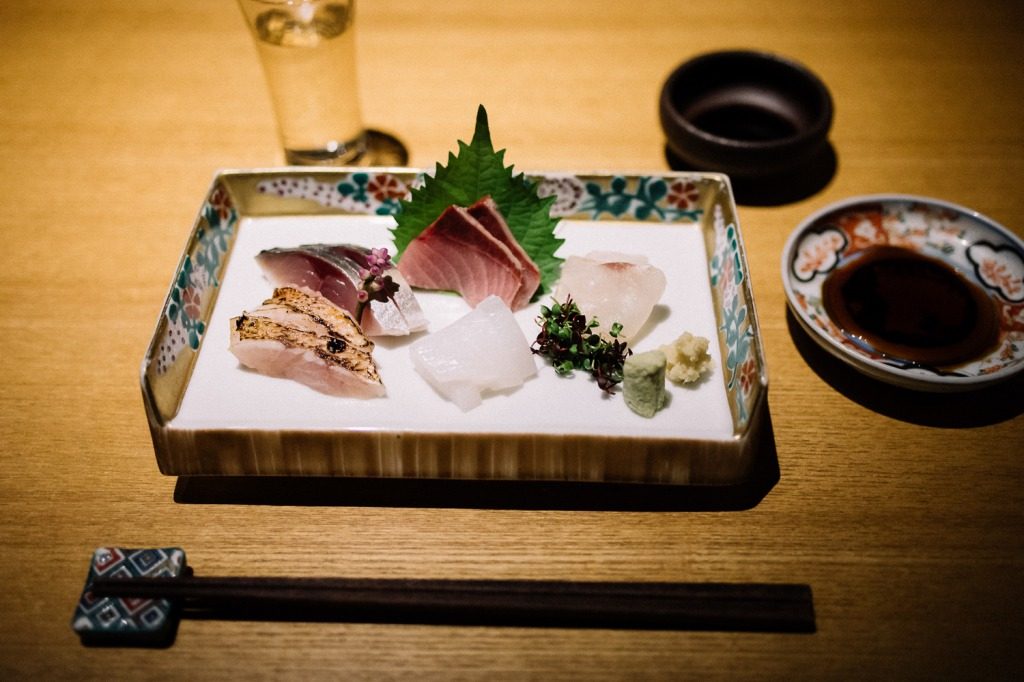 a plate of sashimi at Yasaburo, a Japanese cuisine restaurant *

The cuts of seafood sans rice is sashimi. But don’t mistake sashimi for just rice-less sushi. The sizes and cuts differ, as the chef uses a different approach to working with the food’s flavors and without the salt and vinegar of sushi rice. 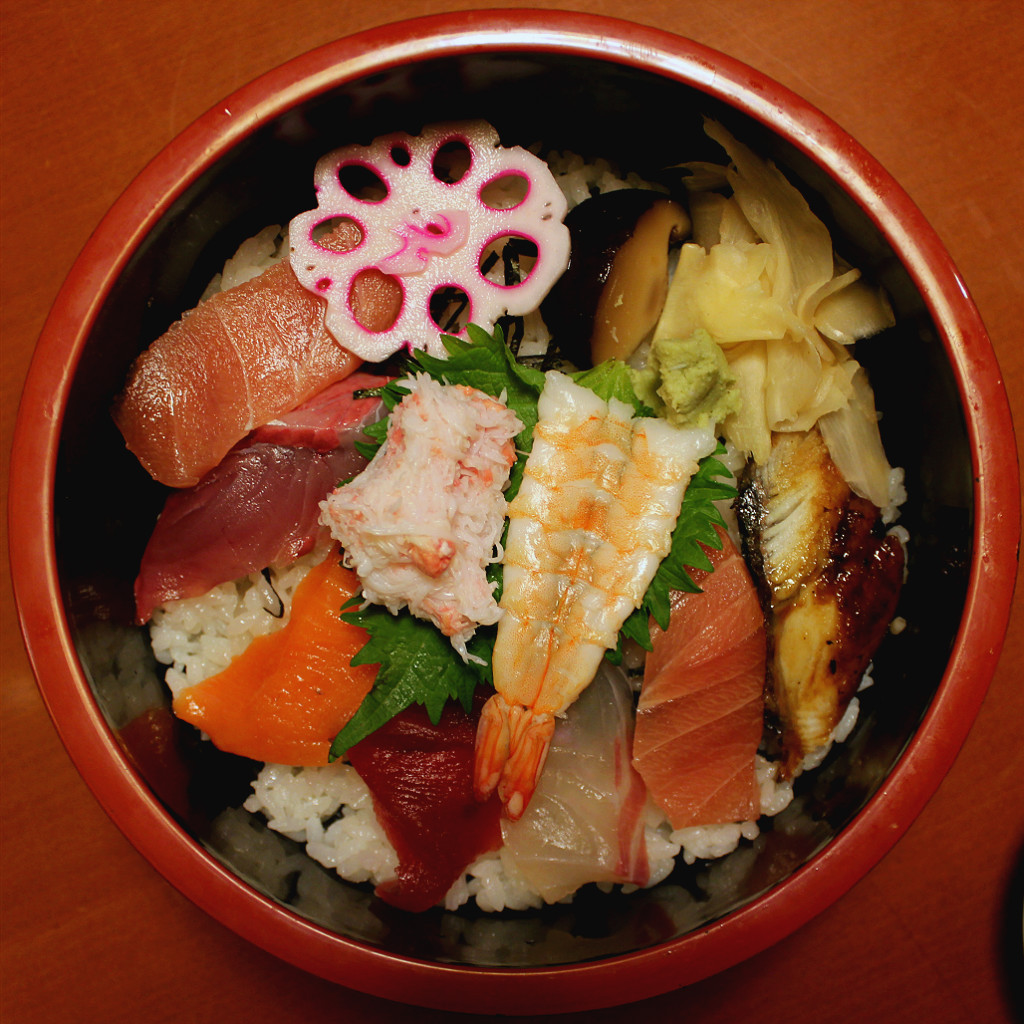 a chirashi bowl from Kourin, a casual dining restaurant

Cuts of seafood with pickles, wasabi and other ingredients on top of a bowl of rice is chirashi. If you pour tea or dashi (fish stock) over it, you have seafood chazuke, a winter favorite.

At many counter restaurants, the chef will serve you in the order they see fit. Easy enough, just eat as you go. Bit if you’re at a table, receive a set, or receive several at once, which piece should be eaten first? 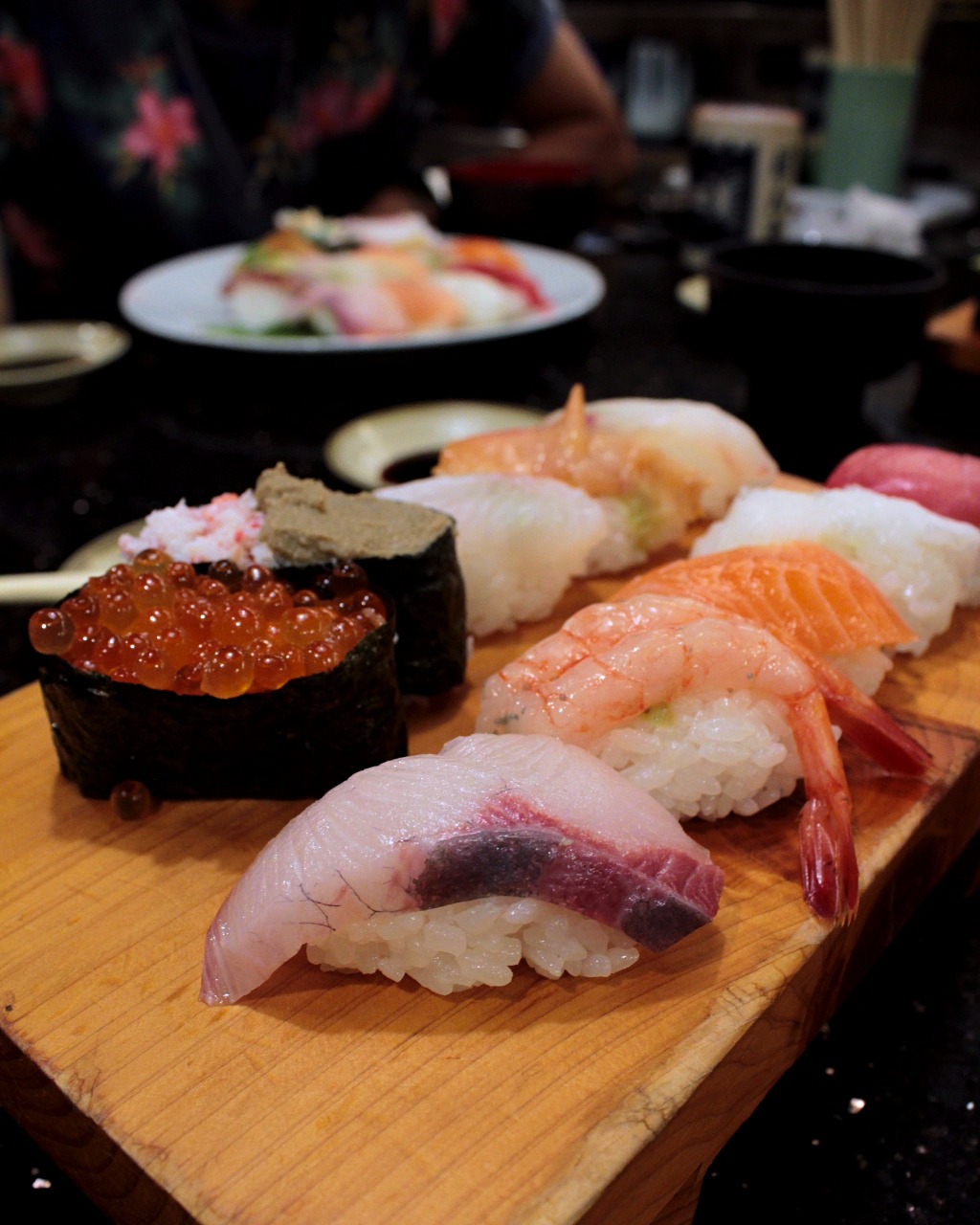 the chef’s selection of nigiri sushi at Ponta, a super-casual conveyor-belt restaurant

There is disagreement about the order that the sushi should be eaten in and no hard rule. In general, however, consuming the sushi across a gradient of white to red is a safe bet. Putting aside the more intense flavors and textures for later can let you enjoy the more subtle ones unobstructed.

Ah, the question that ignites many a battle among sushi connoisseurs. As is the case with whether sake is served hot or cold, the answer is: It depends! The term nigiri sushi literally means “sushi that is grabbed,” and many traditionalists will insist that sushi must be enjoyed with the fingers.

Haruki prefers eating with fingers as “It’s easier. You don’t have to worry about the sushi slipping off accidentally.” But that doesn’t mean chopsticks are off limits. “Disposable bamboo chopsticks are best. They have a good grip for the sushi and your fingers.” Not to mention, if you must have a wood scent with your Japanese cuisine, what better than bamboo! 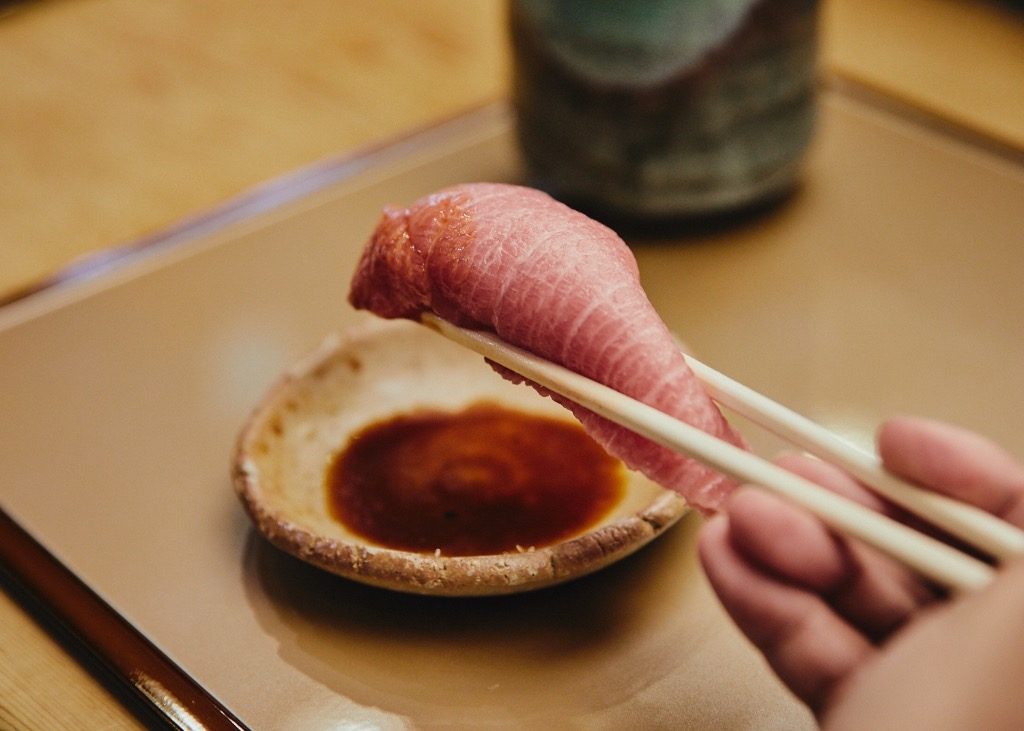 Bamboo chopsticks barely hold the massive pieces of sushi at Matsuno in Kohaku, just outside of Kanazawa. *

However, Nao always prefers chopsticks over fingers. “I like to keep my fingers clean. I even eat potato chips with chopsticks.” But, like Haruki, she’s flexible and suggests asking the chef. “They know best how to enjoy their work.”

Ideally, the piece should be taken in one bite, but it is not unforgivable if you need two bites. Sometimes, a single bite may be impossible. 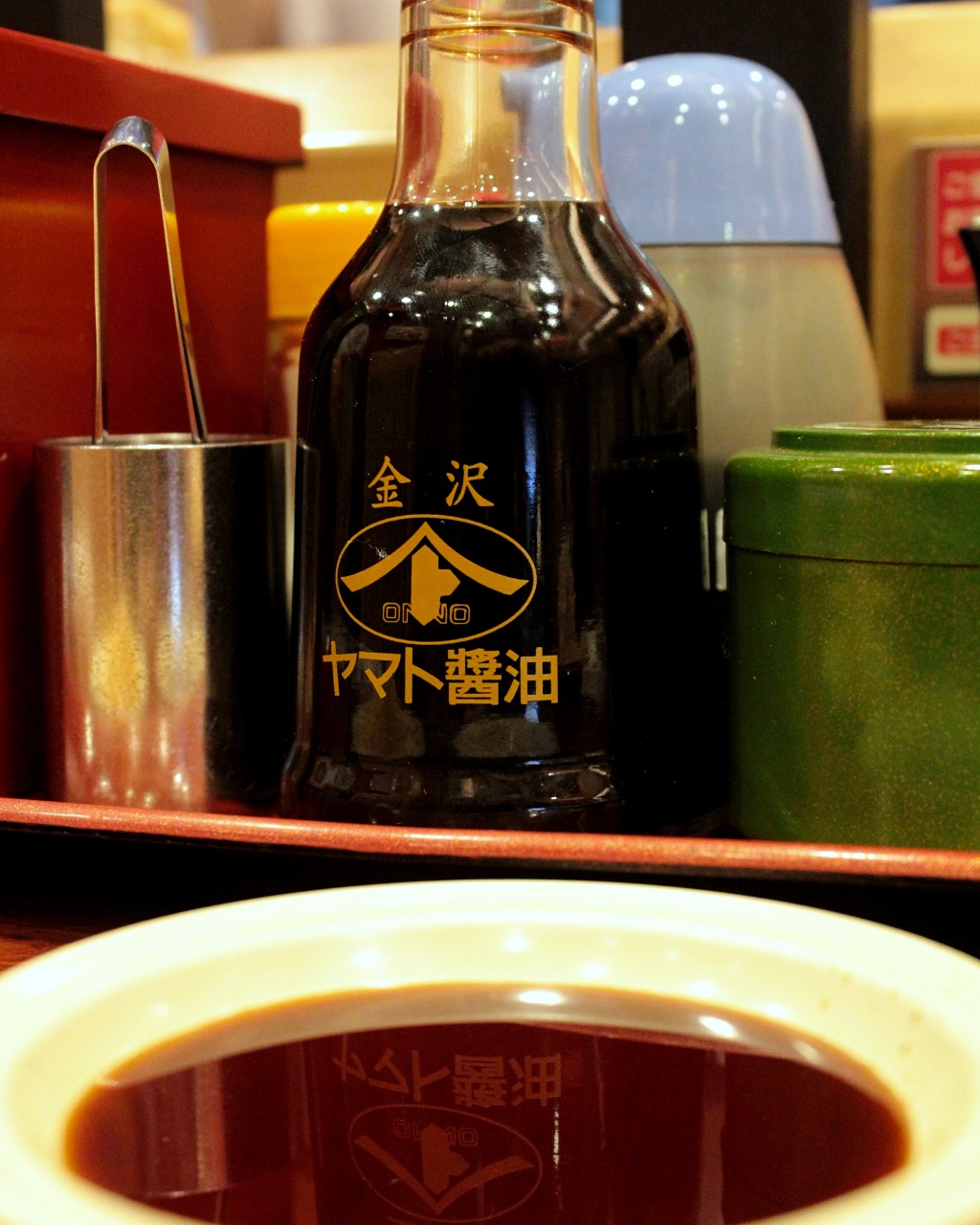 Any piece of sushi that does not already have a sauce or condiments may be dipped in soy sauce. The selective chef will have chosen a soy sauce that is more savory than salty.

One should never soak the sushi, and especially the rice, in too much soy sauce. Most dab the top of the fish into the sauce, though lightly dipping the corner of the rice is also acceptable.

Typically, the chef will apply a small dab of wasabi in the particular pieces of sushi that most benefit from wasabi’s light heat. When a glob of wasabi is given to the diner, the appropriate approach is to use it sparingly and deliberately. The heat should open the sinuses and stimulate the taste buds. It should never overwhelm the fish.

Because some items are better without horseradish, yet still benefit from a dip in soy sauce, it is recommended that one does not mix the former into the latter. This goes double for fine dining. 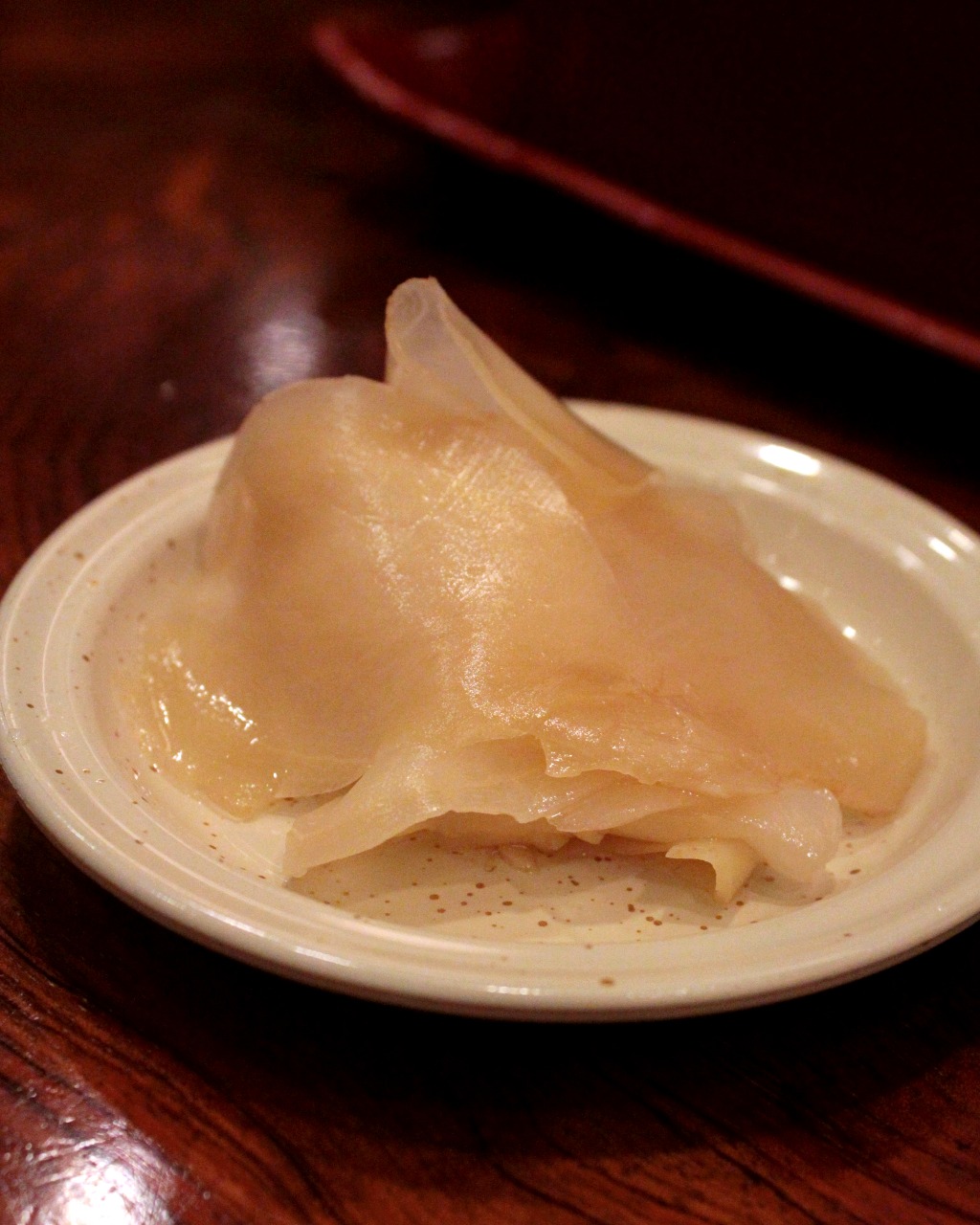 The pickled ginger gari is sometimes called “sushi ginger,” as it’s almost exclusively presented with sushi and sometimes sashimi. Marinated in vinegar and sugar, it is often pale yellow or pink. It may even have antibacterial properties.

Gari is a palate cleanser, keeping the taste buds from tiring out, especially from the presence of soy sauce. Eat as much or as little as you wish between bites, but never mix or add it onto pieces of sushi themselves. 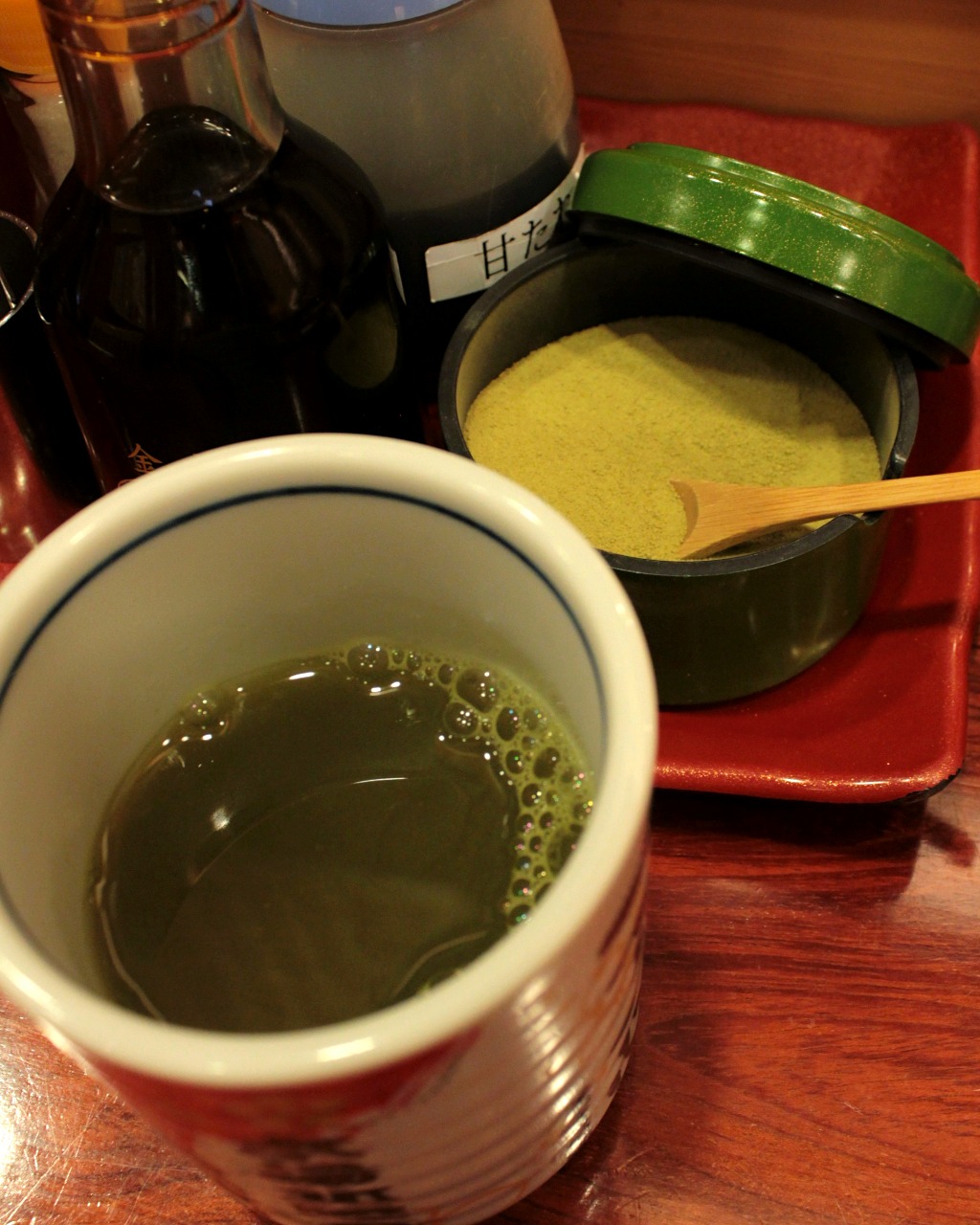 Despite what the Japanese comedic duo Rahmens may suggest in their “The Japanese Tradition: Sushi” instructional video, agari does not mean, “Ah! I am so full, I cannot even eat one more piece of gari, so please give me some tea.” Although, I must admit that is an excellent way to remember when to consume it.

Agari is an inexpensive green tea produced from the cast off pieces of the green tea plant used for high grade matcha. The full name, agaribana, means “the last flower,” denoting it as the last cup of tea for the evening. The custom of drinking a cup of agari is so ubiquitous, that it is more striking not to finish your sushi meal with it.

So, now that you know all about Kanazawa’s local catches and how to enjoy them…

…ready to take on some of our favorite Kanazawa sushi places?